Caló language Belgian French French language
This article is about the French language spoken in Africa. For immigrants to France from Africa, see African immigration to France, Black people in France, and Arabs in France. 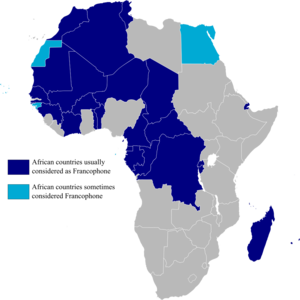 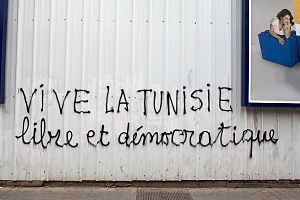 African French (French: français africain) is the generic name of the varieties of a French language spoken by an estimated 430 million people in Africa spread across 29 francophone countries.[3] This includes those who speak French as a first or second language in these 31 francophone African countries (dark blue on the map), but it does not include French speakers living in non-francophone African countries. Africa is thus the continent with the most French speakers in the world.[3] French arrived in Africa as a colonial language; these African French speakers are now a large part of the Francophonie.

In Africa, French is often spoken alongside indigenous languages, but in a number of urban areas (in particular in Central Africa and in the ports located on the Gulf of Guinea) it has become a first language, such as in the region of Abidjan, Ivory Coast,[4] in the urban areas of Douala and Yaoundé in Cameroon or in Libreville, Gabon. In some countries it is a first language among some classes of the population, such as in Tunisia, Morocco, Mauritania and Algeria, where French is a first language among the upper classes (many people in the upper classes are simultaneous bilinguals in Arabic/French), but only a second language among the general population.

In each of the francophone African countries, French is spoken with local variations in pronunciation and vocabulary.

There are many different varieties of African French, but they can be broadly grouped into four categories:

In the colonial period, a vernacular form of creole French known as Petit nègre was also present in West Africa. The term has since, however, become a pejorative term for poorly spoken African French.

V. Y. Mudimbe describes African French as possessing "approximate pronunciation, repressed syntax, bloated or tortured vocabulary, intonation, rhythm and accent stuck in the original African language flow; many phonetic, morphologic and lexical africanisms."[5] The differences from European French are due to influence from the mother tongues and the complexity of French grammatical rules, which inhibit its learning by most non-native speakers.

The difficulty linguists have in describing African French comes from variations, such as the "pure" language used by many African intellectuals and writers versus the mixtures between French and African languages. For this, the term "creolization" is used, often in a pejorative way, and especially in the areas where French is on the same level with one or more local languages. According to Gabriel Manessy, "The consequences of this concurrency may vary according to the social status of the speakers, to their occupations, to their degree of acculturation and thus to the level of their French knowledge."[6]

Code-switching, or the alternation of languages within a single conversation, takes place in both Senegal and Democratic Republic of Congo, the latter having four "national" languages – Kikongo, Lingala, Ciluba and Swahili – which are in a permanent opposition to French. Code-switching has been studied since colonial times by different institutions of linguistics. One of these, located in Dakar, Senegal, already spoke of the creolization[inconsistent] of French in 1968, naming the result "franlof": a mix of French and Wolof (the language most spoken in Senegal) which spreads by its use in urban areas and through schools, where teachers often speak Wolof in the classroom despite official instructions.[7]

The omnipresence of local languages in francophone African countries – along with insufficiencies in education – has given birth to a new linguistic concept: le petit français.[6] Le petit français is the result of a superposition of the structure of a local language with a narrowed lexical knowledge of French. The specific structures, though very different, are juxtaposed, marking the beginning of the creolization process.

In the urban areas of francophone Africa, another type of French has emerged: Français populaire africain ("Popular African French") or FPA. It is used in the entirety of sub-Saharan Africa, but especially in cities such as Abidjan, Ivory Coast; Ouagadougou, Burkina Faso; Dakar, Senegal; Cotonou, Benin; and Lomé, Togo. At its emergence, it was marginalized and associated with the ghetto; Angèle Bassolé-Ouedraogo describes the reaction of the scholars:

Administration and professors do not want to hear that funny-sounding and barbarian language that seems to despise articles and distorts the sense of words. They see in it a harmful influence to the mastery of good French.[8]

However, FPA has begun to emerge as a second language among the upper class. It has also become a symbol of social acceptance.[citation needed]

FPA can be seen as a progressive evolution of Ivorian French. After diffusing out of Ivory Coast, it became Africanized under the influence of young Africans (often students) and cinema, drama, and dance.[citation needed]

FPA has its own grammatical rules and lexicon. For example, "Il ou elle peut me tuer!" or "Il ou elle peut me dja!" can either mean "This person annoys me very much (literally he or she is annoying me to death)" or "I'm dying (out of love) for him/her" depending on the circumstances. "Il ou elle commence à me plaire" signifies a feeling of exasperation (whereupon it actually means "he or she starts to appeal to me"), and friendship can be expressed with "c'est mon môgô sûr" or "c'est mon bramôgo."[8]

FPA is mainly composed of metaphors and images taken from African languages. For example, the upper social class is called "les en-haut d'en-haut" (the above from above) or "les môgôs puissants" (the powerful môgôs).

Pronunciation in the many varieties of African French can be quite varied. There are nonetheless some trends among African French speakers; for instance, the letter R tends to be pronounced as the historic alveolar trill of pre-20th Century French instead of the now standard uvular trill or 'guttural R.' The voiced uvular fricative, the sound represented by ⟨غ⟩ in the Arabic word مغرب Maghrib, is another common alternative. Pronunciation of the letters [d], [t], [l] and [n] may also vary, and intonation may differ from standard French.[citation needed]

In terms of vocabulary, there exist three phenomena in African French. First, the presence of words which do not exist in standard French. These words were either coined locally or borrowed from local African languages. As a consequence, each regional variety of African French has its own local words that are not the same as in other varieties of African French, although this local vocabulary only constitutes a small part of the overall vocabulary which for the most part is identical to standard French. When talking to people from other regions or countries, African French speakers often switch to a more standard form of French avoiding this local vocabulary. However, there also exist some African French words that are found across many African countries (see for example chicotter in the Abidjan French vocabulary section below)[citation needed].

A second phenomenon is the use of some words with a meaning different from standard French. For example, the word présentement (which means "at the moment" in standard French) is used a lot in sub-Saharan Africa (but not in the Maghreb) with the meaning of "as a matter of fact", "as it were" and not "at the moment".

A third phenomenon is hypercorrection, which is found especially among the educated and upper classes of sub-Saharan Africa. Educated people there tend to speak a very formal sort of French which may sound a bit old-fashioned and conservative to European and North American French speakers.

The local African French vocabulary not found in standard French ranges from slang frowned upon by educated people, to colloquial usage, to words that have entered the formal usage (such as chicotter). The French spoken in Abidjan, the largest city of Ivory Coast, offers a good example of these contrasting registers.[citation needed] 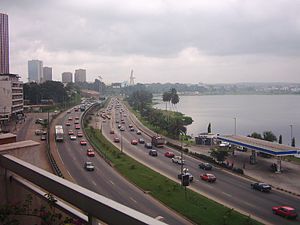 Motorway in the centre of Abidjan 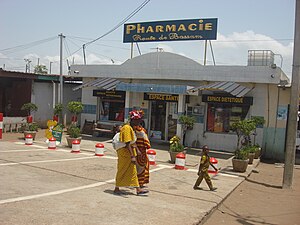 French language signs outside a pharmacy in Port-Bouët, Abidjan, in 2009.

According to some estimates, French is spoken by 75 to 99 percent of Abidjan's population,[9] either alone or alongside indigenous African languages. There are three sorts of French spoken in Abidjan. A formal French is spoken by the educated classes. Most of the population, however, speaks a colloquial form of French known as français de Treichville (after a working-class district of Abidjan) or français de Moussa (after a character in chronicles published by the magazine Ivoire Dimanche which are written in this colloquial Abidjan French). Finally, an Abidjan French slang called nouchi is spoken by people in gangs and also by young people copying them. New words usually appear in nouchi and then make their way into colloquial Abidjan French after some time.[10] As of 2012, a crowdsourced dictionary of Nouchi is being written using mobile phones.[11]

Here are some examples of words used in the African French variety spoken in Abidjan (the spelling used here conforms to French orthography, except ô which is pronounced [ɔ]):[12]

When speaking in a formal context, or when meeting French speakers from outside Ivory Coast, Abidjan speakers would replace these local words with the French standard words une fille, un restaurant or une cantine, un copain, battre and l'argent respectively. Note that some local words are used across several African countries. For example, chicotter is attested not only in Ivory Coast but also in Senegal, Mali, Niger, Burkina Faso, Chad, the Central African Republic, Benin, Togo and the Democratic Republic of the Congo.[10]

As already mentioned, these local words range from slang to formal usage, and their use therefore varies depending on the context. In Abidjan, this is how the sentence "The girl stole my money." is constructed depending on the register:[10] 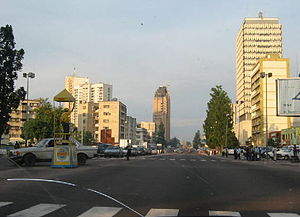 Boulevard du 30 Juin in the commercial heart of Kinshasa

With more than 11 million inhabitants, Kinshasa is the largest francophone city in the world, recently passing Paris in population. It is the capital of the most populous francophone country in the world, the Democratic Republic of the Congo, where an estimated 24 million people (40% of the total population) can speak French (essentially as a second language).[3] Contrary to Abidjan where French is the first language of a large part of the population, in Kinshasa French is only a second language, and its status of lingua franca is shared with Lingala. Kinshasa French also differs from other African French variants, for it has some Belgian French influences, due to colonisation. People of different African mother tongues living in Kinshasa usually speak Lingala to communicate with each other in the street, but French is the language of businesses, administrations, schools, newspapers and televisions. French is also the predominant written language.

Due to its widespread presence in Kinshasa, French has become a local language with its own pronunciation and some local words borrowed for the most part from Lingala. Depending on their social status, some people may mix French and Lingala, or code switch between the two depending on the context. Here are examples of words particular to Kinshasa French. As in Abidjan, there exist various registers and the most educated people may frown upon the use of slangish/Lingala terms.