Francisco de Vitoria OP (c. 1483 – 12 August 1546; also known as Francisco de Victoria) was a Spanish Roman Catholic philosopher, theologian, and jurist of Renaissance Spain. He is the founder of the tradition in philosophy known as the School of Salamanca, noted especially for his contributions to the theory of just war and international law. He has in the past been described by some scholars as one of the "fathers of international law", along with Alberico Gentili and Hugo Grotius, though contemporary academics have suggested that such a description is anachronistic, since the concept of international law did not truly develop until much later.[1][2] American jurist Arthur Nussbaum noted that Vitoria was "the first to set forth the notions (though not the terms) of freedom of commerce and freedom of the seas."[3]

Vitoria was born c. 1483 in Burgos or Vitoria-Gasteiz[citation needed] and was raised in Burgos, the son of Pedro de Vitoria, of Alava, and Catalina de Compludo, both of noble families.[4] As per modern scholarship, he had Jewish ancestry on his maternal side (the Compludos), being related to famous converts like Paul of Burgos and Alfonso de Cartagena.[5] He became a Dominican in 1504, and was educated at the College Saint-Jacques in Paris, where he was influenced by the work of Desiderius Erasmus. He went on to teach theology from 1516 (under the influences of Pierre Crockaert and Thomas Cajetan). In 1522 he returned to Spain to teach theology at the college of Saint Gregory at Valladolid, where many young Dominicans were being trained for missionary work in the New World. In 1524, he was elected to the Chair of theology at the University of Salamanca, where he was instrumental in promoting Thomism (the philosophy and theology of St. Thomas Aquinas). Francisco de Vitoria died on 12 August 1546[6] in Salamanca.

Positions on the status of Amerindians 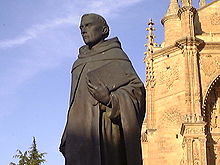 A noted scholar, he was publicly consulted by Charles V, Holy Roman Emperor and King of Spain. He worked to limit the type of power the Spanish Empire imposed on the Native Peoples. He said, "The upshot of all the preceding is this, then, that the aborigines undoubtedly had true dominion in both public and private matters, just like Christians, and that neither their princes nor private persons could be despoiled of their property on the ground of their not being true owners."[7] Vitoria denied that the native peoples could be understood as slaves by nature in Aristotelian terms.[8] He adopted from Aquinas the Roman law concept of ius gentium ("the law of nations"). His defense of American Indians was based on a Scholastic understanding of the intrinsic dignity of man, a dignity he found being violated by Spain's policies in the New World.

In three lectures (relectiones) held between 1537 and 1539 Vitoria concluded that the Indians were rightful owners of their property and that their chiefs validly exercised jurisdiction over their tribes. This had already been the position of Palacios Rubios. Neither the pope nor Charles V had a rightful claim over Indian lives or property. No violent action could be taken against them, nor could their lands or property be seized, unless the Indians had caused harm or injury to the Spanish by violating the latter's lawful rights.[2]

A supporter of the just war theory, in De iure belli Francisco pointed out that the underlying predicate conditions for a "just war" were "wholly lacking in the Indies".[9] The only area where he saw justification for Spanish intervention in native affairs was to protect victims seized for human sacrifice, and because of the inherent human dignity of the victims themselves—whose rights were being violated and thus in need of defense.[9]

Thomas E. Woods goes on to describe how some wished to argue that the natives lacked reason, but the evidence was against this because the natives had obvious customs, laws, and a form of government.[1]

The Spaniards were in the practice of invoking in their American conquests the so-called "Requerimiento", a document read to the Indians before the commencement of any hostilities. The "Requerimiento", declared the universal authority of the Pope, and the authority the Spanish monarchs had received from the Pope over this part of the New World for the purpose of colonizing and evangelizing it. The Indians had to accept the sovereignty of the Spanish monarchs or be compelled to submit by force. Vitoria denied the legitimacy of this document.[4]

Vitoria follows the arguments against Spanish rule of South-American territories by arguments that justify the Spanish practices, which are grounded in natural law. He asserts the right of the Spaniards to travel freely, and to trade, which includes searching for, mining, and exporting the abundant natural resources they find in South America. Unlawful resistance infringing upon the Spaniard's rights of travel, trade and exploitation, or infringing upon the Pope's right to spread Christianity, can be used to justify a "just war" of the Spaniards against the indigenous inhabitants, ending in Spanish rule over the territories in question.[10]

Vitoria's works are known only from his lecture notes, as he has published nothing in his lifetime. Nevertheless, his influence such as that on the Dutch legal philosopher Hugo Grotius was significant.[11] Relectiones XII Theologicae in duo libros distinctae was published posthumously (Antwerp, 1604).[12]

When we postulate invincible ignorance on the subject of baptism or of the Christian faith, it does not follow that a person can be saved without baptism or the Christian faith. For the aborigines to whom no preaching of the faith or Christian religion has come will be damned for mortal sins or for idolatry, but not for the sin of unbelief. As St. Thomas says, however, if they do what in them lies, accompanied by a good life according to the law of nature, it is consistent with God’s providence that he will illuminate them regarding the name of Christ.[15]

Notes of his lectures from 1527 to 1540 were copied by students and published under the following titles: