Joseph Léo François Legault (pronounced [fʁɑ̃swa ləɡo]; born May 26, 1957) is a Canadian politician and businessman serving as the 32nd and current premier of Quebec since 2018. He has been Leader of the Coalition Avenir Québec party since its founding in 2011 and a cabinet minister during the premierships of Lucien Bouchard and Bernard Landry. Prior to becoming a politician, he was the co-founder of the Canadian airline Air Transat.[1]

He returned to the legislature at the 2012 Quebec provincial election as the MNA for L'Assomption, a suburb of Montreal. He was reelected in the 2014 election and won 2018 election. Legault is the first Premier since 1970, when Jean-Jacques Bertrand of the now-defunct Union Nationale party was in office, to not hail from either the Quebec Liberal Party or the Parti Québécois.

François Legault was born on May 26, 1957, at the Lachine Hospital and grew up in Sainte-Anne-de-Bellevue, Quebec. His father, Lucien Legault, was a postmaster. His mother, Pauline Schetagne, was a housewife who also worked as a cashier at the local A&P grocery store.[2]

Legault has a bachelor's and master's degree in business administration from HEC Montréal. He is also a member of the Canadian Institute of Chartered Accountants.[3]

Legault worked as an administrator for Provigo, and an auditor for Ernst & Young until 1984.[4] In 1985, Legault became the director of finance and administration at Nationair Canada and then marketing director at Québécair. He co-founded Air Transat in 1986 after being the director of marketing at Quebecair.[5] He was the Chief Executive Officer of that company until 1997. Air Transat quickly became one of the largest airline companies in Canada offering charter flights. From 1995 to 1998, Legault sat on the boards of various companies, including Provigo Inc., Culinar, Technilab Pharma Inc., Sico, Bestar Inc., and the Marc-Aurèle Fortin private museum.[6]

After his 1998 election, Legault was appointed by Lucien Bouchard as Minister for Industry and Commerce. He was later named the Minister of Education.

When Bouchard resigned, it was said that Legault would support Pauline Marois against Bernard Landry. He later clarified his position as being in favour of Landry's candidacy.

Landry appointed Legault as Minister of Education and later as Minister of Health and Social Services. He was re-elected in 2003 while the PQ lost to the Quebec Liberal Party. He remained on the PQ front bench as the critic for economics, economic development, and finances.

Legault endorsed Richard Legendre in the 2005 PQ leadership election, which was won by André Boisclair. After his re-election in 2007, he was renamed the PQ critic for economic development and finances.

Legault was re-elected in the 2008 elections but announced on June 25, 2009, that would retire from politics.[7][8] He was seen by some political analysts at the time as a potential contender in a future leadership election.[9] However, some members of the Liberals thought that he could replace Jean Charest, then premier.[10]

In February 2011, Legault co-founded with Charles Sirois a new political movement called the "Coalition pour l'avenir du Québec" ("Coalition for the Future of Quebec").[11][12] In November 2011 it became an official party under the name Coalition Avenir Québec (CAQ).[13] The CAQ aims to bring together like-minded voters in a single party regardless of their views on Quebec nationalism, Quebec federalism and Quebec autonomism. In a break with his sovereigntist past, Legault promised that a CAQ government will never hold a referendum on sovereignty.[14] Soon after retiring from politics, he had resigned from the PQ as well after becoming disenchanted with sovereigntism.[15] He now believes Quebec belongs within Canada, but has vowed that a CAQ government would "explore all options" to defend Quebec's interests and demand greater power.[16]

In the 2018 general election on October 1, Legault led the CAQ to a gain of 53 seats for a total of 74, vaulting the CAQ from third place to a majority of 11 and becoming the Premier of Quebec.[20] He is the first premier in 48 years who is not either a Liberal or Péquiste, and the province's first centre-right premier since the Union Nationale's last government left office in 1970. 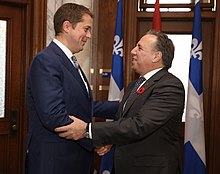 Andrew Scheer with Legault in 2018

On October 18, 2018, Legault was sworn in as Premier of Quebec, marking the end of nearly 50 years of Liberal and Parti Québécois rule in the province.[21] He also announced new members to the province's 26-member cabinet.[21]

Having run on the platform during the 2018 election, on March 28, 2019, the Quebec government tabled its long-awaited secularism bill. Bill 21, entitled "An Act respecting the laicity of the State", if made law, would ban public workers in positions of authority from wearing religious symbols. This would include any public employee who carries a weapon, including police officers, courthouse constables, bodyguards, prison guards and wildlife officers, as well as Crown prosecutors, government lawyers and judges, school principals, vice-principals and teachers.[22]

The government has said that it would use the Notwithstanding clause so as to prevent it from being overturned by the courts.[23]

The bill passed on June 17 by a 73-35 vote, with backing of the Parti Québécois while the Liberals and Quebec solidaire were opposed. The Coalition Avenir Quebec government also introduced a last-minute amendment toughening the law, making provisions for a minister to verify that it is being obeyed and to demand corrective measures if necessary.[24][25]

Under Legault CAQ government, he has decreased immigration numbers to 40,000 in 2019, and he has also in 2019 introduced a values test for immigrants.[26]

Legault apologized to First Nations and Inuit people in October 2019 for discrimination they suffered in dealing with the state, noting the Province of Quebec had failed in its duty to them. He acknowledged, that apologies are but a first step, and more work needs to be done to break down barriers and rectify long-standing problems.[27]

Legault advocated a pragmatic approach to the environment.[28]

During the 2020 coronavirus outbreak, Legault organized daily press conferences with Quebec director of public health Horacio Arruda and Minister of Health Danielle McCann, starting March 12, to encourage the population to stay home and keep hygiene measures that would help suppress spread of the virus.

Legault married Isabelle Brais on March 7, 1992, in Mont-Saint-Hilaire, Quebec,[29] and has two children.[30] He was raised in the Montreal suburb of Sainte-Anne-de-Bellevue.

Legault has been a Fellow of the Ordre des comptables agréés du Québec (Order of Chartered Accountants of Québec) since 2000.[6]