Fractus clouds (scuds) are small, ragged cloud fragments that are usually found under an ambient cloud base. They form or have broken off from a larger cloud, and are generally sheared by strong winds, giving them a jagged, shredded appearance. Fractus have irregular patterns, appearing much like torn pieces of cotton candy. They change constantly, often forming and dissipating rapidly. They do not have clearly defined bases. Sometimes they are persistent and form very near the surface. Common kinds include scud and cloud tags.[1] 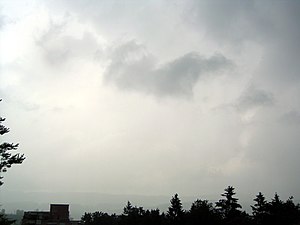 A nimbostratus cloud in the background with a stratus fractus in the middle of the upper half of the image.

Cumulus fractus clouds actually look like ragged cumulus clouds.[1] They may originate from dissipated cumulus clouds, appearing in this case as white ragged clouds located at significant distances from each other. Cumulus fractus in particular form on the leading and trailing edges of summer storms in warm and humid conditions.[2] Observing fractus gives an indication of wind movements under the parent cloud.

Masses of multiple fractus clouds, located under a main cloud, are called pannus. Which a cloud ragged cloud

In rainstorms, scud often form in the updraft area where the air has been cooled by precipitation from the downdraft, thus condensation occurs below the ambient cloud deck. If scud are rising and moving towards the main updraft, sometimes marked by a rain-free base (RFB) or wall cloud, then the thunderstorm is still developing from rising scud.

In addition to forming in inflow, fractus also form in outflow. Scud are very common on the leading edge of a thunderstorm where warm, moist air is lifted by the gust front. Scud are usually found under shelf clouds.[3]