A fossil fuel is a fuel formed by natural processes, such as anaerobic decomposition of buried dead organisms, containing organic molecules originating in ancient photosynthesis[1] that release energy in combustion.[2] Such organisms and their resulting fossil fuels typically have an age of millions of years, and sometimes more than 650 million years.[3] Fossil fuels contain high percentages of carbon and include petroleum, coal, and natural gas.[4] Peat is also sometimes considered a fossil fuel.[5] Commonly used derivatives of fossil fuels include kerosene and propane. Fossil fuels range from volatile materials with low carbon-to-hydrogen ratios (like methane), to liquids (like petroleum), to nonvolatile materials composed of almost pure carbon, like anthracite coal. Methane can be found in hydrocarbon fields alone, associated with oil, or in the form of methane clathrates.

Although fossil fuels are continually formed by natural processes, they are generally classified as non-renewable resources because they take millions of years to form and known viable reserves are being depleted much faster than new ones are generated.[9][10]

Most air pollution deaths are due to fossil fuel combustion products, it is estimated to cost over 3% of global GDP,[11] and fossil fuel phase-out would save 3.6 million lives each year.[12]

The use of fossil fuels raises serious environmental concerns. The burning of fossil fuels produces around 35 billion tonnes (35 gigatonnes) of carbon dioxide (CO2) per year.[13] It is estimated that natural processes can only absorb a small part of that amount, so there is a net increase of many billion tonnes of atmospheric carbon dioxide per year.[14] CO2 is a greenhouse gas that increases radiative forcing and contributes to global warming and ocean acidification. A global movement towards the generation of low-carbon renewable energy is underway to help reduce global greenhouse-gas emissions.

Since oil fields are located only at certain places on earth,[15] only some countries are oil-independent; the other countries depend on the oil-production capacities of these countries

The theory that fossil fuels formed from the fossilized remains of dead plants by exposure to heat and pressure in the Earth's crust over millions of years was first introduced by Andreas Libavius "in his 1597 Alchemia [Alchymia]" and later by Mikhail Lomonosov "as early as 1757 and certainly by 1763".[16] The first use of the term "fossil fuel" occurs in the work of the German chemist Caspar Neumann, in English translation in 1759.[17] The Oxford English Dictionary notes that in the phrase "fossil fuel" the adjective "fossil" means "[o]btained by digging; found buried in the earth", which dates to at least 1652,[18] before the English noun "fossil" came to refer primarily to long-dead organisms in the early 18th century.[19]

Aquatic phytoplankton and zooplankton that died and sedimented in large quantities under anoxic conditions millions of years ago began forming petroleum and natural gas as a result of anaerobic decomposition. Over geological time this organic matter, mixed with mud, became buried under further heavy layers of inorganic sediment. The resulting high temperature and pressure caused the organic matter to chemically alter, first into a waxy material known as kerogen, which is found in oil shales, and then with more heat into liquid and gaseous hydrocarbons in a process known as catagenesis. Despite these heat driven transformations (which increase the energy density compared to typical organic matter by removal of oxygen atoms)[2], the energy released in combustion is still photosynthetic in origin.[1]

Terrestrial plants, on the other hand, tended to form coal and methane. Many of the coal fields date to the Carboniferous period of Earth's history. Terrestrial plants also form type III kerogen, a source of natural gas.

There is a wide range of organic compounds in any given fuel. The specific mixture of hydrocarbons gives a fuel its characteristic properties, such as density, viscosity, boiling point, melting point, etc. Some fuels like natural gas, for instance, contain only very low boiling, gaseous components. Others such as gasoline or diesel contain much higher boiling components. 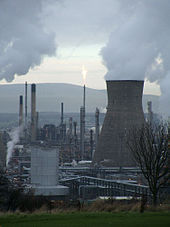 Fossil fuels are of great importance because they can be burned (oxidized to carbon dioxide and water), producing significant amounts of energy per unit mass. The use of coal as a fuel predates recorded history. Coal was used to run furnaces for the smelting of metal ore. While semi-solid hydrocarbons from seeps were also burned in ancient times,[20] they were mostly used for waterproofing and embalming.[21]

Commercial exploitation of petroleum began in the 19th century, largely to replace oils from animal sources (notably whale oil) for use in oil lamps.[22]

Natural gas, once flared-off as an unneeded byproduct of petroleum production, is now considered a very valuable resource.[23] Natural gas deposits are also the main source of helium.

Heavy crude oil, which is much more viscous than conventional crude oil, and oil sands, where bitumen is found mixed with sand and clay, began to become more important as sources of fossil fuel in the early 2000s.[24] Oil shale and similar materials are sedimentary rocks containing kerogen, a complex mixture of high-molecular weight organic compounds, which yield synthetic crude oil when heated (pyrolyzed). With additional processing, they can be employed in lieu of other established fossil fuels. More recently, there has been disinvestment from exploitation of such resources due to their high carbon cost relative to more easily processed reserves.[25]

Prior to the latter half of the 18th century, windmills and watermills provided the energy needed for industry such as milling flour, sawing wood or pumping water, while burning wood or peat provided domestic heat. The wide-scale use of fossil fuels, coal at first and petroleum later, in steam engines enabled the Industrial Revolution. At the same time, gas lights using natural gas or coal gas were coming into wide use. The invention of the internal combustion engine and its use in automobiles and trucks greatly increased the demand for gasoline and diesel oil, both made from fossil fuels. Other forms of transportation, railways and aircraft, also require fossil fuels. The other major use for fossil fuels is in generating electricity and as feedstock for the petrochemical industry. Tar, a leftover of petroleum extraction, is used in construction of roads. 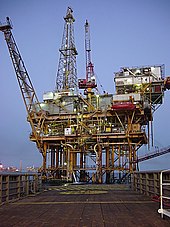 An oil well in the Gulf of Mexico
See also: Oil reserves

P. E. Hodgson, a senior research fellow emeritus in physics at Corpus Christi College, Oxford, expects the world energy use to double every fourteen years and the need to increase faster still, and he insisted in 2008 that the world oil production, a main resource of fossil fuel, was expected to peak in ten years and thereafter fall.[26]

One of the more promising energy alternatives is the use of inedible feed stocks and biomass for carbon dioxide capture as well as biofuel production. While these processes are not without problems, they are currently in practice around the world. Biodiesels are being produced by several companies and are the subject of research at several universities. Processes for converting renewable lipids into usable fuels include hydrotreating and decarboxylation. 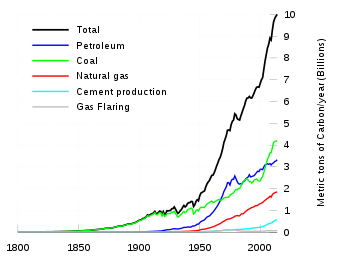 Global fossil carbon emission by fuel type, 1800–2007. Note: Carbon only represents 27% of the mass of CO
2
Main articles: Effects of global warming and Environmental impact of the coal industry

The United States holds less than 5% of the world's population, but due to large houses and private cars, uses more than 25% of the world's supply of fossil fuels.[27] As the largest source of U.S. greenhouse gas emissions, CO2 from fossil fuel combustion accounted for 80 percent of weighted emissions in 1998.[28] Combustion of fossil fuels also produces other air pollutants, such as nitrogen oxides, sulfur dioxide, volatile organic compounds and heavy metals.

According to Environment Canada:

"The electricity sector is unique among industrial sectors in its very large contribution to emissions associated with nearly all air issues. Electricity generation produces a large share of Canadian nitrogen oxides and sulphur dioxide emissions, which contribute to smog and acid rain and the formation of fine particulate matter. It is the largest uncontrolled industrial source of mercury emissions in Canada. Fossil fuel-fired electric power plants also emit carbon dioxide, which may contribute to climate change. In addition, the sector has significant impacts on water and habitat and species. In particular, hydropower dams and transmission lines have significant effects on water and biodiversity."[29]

Carbon dioxide variations over the last 800,000 years, showing a rise since the industrial revolution

According to U.S. scientist Jerry Mahlman, who crafted the IPCC language used to define levels of scientific certainty, the new report will blame fossil fuels for global warming with "virtual certainty," meaning 99% sure. That's a significant jump from "likely," or 66% sure, in the group's last report in 2001. More than 1,600 pages of research went into the new assessment.[30]

Combustion of fossil fuels generates sulfuric and nitric acids, which fall to Earth as acid rain, impacting both natural areas and the built environment. Monuments and sculptures made from marble and limestone are particularly vulnerable, as the acids dissolve calcium carbonate.

Fossil fuels also contain radioactive materials, mainly uranium and thorium, which are released into the atmosphere. In 2000, about 12,000 tonnes of thorium and 5,000 tonnes of uranium were released worldwide from burning coal.[31] It is estimated that during 1982, US coal burning released 155 times as much radioactivity into the atmosphere as the Three Mile Island accident.[32]

Burning coal also generates large amounts of bottom ash and fly ash. These materials are used in a wide variety of applications, utilizing, for example, about 40% of the US production.[33]

Environmental regulation uses a variety of approaches to limit these emissions, such as command-and-control (which mandates the amount of pollution or the technology used), economic incentives, or voluntary programs.

An example of such regulation in the USA is the "EPA is implementing policies to reduce airborne mercury emissions. Under regulations issued in 2005, coal-fired power plants will need to reduce their emissions by 70 percent by 2018.".[34]

In economic terms, pollution from fossil fuels is regarded as a negative externality. Taxation is considered as one way to make societal costs explicit, in order to 'internalize' the cost of pollution. This aims to make fossil fuels more expensive, thereby reducing their use and the amount of associated pollution, along with raising the funds necessary to counteract these effects.[citation needed]

According to Rodman D. Griffin, "The burning of coal and oil have saved inestimable amounts of time and labor while substantially raising living standards around the world".[35] Although the use of fossil fuels may seem beneficial to our lives, it plays a role in global warming and it is said to be dangerous for the future.[35] 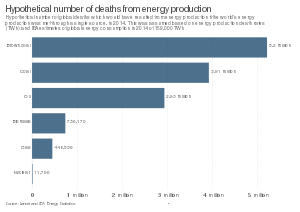 Moreover, this environmental pollution impacts humans because particulates and other air pollution from fossil fuel combustion cause illness and death when inhaled by people. These health effects include premature death, acute respiratory illness, aggravated asthma, chronic bronchitis and decreased lung function. The poor, undernourished, very young and very old, and people with preexisting respiratory disease and other ill health, are more at risk.[36]

In 2014, there were 1,469 oil and gas firms listed on stock exchanges around the world, with a combined market capitalization of US$4.65 trillion.[39] In 2019, Saudi Aramco was listed and it touched a US$2 trillion valuation on its second day of trading,[40] after the world's largest initial public offering.[41]

Fossil fuel prices generally are below their actual costs, or their "efficient prices," when economic externalities, such as the costs of air pollution and global climate destruction, are taken into account. Fossil fuels are subsidized in the amount of $4.7 trillion in 2015, which is equivalent to 6.3% of the 2015 global GDP and are estimated to grow to $5.2 trillion in 2017, which is equivalent to 6.5% of global GDP. The largest five subsidizers in 2015 were the following: China with $1.4 trillion in fossil fuel subsidies, United States with $649 billion, Russia with $551 billion, the European Union with $289 billion, and India with $209 billion. Had there been no subsidies for fossil fuels, global carbon emissions would have been lowered by an estimated 28% in 2015, air-pollution related deaths reduced by 46%, and government revenue increased by $2.8 trillion or 3.8% of GDP.[45]