The head of the FCDO is the Secretary of State for Foreign, Commonwealth and Development Affairs, commonly abbreviated to "Foreign Secretary". This is regarded as one of the four most prestigious positions in the Cabinet – the Great Offices of State – alongside those of Prime Minister, Chancellor of the Exchequer and Home Secretary.

The FCDO is managed from day to day by a civil servant, the Permanent Under-Secretary of State for Foreign Affairs, who also acts as the Head of Her Majesty's Diplomatic Service. This position is held by Sir Philip Barton, who took office on 2 September 2020.

According to the FCDO website, the department's key responsibilities (as of 2020) are as follows:[3]

The FCDO Ministers are as follows:[4][5]

The Foreign Office was formed in March 1782 by combining the Southern and Northern Departments of the Secretary of State, each of which covered both foreign and domestic affairs in their parts of the Kingdom. The two departments' foreign affairs responsibilities became the Foreign Office, whilst their domestic affairs responsibilities were assigned to the Home Office. The Home Office is technically the senior.[6]

The western end of the Foreign and Commonwealth Office's building in 1866, facing St James's Park. It was then occupied by the Foreign and India Offices, while the Home and Colonial Offices occupied the Whitehall end.

During the 19th century, it was not infrequent for the Foreign Office to approach The Times newspaper and ask for continental intelligence, which was often superior to that conveyed by official sources.[7] Examples of journalists who specialized in foreign affairs and were well connected to politicians included: Henry Southern, Valentine Chirol, Harold Nicolson, and Robert Bruce Lockhart.[8]

During the First World War, the Arab Bureau was set up within the British Foreign Office as a section of the Cairo Intelligence Department. During the early cold war an important department was the Information Research Department, set up to counter Soviet propaganda and infiltration. The Foreign Office hired its first woman diplomat, Monica Milne, in 1946.[9]

The Foreign and Commonwealth Office held responsibility for international development issues between 1970 and 1974, and again between 1979 and 1997.

The National Archives website contains a Government timeline to show the departments responsible for Foreign Affairs from 1945.[11]

From 1997, international development became the responsibility of the separate Department for International Development.

When David Miliband took over as Foreign Secretary in June 2007, he set in hand a review of the FCO's strategic priorities. One of the key messages of these discussions was the conclusion that the existing framework of ten international strategic priorities, dating from 2003, was no longer appropriate. Although the framework had been useful in helping the FCO plan its work and allocate its resources, there was agreement that it needed a new framework to drive its work forward.

In August 2005, a report by management consultant group Collinson Grant was made public by Andrew Mackinlay. The report severely criticised the FCO's management structure, noting:

In 2009, Gordon Brown created the position of Chief Scientific Adviser (CSA) to the FCO. The first science adviser was David C. Clary.[13]

On 25 April 2010, the department apologised after The Sunday Telegraph obtained a "foolish" document calling for the upcoming September visit of Pope Benedict XVI to be marked by the launch of "Benedict-branded" condoms, the opening of an abortion clinic and the blessing of a same-sex marriage.[14] 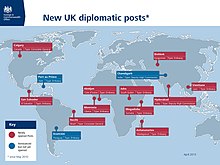 In 2012, the Foreign Office was criticised by Gerald Steinberg, of the Jerusalem-based research institute NGO Monitor, saying that the Foreign Office and the Department for International Development provided more than £500,000 in funding to Palestinian NGOs which he said "promote political attacks on Israel." In response, a spokesman for the Foreign Office said "we are very careful about who and what we fund. The objective of our funding is to support efforts to achieve a two-state solution. Funding a particular project for a limited period of time does not mean that we endorse every single action or public comment made by an NGO or by its employees."[15]

In September 2012, the FCO and the Canadian Department of Foreign Affairs signed a Memorandum of Understanding on diplomatic cooperation, which promotes the co-location of embassies, the joint provision of consular services, and common crisis response. The project has been criticised for further diminishing the UK's influence in Europe.[16]

In 2011, the then Foreign Secretary, William Hague, announced the government's intention to a number of new diplomatic posts in order to enhance the UK's overseas network.[17][18] As such, eight new embassies and six new consulates were opened around the world.[19]

On 16 June 2020, Prime Minister Boris Johnson announced the merger of the FCO with the Department for International Development.[20] This was following the decision in the February 2020 cabinet reshuffle to give cross-departmental briefs to all junior ministers in Department for International Development and the Foreign Office.[21] The merger, which will create the Foreign, Commonwealth and Development Office, is expected to take place in September 2020[22] with a stated aim of ensuring that aid is spent "in line with the UK's priorities overseas."[23] The merger was criticized by three former Prime Ministers - Gordon Brown, Tony Blair and David Cameron, with Cameron saying it would mean "less respect for the UK overseas".[24] The Chief Executive of Save the Children, Kevin Watkins, called it a "reckless, irresponsible and a dereliction of UK leadership" that "threatens to reverse hard-won gains in child survival, nutrition and poverty".[24] 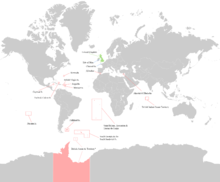 A map of the UK, British Overseas Territories & Crown Dependencies

Despite these efforts at modernization, however, critics both in the UK and in the overseas territories have pointed to the lack of focus on and support for the overseas territories with the relationship between them and the UK needing an overhaul.[27] The Chief Minister of Anguilla, Victor Banks, said: “We are not foreign; neither are we members of the Commonwealth, so we should have a different interface with the UK that is based on mutual respect”.[28]

Following a prior announcement by the then Foreign Secretary William Hague, the FCO opened the Diplomatic Academy in February 2015.[30] The new centre, opened by the Duke of Cambridge, was established in order to create a cross-government centre of excellence for all civil servants working on international issues.[30] The Diplomatic Academy serves to broaden the FCO's network and engaged in more collaborative work with academic and diplomatic partners.[30]

The FCO, through its core departmental budget, funds projects which are in line with its policy priorities outlined in its Single Departmental Plan.[3] This funding includes both Official Development Assistance (ODA), and non-ODA funds. The funds are used for a wide range of projects and serve to support traditional diplomatic activities.[3]

The FCO also supports a number of academic funds:

In April 2006, a new executive agency was established, FCO Services, to provide corporate service functions.[38] It moved to Trading Fund status in April 2008, so that it had the ability to provide services similar to those it already offers to the FCO[39] to other government departments and even to outside businesses.

It is accountable to the Secretary of State for Foreign and Commonwealth Affairs, and provides secure support services to the FCO, other government departments and foreign governments and bodies with which the UK has close links.[40]

For over 10 years, FCO Services has been working globally, to keep customer assets and information safe. FCO Services is a public sector organisation, it is not funded by the public and has to rely on the income it produces to meet its costs, by providing services on a commercial basis to customers both in the UK and throughout the world. Its Accounting Officer and Chief Executive is accountable to the Secretary of State for Foreign & Commonwealth Affairs and to Parliament, for the organisation's performance and conduct.

As well as embassies abroad, the FCO has premises within the UK:

The Foreign and Commonwealth Office occupies a building which originally provided premises for four separate government departments: the Foreign Office, the India Office, the Colonial Office, and the Home Office. Construction on the building began in 1861 and finished in 1868, on the plot of land bounded by Whitehall, King Charles Street, Horse Guards Road and Downing Street. The building was designed by the architect George Gilbert Scott.[43] Its architecture is in the Italianate style; Scott had initially envisaged a Gothic design, but Lord Palmerston, then Prime Minister, insisted on a classical style.[43] The English sculptors Henry Hugh Armstead and John Birnie Philip produced a number of allegorical figures ("Art", "Law", "Commerce", etc.) for the exterior.

In 1925 the Foreign Office played host to the signing of the Locarno Treaties, aimed at reducing tension in Europe. The ceremony took place in a suite of rooms that had been designed for banqueting, which subsequently became known as the Locarno Suite.[44] During the Second World War, the Locarno Suite's fine furnishings were removed or covered up, and it became home to a Foreign Office code-breaking department.[44]

Due to increasing numbers of staff, the offices became increasingly cramped and much of the fine Victorian interior was covered over—especially after the Second World War. In the 1960s, demolition was proposed, as part of major redevelopment plan for the area drawn up by the architect Sir Leslie Martin.[43] A subsequent public outcry prevented these proposals from ever being implemented. Instead, the Foreign Office became a Grade I listed building in 1970.[43] In 1978, the Home Office moved to a new building, easing overcrowding.

With a new sense of the building's historical value, it underwent a 17-year, £100 million restoration process, completed in 1997.[43] The Locarno Suite, used as offices and storage since the Second World War, was fully restored for use in international conferences. The building is now open to the public each year over Open House Weekend.

In 2014 refurbishment to accommodate all Foreign and Commonwealth Office employees into one building was started by Mace.[45]

International relations are handled centrally from Whitehall on behalf of the whole of the United Kingdom and its dependencies. However, the devolved administrations also maintain an overseas presence in the European Union, the USA and China alongside British diplomatic missions. These offices aim to promote their own economies and ensure that devolved interests are taken into account in British foreign policy. Ministers from devolved administrations can attend international negotiations when agreed with the British Government e.g. EU fisheries negotiations.[46] Similarly, ministers from the devolved administrations meet at approximately quarterly intervals through the Joint Ministerial Committee (Europe), chaired by the Foreign Secretary to "discuss matters bearing on devolved responsibilities that are under discussion within the European Union."[citation needed]