The foot (pl. feet), abbreviation and IEEE standard symbol: ft,[1] is a unit of length in the imperial and US customary systems of measurement. The prime symbol, ′, is a customarily used alternative symbol.[2] Since the International Yard and Pound Agreement of 1959, one foot is defined as 0.3048 meter exactly. In customary and imperial units, one foot comprises 12 inches and one yard comprises three feet.

Historically the "foot" was a part of many local systems of units, including the Greek, Roman, Chinese, French, and English systems. It varied in length from country to country, from city to city, and sometimes from trade to trade. Its length was usually between 250 mm and 335 mm and was generally, but not always, subdivided into 12 inches or 16 digits.

The United States is the only industrialized nation that uses the international foot and the survey foot (a customary unit of length) in preference to the meter in its commercial, engineering, and standards activities.[3] The foot is legally recognized in the United Kingdom; road signs must use imperial units (however, distances on road signs are always marked in miles or yards, not feet), while its usage is widespread among the British public as a measurement of height.[4][5] The foot is recognized as an alternative expression of length in Canada[6] officially defined as a unit derived from the meter[7] although both the U.K. and Canada have partially metricated their units of measurement. The measurement of altitude in international aviation is one of the few areas where the foot is used outside the English-speaking world. 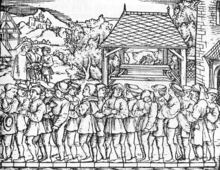 Determination of the rod, using the length of the left foot of 16 randomly chosen people coming from church service. Woodcut published in the book Geometrei by Jakob Köbel (Frankfurt, c. 1535).

Archaeologists believe that the Egyptians, Ancient Indians and Mesopotamians preferred the cubit while the Romans and the Greeks preferred the foot. Under the Harappan linear measures, Indus cities during the Bronze Age used a foot of 13.2 inches (340 mm) and a cubit of 20.8 inches (530 mm).[10] The Egyptian equivalent of the foot—a measure of four palms or 16 digits—was known as the djeser and has been reconstructed as about 30 cm (12 in).

The standard Roman foot (pes) was normally about 295.7 mm (97% of today's measurement), but in the provinces, the so-called pes Drusianus (foot of Nero Claudius Drusus) was used, with a length of about 334 mm. (In reality, this foot predated Drusus.)[13] The Roman foot was standardized by Agrippa at around 296 mm or 11.65 inches.[citation needed]

After the fall of the Roman Empire, some Roman traditions were continued but others fell into disuse. In AD 790 Charlemagne attempted to reform the units of measure in his domains. His units of length were based on the toise and in particular the toise de l'Écritoire, the distance between the fingertips of the outstretched arms of a man.[14] The toise has 6 pieds (feet) each of 326.6 mm (12.86 in).

He was unsuccessful in introducing a standard unit of length throughout his realm: an analysis of the measurements of Charlieu Abbey shows that during the 9th century the Roman foot of 296.1 mm was used; when it was rebuilt in the 10th century, a foot of about 320 mm[Note 1] was used. At the same time, monastic buildings used the Carolingian foot of 340 mm.[Note 1][15]

The procedure for verification of the foot as described in the 16th century posthumously published work by Jacob Koebel in his book Geometrei. Von künstlichem Feldmessen und absehen is:[16][17]

Stand at the door of a church on a Sunday and bid 16 men to stop, tall ones and small ones, as they happen to pass out when the service is finished; then make them put their left feet one behind the other, and the length thus obtained shall be a right and lawful rood to measure and survey the land with, and the 16th part of it shall be the right and lawful foot. 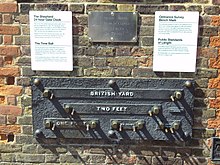 The unofficial public imperial measurement standards erected at the Royal Observatory in Greenwich in the 19th century
See also: Yard

The Neolithic long foot, first proposed by archeologists Mike Parker Pearson and Andrew Chamberlain, is based upon calculations from surveys of Phase 1 elements at Stonehenge. They found that the underlying diameters of the stone circles had been consistently laid out using multiples of a base unit amounting to 30 long feet, which they calculated to be 1.056 of a modern foot (12​43⁄64 inches or 0.3219 m). Furthermore, this unit is identifiable in the dimensions of some stone lintels at the site and in the diameter of the "southern circle" at nearby Durrington Walls. Evidence that this unit was in widespread use across southern Britain is available from the Folkton Drums from Yorkshire (neolithic artifacts, made from chalk, with circumferences that exactly divide as integers into ten long feet) and a similar object, the Lavant drum, excavated at Lavant, Sussex, again with a circumference divisible as a whole number into ten long feet.[18]

The measures of Iron Age Britain are uncertain and proposed reconstructions such as the Megalithic Yard are controversial. Later Welsh legend credited Dyfnwal Moelmud with the establishment of their units, including a foot of 9 inches. The Belgic or North German foot of 335 mm (13.2 inches) was introduced to England either by the Belgic Celts during their invasions prior to the Romans or by the Anglo-Saxons in the 5th and 6th century.

Roman units were introduced following their invasion in AD 43. Following the Roman withdrawal and Saxon invasions, the Roman foot continued to be used in the construction crafts while the Belgic foot was used for land measurement. Both the Welsh and Belgic feet seem to have been based on multiples of the barleycorn, but by as early as 950 the English kings seem to have (ineffectually) ordered measures to be based upon an iron yardstick at Winchester and then London. Henry I was said to have ordered a new standard to be based upon the length of his own arm and, by the c. 1300 Act concerning the Composition of Yards and Perches[19] traditionally credited to Edward I or II, the statute foot was a different measure exactly ​10⁄11 of the old foot. The barleycorn, inch, ell, and yard were likewise shrunk, while rods and furlongs remained the same.[20] The ambiguity over the state of the mile was resolved by the 1593 Act against Converting of Great Houses into Several Tenements and for Restraint of Inmates and Inclosures in and near about the City of London and Westminster, which codified the statute mile as comprising 5,280 feet. The differences among the various physical standard yards around the world, revealed by increasingly powerful microscopes, eventually led to the 1959 adoption of the international foot defined in terms of the meter.

The IEEE standard symbol for a foot is "ft".[1] In some cases, the foot is denoted by a prime, often approximated by an apostrophe, and the inch by a double prime; for example, 2 feet 4 inches is sometimes denoted as 2′ 4″.[2] (See 'minute' for another case where prime and double prime symbols are used to denote first and second cuts in refining measurement.)

In Imperial units, the foot was defined as ​1⁄3 yard, with the yard being realized as a physical standard (separate from the standard meter). The yard standards of the different Commonwealth countries were periodically compared with one another.[22] The value of the United Kingdom primary standard of the yard was determined in terms of the meter by the National Physical Laboratory in 1964 to be 0.9143969 m,[23] implying a pre-1959 UK foot of 0.3047990 m.

The UK adopted the international yard for all purposes through the Weights and Measures Act 1963, effective 1 January 1964.[24]

When the international foot was defined in 1959, a great deal of survey data was already available based on the former definitions, especially in the United States and in India. The small difference between the survey foot and the international foot would not be detectable on a survey of a small parcel, but becomes significant for mapping, or when the state plane coordinate system (SPCS) is used in the US, because the origin of the system may be hundreds of thousands of feet (hundreds of miles) from the point of interest. Hence the previous definitions continued to be used for surveying in the United States and India for many years, and are denoted survey feet to distinguish them from the international foot. The United Kingdom was unaffected by this problem, as the retriangulation of Great Britain (1936–62) had been done in meters.

In the United States, the foot was defined as 12 inches, with the inch being defined by the Mendenhall Order of 1893 as 39.37 inches = 1 m (making a US foot exactly ​1200⁄3937 meters, approximately 0.30480061 m).[25][26] Out of 50 states and six other jurisdictions, 40 have legislated that surveying measures should be based on the U.S. survey foot, six have legislated that they be made on the basis of the international foot, and ten have not specified the conversion factor from metric units.[27]

State legislation is also important for determining the conversion factor to be used for everyday land surveying and real estate transactions, although the difference (2 ppm) is of no practical significance given the precision of normal surveying measurements over short distances (usually much less than a mile).

The National Institute of Standards and Technology, National Geodetic Survey and the Department of Commerce's Office of the General Counsel are planning to phase out the US survey foot beginning in 2022.[28][25]

The Indian survey foot is defined as exactly 0.3047996 m,[29] presumably derived from a measurement of the previous Indian standard of the yard. The current National Topographic Database of the Survey of India is based on the metric WGS-84 datum,[30] which is also used by the Global Positioning System. 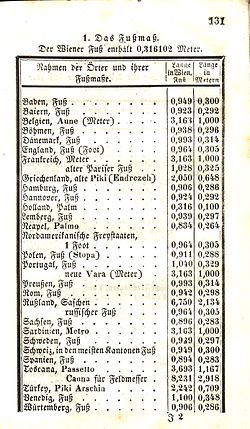 An ISO 2848 measure of 3 basic modules (30 cm) is called a "metric foot", but there were earlier distinct definitions of a metric foot during metrication in France and Germany.

In 1799 the meter became the official unit of length in France. This was not fully enforced, and in 1812 Napoleon introduced the system of mesures usuelles which restored the traditional French measurements in the retail trade, but redefined them in terms of metric units. The foot, or pied métrique, was defined as one third of a meter. This unit continued in use until 1837.[32]

In southwestern Germany in 1806, the Confederation of the Rhine was founded and three different reformed feet were defined, all of which were based on the metric system:[33]

Prior to the introduction of the metric system, many European cities and countries used the foot, but it varied considerably in length: the voet in Ieper, Belgium, was 273.8 millimeters (10.78 in) while the piede in Venice was 347.73 millimeters (13.690 in). Lists of conversion factors between the various units of measure were given in many European reference works including:

Many of these standards were peculiar to a particular city, especially in Germany (which, before German Unification in 1871, consisted of many kingdoms, principalities, free cities and so on). In many cases the length of the unit was not uniquely fixed: for example, the English foot was stated as 11 pouces 2.6 lignes (French inches and lines) by Picard, 11 pouces 3.11 lignes by Maskelyne and 11 pouces 3 lignes by D'Alembert.[41]

The palm (typically 200 mm to 280 mm) was used in many Mediterranean cities instead of the foot. Horace Doursther, whose reference was published[clarification needed] in Belgium which had the smallest foot measurements, grouped both units together, while J.F.G. Palaiseau devoted three chapters to units of length: one for linear measures (palms and feet), one for cloth measures (ells) and one for distances traveled (miles and leagues). In the table below, arbitrary cut-off points of 270 mm and 350 mm have been chosen.

(In Belgium, the words pied (French) and voet (Dutch) would have been used interchangeably.)