A fog desert is a type of desert where fog drip supplies the majority of moisture needed by animal and plant life.[1]

Examples of fog deserts include the Atacama Desert of coastal Chile and Peru, the Baja California Desert of Mexico, the Namib Desert in Namibia,[1] the Arabian Peninsula coastal fog desert,[2] and Biosphere 2, an artificial closed ecosphere in Arizona.

The Atacama Desert, the driest desert in the world, features lomas, areas in which fog condenses against mountain slopes near the sea and creates "fog oases" with an abundant biodiversity of plant and animal species.[3]

Drastic changes in elevation such as mountain ranges allow for maritime winds to settle in specific geographic areas, which is a common theme in fog deserts.[4] The Andes Mountain range is the land form that divides Chile and Peru into inland and coastal regions and allows for the fog desert to form along the Pacific coast. In the Atacama Desert, plant coverage can be as high as 50% in the center fog zone to as low as no life whatsoever above the fog line.[4] Within arid fog deserts with low precipitation levels, fog drip provides the moisture needed for agricultural development. The diverse sections within a fog desert region allow for the growth of a diverse group of plant structures such as succulents, deciduous species, and woody shrub. 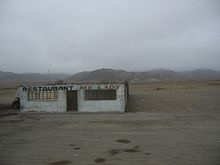 The desert between Lima and Trujillo, Peru. The Andes Mountains, obscured by fog, can be seen in the background.

Humidity in foggy air is above 95%.[5] One way for fog to form in deserts is through the interaction of hot humid air with a cooler object, such as a mountain.[6] When warm air hits cooler objects, fog is composed. Another way for fog to form in deserts, is if the desert is close to the coast and that coast has some cold currents running through it. When air heated in the desert land blows towards the cool water in the ocean, it gets cooler and fog is formed. The cool fog would then get blown inland by the ocean breeze. Fog is mainly formed in the early morning or after sunset.[7]

There are certain types of plants and animals that live in fog deserts. Almost all of them depend on water contained in the fog for their survival which is evident in the way they have developed adaptations to collect water.[5] An example would be the Stenocara beetle that lives in the Namib Desert; the beetle climbs the sand dunes when the humid wind is blowing from the ocean and transforms fog into drops of water.[8] An example of a plant would be Welwitschia which also grows in the Namib desert and grows only two leaves through its life which can be up to 1000 years. The leaves have large pores to help it absorb water from the fog forming on them. People also living in the Namib depend on techniques to collect water from fog.[9] A lot of technologies are being developed to help extract water from desert air[10] Fog harvesters are undergoing improvements based on our observations of the adaptations of some of the beings in fog deserts like the Stenocara beetle. Devices being developed to extract water from air desert use Metal Organic Framework crystals to capture and hold water molecules when exposed to air flow at night. In the morning, air flow is cut and the water collected previous night is then vaporized by exposure to sunlight and then condensed into liquid water when it hits the cooler condenser.[11]