The causes of the foehn effect in the lee of mountains. Adapted from.[1] 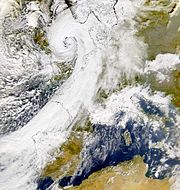 Föhn can be initiated when deep low-pressure systems move into Europe, drawing moist Mediterranean air over the Alps.

It is a rain shadow wind that results from the subsequent adiabatic warming of air that has dropped most of its moisture on windward slopes (see orographic lift). As a consequence of the different adiabatic lapse rates of moist and dry air, the air on the leeward slopes becomes warmer than equivalent elevations on the windward slopes. Föhn winds can raise temperatures by as much as 14 °C (25 °F)[4] in just a matter of hours. Switzerland, southern Germany and Austria have a warmer climate due to the Föhn, as moist winds off the Mediterranean Sea blow over the Alps.

The warm moist air from northern Italy is blocked on the windward side, loses much of its water vapour content, and descends on the French plateau and valley of the Mont-Cenis range in the Maurienne valley

There are four known causes of the foehn warming and drying effect.[1] These mechanisms often act together, with their contributions varying depending on the size and shape of the mountain barrier and on the meteorological conditions, such as the upstream wind speed, temperature and humidity.

When winds blow over elevated terrain, air forced upwards expands and cools due to the decrease in pressure with height. Since colder air can hold less water vapour, moisture condenses to form clouds and precipitates as rain or snow on the mountain's upwind slopes. The change of state from vapour to liquid water releases latent heat energy which heats the air, partially countering the cooling that occurs as the air rises. The subsequent removal of moisture as precipitation renders this heat gain by the air irreversible, leading to the warm, dry, foehn conditions as the air descends in the mountain's lee. This mechanism has become a popular textbook example of atmospheric thermodynamics. However, the common occurrence of 'dry' foehn events, where there is no precipitation, implies there must be other mechanisms.

Rotor cloud revealing overturning and turbulence above the lee slopes of the Antarctic Peninsula during a westerly foehn event.

Isentropic draw-down is the draw-down of warmer, drier air from aloft. When the approaching winds are insufficiently strong to propel the low-level air up and over the mountain barrier, the airflow is said to be 'blocked' by the mountain and only air higher up near mountain-top level is able to pass over and down the lee slopes as foehn winds. These higher source regions provide foehn air that becomes warmer and drier on the leeside after it is compressed with descent due to the increase in pressure towards the surface.

When river water passes over rocks, turbulence is generated in the form of rapids, and white water reveals the turbulent mixing of the water with the air above. Similarly, as air passes over mountains, turbulence occurs and the atmosphere is mixed in the vertical. This mixing generally leads to a downward warming and upward moistening of the cross-mountain airflow, and consequently to warmer, drier foehn winds in the valleys downwind.

Dry foehn conditions are responsible for the occurrence of rain shadows in the lee of mountains, where clear, sunny conditions prevail. This often leads to greater daytime radiative (solar) warming under foehn conditions. This type of warming is particularly important in cold regions where snow or ice melt is a concern or where avalanches are a risk.

Winds of this type are also called "snow-eaters" for their ability to make snow and ice melt or sublimate rapidly. This is a result not only of the warmth of foehn air, but also its low relative humidity. Accordingly, foehn winds are known to contribute to the disintegration of ice shelves in the polar regions.[5]

Foehn winds are notorious among mountaineers in the Alps, especially those climbing the Eiger, for whom the winds add further difficulty in ascending an already difficult peak.

They are also associated with the rapid spread of wildfires, making some regions which experience these winds particularly fire-prone.

Anecdotally, residents in areas of frequent foehn winds have reported experiencing a variety of illnesses ranging from migraines to psychosis. The first clinical review of these effects was published by the Austrian physician Anton Czermak in the 19th century.[6] A study by the Ludwig-Maximilians-Universität München found that suicide and accidents increased by 10 percent during foehn winds in Central Europe.[citation needed] The causation of Föhnkrankheit (English: Foehn-sickness) is unproven. Labels for preparations of aspirin combined with caffeine, codeine and the like will sometimes include Föhnkrankheit amongst the indications.[citation needed][7] Evidence for effects from Chinook winds remain anecdotal.

In some regions, föhn winds are associated with causing circulatory problems, headaches, or similar ailments.[8] Researchers have found, however, the foehn wind's warm temperature to be beneficial to humans in most situations, and have theorised that the reported negative effects may be a result of secondary factors, such as changes in the electrical field or in the ion state of the atmosphere, the wind's relatively low humidity, or the generally unpleasant sensation of being in an environment with strong and gusty winds.[8]

The name Foehn (German: Föhn, pronounced [ˈføːn]) arose in the Alpine region. Originating from Latin (ventus) favonius, a mild west wind of which Favonius was the Roman personification[9] and probably transmitted by Romansh: favuogn or just fuogn, the term was adopted as Old High German: phōnno. In the Southern Alps, the phenomenon is known as föhn but also Italian: favonio and fen in Serbo-Croatian and Slovene. The German word Föhn (pronounced the same way) also means "hairdryer", while the word Fön is a genericized trademark today owned by AEG.[10] The form phon is used in French-speaking parts of Switzerland as well as in Italy.

Regionally, these winds are known by many different names. These include: