Flekkefjord is the westernmost municipality of the geographical region of Sørlandet. Flekkefjord is approximately midway between the cities of Kristiansand and Stavanger, located along European route E39 and the Sørlandet Line.[3]

The coat-of-arms for Flekkefjord are rather old (compared with most Norwegian municipal arms). They were granted around the year 1855. The arms were originally proposed in 1855 and they were described as a pilot boat on the sea. The original proposal showed a boat on a very natural sea, all in natural colours. The present shape of the boat and the more heraldically correct arms date from 1899.[7]

The Church of Norway has four parishes (sokn) within the municipality of Flekkefjord. It is part of the Lister deanery in the Diocese of Agder og Telemark.

The town of Flekkefjord is located near the southern coast of the municipality in a fjord. It straddles the narrow sound which connects the Flekkefjorden to Grisefjorden. The port is ideal due to the tiny difference in tides experienced here. This is a result of its close proximity to the amphidromic point outside Eigersund.[8]

View of the town of Flekkefjord 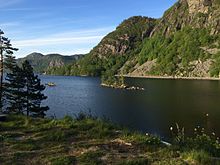 View of the lake Selura

View of the Bakke Church in Sira

The town of Flekkefjord

Flekkefjord was a landing place from early times. It was mentioned as a town as early as 1580. In 1589, James VI of Scotland landed there before travelling overland via Tønsberg to Oslo, where he married Princess Anne of Denmark, daughter of Frederick II.[10] When Kristiansand was founded in 1641, Christian IV wanted to assure the economic survival of his new city by moving Flekkefjord residents there. Twice it was sentenced to extinction by royal decree. But many of the Flekkefjord inhabitants remained and continued to trade.

Norway's plentiful stone was a Flekkefjord commodity. In 1736 over 300 Dutch ships are reported to have carried paving stones from Flekkefjord. By 1750 the herring fishery began in earnest, such that herring and timber dominated the trade. In the 1750s Flekkefjord was the most important Norwegian herring export harbor.

In 1760 Flekkefjord petitioned Frederik V to grant a town charter. At that time several ships were home ported there and both sailors and herring fishermen had their homes in this small town that was not officially recognized. Barrel making (cooperage) was also an important local trade that served the fishing fleet.

During the Napoleonic Wars Flekkefjord found a new life as a smugglers port, exporting oak to the Napoleon-occupied Netherlands during the period prior to 1807. The unusual tidal condition, the local timber abundance, and a long-term relationship with the Dutch were the reasons behind Flekkefjord's then serving as a smuggler's headquarters. They specialized in the lucrative oak trade, the warship timber in those days. Ships could come and leave Flekkefjord at any hour of the day, without concern for the tides.

Prior to 1807, Denmark-Norway had followed a policy of armed neutrality, using its naval forces only to protect trade flowing within, into, and out of Danish and Norwegian waters. But this changed for the last phase of the Napoleonic Wars when, in the Battle of Copenhagen in 1807, the British preemptively captured large portions of the Danish naval fleet to prevent the French from doing the same. As a result, the Danish government declared war and built small gunboats in large numbers to attack the British. The Gunboat War (1807–1814) was the title given to naval conflict between Denmark-Norway against the British navy. It was natural for Flekkefjord to move from a smuggler's haven to blockade runner's headquarters. The unusual tides there were unknown to the British warships that were blockading the Norwegian coast against Napoleon-supporting ships and this provided the blockade runners a considerable advantage.

After the war the Dutch maintained a strong presence in Flekkefjord, and continued exporting oak and pine. The pine was used mainly to make foundations for the boom in Amsterdam house construction; as a result most of Amsterdam’s houses from the 19th century are constructed of pines from Flekkefjord exporters. A section of Flekkefjord called ‘Hollenderbyen’ (town of the Dutch) dates from the 18th century.[8]

Xenotime, a rare yttrium phosphate mineral whose chemical formula is YPO4, was discovered in 1832 at Hidra (Hitterø), Flekkefjord.

The herring fisheries deserted the coast in 1838, depriving Flekkefjord residents of their main export. Tanning replaced fishing and by 1866 five tanneries were operating in Flekkefjord.

Flekkefjord and nearby areas are served by Sørlandet Hospital Flekkefjord that covers population needs for surgery, orthopedics, oncology, gynecology and obstetrics.

View of the landscape of Flekkefjord

All municipalities in Norway, including Flekkefjord, are responsible for primary education (through 10th grade), outpatient health services, senior citizen services, unemployment and other social services, zoning, economic development, and municipal roads. The municipality is governed by a municipal council of elected representatives, which in turn elect a mayor.

The municipal council (Kommunestyre) of Flekkefjord is made up of 35 representatives that are elected to four year terms. Currently, the party breakdown is as follows:[11]

After Flekkefjord acquired market town status in 1842, it also became a constituency for elections to the Parliament of Norway. The first representative was elected in 1845: Gerhard Heiberg Garmann. He served for three years before Nils Elias Børresen was elected. He served until 1863, when deputy Johan Andreas Kraft took over for one year. Knud Geelmuyden Fleischer Maartmann served from 1865 to 1866 and 1868 to 1869, and Elias Didrichsen served from 1871 to 1888, interrupted by Thorvald Olsen who served from 1877 through 1879. Niels Eyde, Jakob Stang, Sivert Hanssen-Sunde and Hans Sivert Jacobsen served one three-year term each between 1889 and 1900. Then, Cornelius Bernhard Hanssen served from 1900 to 1921, interrupted by Bernhard Severin Sannerud in the years 1916 through 1918. A law change in 1919 repelled Flekkefjord as a constituency of its own; from then it was a part of the combined constituency Market towns of Vest-Agder and Rogaland counties.[12]

Flekkefjord has twin town agreements with the following places:[13]