Flag of the governor general of Canada

List of Canadian flags Flag of Canada Arms of Canada

The first governor general's flag was adopted in 1870 and followed the design of other viceregal flags in use throughout the British Empire at the time: a Union Flag defaced with the shield of the coat of arms of Canada; though, in contrast to other imperial governors, the wreath surrounding the central badge was one of maple instead of laurel leaves. The design was updated in 1921, to incorporate changes to the appearance of Canada's coat of arms, and again in 1931, to reflect developments in Canada's constitutional structure brought about by the Statute of Westminster, whereby the governor general became the personal representative of the monarch of Canada, rather than a representative of the British monarch in Canada, as it was previously.

The current flag was first introduced in 1981 and comprises the crest of the royal coat of arms of Canada—a crowned lion holding a red maple leaf in its paw, standing on a wreath of red and white (Canada's official colours)—on a blue background. This design differs from that of the flags of governors-general in the other Commonwealth realms; most feature the royal crest of the arms of the United Kingdom above a scroll bearing the relevant country's name; the flag of the Governor-General of New Zealand displays the crowned shield of the coat of arms of New Zealand on a blue field.

While Roméo LeBlanc served as governor general (1995-1999), the flag was, at LeBlanc's direction, modified: the lion's tongue and claws were removed, which made the animal appear, in LeBlanc's opinion, more "Canadian".[1] These changes were reversed in 2002. 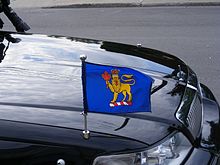 The flag affixed to the governor general's official car in 2007

The flag is protected under the Trade-marks Act; Section 9(c) states:

No person shall adopt in connection with a business, as a trade-mark or otherwise, any mark consisting of, or so nearly resembling as to be likely to be mistaken for ... the standard, arms or crest of His Excellency the Governor General[2]