A 1:2 Fleurdelisé flying in Downtown Montreal

The flag of Quebec, called the Fleurdelisé (the Lily-flowered) represents the Canadian province of Quebec. It consists of a white cross on a blue background, with four white fleurs-de-lis.[1]

It was adopted by the government of Quebec during the administration of Maurice Duplessis (March 9, 1950). It was the first provincial flag officially adopted in Canada, first shown on January 21, 1948, at the Parliament Building of the National Assembly in Quebec City. Quebec's Flag Day (January 21) commemorates its adoption each year, though for some time it was celebrated in May.[2] At least one parade marked the flag's 60th anniversary in January 2008.[3]

Article 2 of An Act respecting the flag and emblems of Québec confers the status of national emblem (French: emblème national) to the flag of Québec.[4][5]

Naval Flag of the Kingdom of France

The Fleurdelisé takes its white cross from the royal flags of the Kingdom of France, namely the French naval flag as well as the French merchant flag.

Its white fleurs-de-lis (symbolizing purity) and blue field (symbolizing Heaven) come from a banner honouring the Virgin Mary. One such was reputedly carried by French Canadian militia at General Louis-Joseph de Montcalm's victory at Carillon.

The flag is blazoned Azure, a cross between four fleurs-de-lis argent. Its horizontal symmetry allows both sides of the flag to show the same image.

The flag's official ratio is 2:3 (width to length), but the flag is very often seen as a 1:2 variant to match the flag of Canada in size when flying together.

The Act concerning the flag and emblems of Quebec states that "in all cases, the flag of Quebec has precedence over any other flag or emblem."[6] However, under federal protocol, the Canadian flag takes precedence when both are flown.[7]

The canton (canton d'honneur; top left quarter) must always be to the viewer's left.[10] 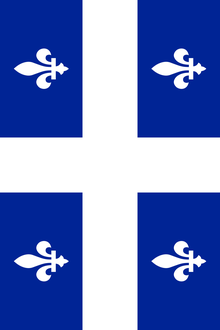 The green, white and red tricolour used by the Parti patriote between 1832 and 1838

The desire of French Canadians in Quebec for a distinctive flag was longstanding. Other flags that had been used included the Parti Patriote flag, a horizontal green, white, and red tricolour, which became the flag of the Saint-Jean-Baptiste Society; as well as the French tricolour.

The direct predecessor of the modern Fleurdelisé was created by Elphège Filiatrault, a parish priest in Saint-Jude, Quebec. Called the Carillon, it resembled the modern flag except that the fleurs-de-lis were at the corners pointing inward. It was based on an earlier flag with no cross and with the figure of the Virgin Mary in the centre.

The Carillon flag was first raised on September 26, 1902, and is preserved in the Saint-Hyacinthe, Quebec archives. Another version, with the Sacred Heart in the centre, also appeared, but was left behind in the push for a new provincial flag after World War II. The Carillon flags were used informally.

On May 26, 1868, Queen Victoria approved Quebec's first coat of arms. A flag might have been devised by using the arms to deface a blue ensign (a Union Flag in the canton, and the Quebec coat of arms in the fly). However, it appears to have never been used — various sources including the official Quebec government site[11] mention that it was the Union Flag that flew over the Parliament Building until January 21, 1948, not the blue ensign. In addition, in 1938, at the opening of a mining school in Val-d'Or, the flag used to represent the Quebec government was a banner of arms. This was done at the behest of public servant Burroughs Pelletier,[12] who had been told that the Ministry wanted a symbol but were unsure as to what should be used.

The Carillon-Sacré-Coeur: flag waved by French Canadian Roman Catholics until the 1950s.

The original Carillon flag, proposed in 1902 as Quebec's new flag. It was flown at the Parliament Building from 21 January 1948 until the new Fleurdelisé was ready on 2 February 1948.

Proposals prepared by Burroughs Pelletier.
Former flags for Quebec and previous proposals for a new one

In 1947, an independent member of the Legislative Assembly, René Chaloult, demanded a new provincial flag to displace the unpopular (amongst some segment of the population of Quebec) Canadian Red Ensign and to replace the neglected Quebec blue ensign. Various ideas were discussed between Chaloult, Lionel Groulx, and Maurice Duplessis. One such idea involved incorporating a red maple leaf (later to be adopted for the flag of Canada). Burroughs Pelletier was also asked to present a few proposals to Duplessis, none of which were adopted. He was however consulted about what became the present design.

On January 21, 1948, the new flag was adopted and was flown over the Parliament Building that very afternoon. Apparently, it was the Carillon flag that flew that day, because the modern Fleurdelisé (with the fleurs-de-lis repositioned upright to their modern configuration in correspondence with the rules of heraldry) was not available until February 2.[13]

The flag was adopted by Royal Proclamation, and the news was presented to the Legislative Assembly more or less as a fait accompli. Opposition leader Adélard Godbout expressed his approval, as did René Chaloult. A law governing the usage of the flag was later officially adopted by the Quebec Parliament on March 9, 1950. A more recent version of such a law was adopted in 2002.

A 2001 survey by the North American Vexillological Association ranked the Fleurdelisé as the best provincial or territorial flag, and the third-best of the flags of all U.S. and Canadian provinces, territories, and states.[14] Likewise, the flag is highly popular in Quebec, and is often seen displayed at many private residences and commercial buildings.

The flag of Quebec was the basis for the jerseys of the Quebec Nordiques, which included the same colour blue, the fleurs-de-lis, and white stripes.