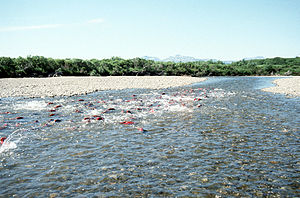 Salmon spawn in a salmon fishery within the Becharof Wilderness in Southwest Alaska.

% of fisheries exploited over time

Generally a fishery is an entity engaged in raising or harvesting fish which is determined by some authority to be a fishery.[1] According to the FAO, "...a fishery is an activity leading to harvesting of fish. It may involve capture of wild fish or raising of fish through aquaculture." It is typically defined in terms of the "people involved, species or type of fish, area of water or seabed, method of fishing, class of boats, purpose of the activities or a combination of the foregoing features".[2] The definition often includes a combination of fish and fishers in a region, the latter fishing for similar species with similar gear types.[3][4] Some government and private organizations, especially those focusing on recreational fishing include in their definitions not only the fishers, but the fish and habitats upon which the fish depend.

Directly or indirectly, the livelihood of over 500 million people in developing countries depends on fisheries and aquaculture. Overfishing, including the taking of fish beyond sustainable levels, is reducing fish stocks and employment in many world regions.[5][6] A report by Prince Charles' International Sustainability Unit, the New York-based Environmental Defence Fund and 50in10 published in July 2014 estimated global fisheries were adding US$270 billion a year to global GDP, but by full implementation of sustainable fishing, that figure could rise by as much as US$50 billion.[7] In additional to commercial and subsistence fishing, recreational (sport) fishing is popular and economically important in many regions.[8]

Fisheries are harvested for their value (commercial, recreational or subsistence). They can be saltwater or freshwater, wild or farmed. Examples are the salmon fishery of Alaska, the cod fishery off the Lofoten islands, the tuna fishery of the Eastern Pacific, or the shrimp farm fisheries in China. Capture fisheries can be broadly classified as industrial scale, small-scale or artisanal, and recreational.

Close to 90% of the world's fishery catches come from oceans and seas, as opposed to inland waters. These marine catches have remained relatively stable since the mid-nineties (between 80 and 86 million tonnes).[11] Most marine fisheries are based near the coast. This is not only because harvesting from relatively shallow waters is easier than in the open ocean, but also because fish are much more abundant near the coastal shelf, due to the abundance of nutrients available there from coastal upwelling and land runoff. However, productive wild fisheries also exist in open oceans, particularly by seamounts, and inland in lakes and rivers.

Most fisheries are wild fisheries, but farmed fisheries are increasing. Farming can occur in coastal areas, such as with oyster farms,[12] or the aquaculture of salmon, but more typically fish farming occurs inland, in lakes, ponds, tanks and other enclosures.

There are commercial fisheries worldwide for finfish, mollusks, crustaceans and echinoderms, and by extension, aquatic plants such as kelp. However, a very small number of species support the majority of the world's fisheries. Some of these species are herring, cod, anchovy, tuna, flounder, mullet, squid, shrimp, salmon, crab, lobster, oyster and scallops. All except these last four provided a worldwide catch of well over a million tonnes in 1999, with herring and sardines together providing a harvest of over 22 million metric tons in 1999. Many other species are harvested in smaller numbers.

Total fish production in 2016 reached an all-time high of 171 million tonnes, of which 88 percent was utilized for direct human consumption, thanks to relatively stable capture fisheries production, reduced wastage and continued aquaculture growth. This production resulted in a record-high per capita consumption of 20.3 kg in 2016.[13] Since 1961 the annual global growth in fish consumption has been twice as high as population growth. While annual growth of aquaculture has declined in recent years, significant double-digit growth is still recorded in some countries, particularly in Africa and Asia.[13]

FAO predicts the following major trends for the period up to 2030:

Among the many challenges in fisheries management is the difficulty of reducing the percentage of fish stocks fished beyond biological sustainability.[13]

This article incorporates text from a free content work. Licensed under CC BY-SA 3.0 IGO License statement/permission on Wikimedia Commons. Text taken from In brief, The State of World Fisheries and Aquaculture, 2018, FAO, FAO. To learn how to add open license text to Wikipedia articles, please see this how-to page. For information on reusing text from Wikipedia, please see the terms of use.