A fire whirl, also commonly known as a fire devil or fire tornado, is a whirlwind induced by a fire and often (at least partially) composed of flame or ash. These start with a whirl of wind, often made visible by smoke, and may occur when intense rising heat and turbulent wind conditions combine to form whirling eddies of air. These eddies can contract a tornado-like vortex that sucks in debris and combustible gases.

The phenomenon is sometimes mislabeled a fire tornado, firenado, fire swirl, or fire twister, but these are a separate phenomenon where a fire has such intensity that it generates an actual tornado. (This phenomenon was first verified in the 2003 Canberra bushfires and has since been verified in the 2018 Carr Fire in California and 2020 Loyalton Fire in California and Nevada.) Fire whirls are not usually classifiable as tornadoes as the vortex in most cases does not extend from the surface to cloud base. Also, even in such cases, those fire whirls very rarely are classic tornadoes, as their vorticity derives from surface winds and heat-induced lifting, rather than from a tornadic mesocyclone aloft. [1]

A fire whirl consists of a burning core and a rotating pocket of air. A fire whirl can reach up to 2,000 °F (1,090 °C).[2] Fire whirls become frequent when a wildfire, or especially firestorm, creates its own wind, which can spawn large vortices. Even bonfires often have whirls on a smaller scale and tiny fire whirls have been generated by very small fires in laboratories.[3]

Fire whirls can uproot trees that are 15 m (49 ft) tall or more.[6] These can also aid the 'spotting' ability of wildfires to propagate and start new fires as they lift burning materials such as tree bark. These burning embers can be blown away from the fire-ground by the stronger winds aloft.

Fire whirls can be common within the vicinity of a plume during a volcanic eruption.[7][8] These range from small to large and form from a variety of mechanisms, including those akin to typical firewhirl processes, but can result in Cumulonimbus flammagenitus (cloud) spawning landspouts and waterspouts[9] or even to develop mesocyclone-like updraft rotation of the plume itself and/or of the cumulonimbi, which can spawn tornadoes similar to those in supercells.[10] Pyrocumulonimbi generated by large fires on rare occasion also develops in a similar way.[11][1][12][13]

There are currently three widely recognized types of fire whirls:[14]

There is evidence suggesting that the fire whirl in the Hifukusho-ato area, during the 1923 Great Kantō earthquake, was of type 3.[15] Other mechanism and firewhirl dynamics may exist.[16] A broader classification of fire whirls suggested by Forman A. Williams includes five different categories:[17] 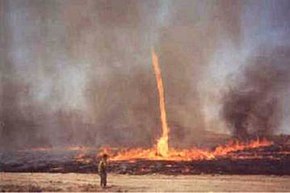 During the 1871 Peshtigo fire, the community of Williamsonville, Wisconsin was burned by a fire whirl; the area where Williamsonville once stood is now Tornado Memorial County Park.[18][19][20]

An extreme example of a fire whirl is the 1923 Great Kantō earthquake in Japan, which ignited a large city-sized firestorm and produced a gigantic fire whirl that killed 38,000 people in fifteen minutes in the Hifukusho-Ato region of Tokyo.[21]

Another example is the numerous large fire whirls (some tornadic) that developed after lightning struck an oil storage facility near San Luis Obispo, California, on 7 April 1926, several of which produced significant structural damage well away from the fire, killing two. Many whirlwinds were produced by the four-day-long firestorm coincident with conditions that produced severe thunderstorms, in which the larger fire whirls carried debris 5 km (3.1 mi) away.[22]

Firewhirls were produced in the conflagrations and firestorms triggered by firebombings of European and Japanese cities during World War Two and by the atomic bombings of Hiroshima and Nagasaki. Firewhirls associated with the bombing of Hamburg, particularly those of 27–28 July 1943, were studied.[23]

Throughout the 1960s-1970s, particularly in 1978-1979, firewhirls ranging from the transient and very small to intense, long-lived tornadic-like vortices capable of causing significant damage were spawned by fires generated from the 1000 MW Météotron, a series of large oil wells located in the Lannemezan plain of France used for testing atmospheric motions and thermodynamics.[24]

During the 2003 Canberra bushfires in Canberra, Australia a violent firewhirl was documented. It was calculated to have horizontal winds of 160 mph (260 km/h) and vertical air speed of 93 mph (150 km/h), causing the flashover of 300 acres (120 ha) in 0.04 seconds.[25] It was the first known firewhirl in Australia to have EF3 wind speeds on the Enhanced Fujita scale.[26]

A fire whirl, of reportedly uncommon size for New Zealand wildfires, formed on day three of the 2017 Port Hills fires in Christchurch. Pilots estimated the fire column to be 100 m (330 ft) high.[27]

Residents in the city of Redding, California, while evacuating the area from the massive Carr Fire in late July 2018, reported seeing pyrocumulonimbus clouds and tornado-like behaviour from the firestorm, resulting in uprooted trees, cars, structures and other wind related damages in addition to the fire itself. As of August 2, 2018, a preliminary damage survey, led by the National Weather Service (NWS) in Sacramento, California, rated the July 26th fire whirl as an EF3 tornado with winds in excess of 143 mph (230 km/h).[28]

On August 15, 2020, for the first time in its history, the U.S. National Weather Service issued a tornado warning for a pyrocumulonimbus created by a wildfire near Loyalton, California capable of producing a fire tornado.[29][30][31]

In controlled small-scale experiments, fire whirls are found to transition to a new mode of combustion called blue whirls [32]. The name blue whirl was coined because the soot production is negligible in blue whirl leading to the disappearance of the typical yellow color of the fire whirl. Blue whirls are lifted, partially premixed flames that sit in the recirculation region of the vortex-breakdown bubble.[33] The flame length and burning rate of the blue whirl are smaller than the fire whirl.[34]