Citizenship of Finland can be obtained on the basis of birth, marriage of parents, adoption, or the place of birth. In addition, it may be acquired by application or by declaration to authorities. Finnish citizenship acquisition is based primarily on the legal principle of jus sanguinis. However, for many practical purposes, the concepts of municipal domicile and domicile in Finland are as important to the relation between the individual and the Finnish authorities as the individual's citizenship status.

A child acquires jus sanguinis Finnish citizenship at birth if:[1]

If the adoption decision was made prior to 1 June 2003, an adopted child under 12 years of age may apply for Finnish citizenship by declaration. Application must be made on or before 31 May 2008.

An adopted child who is over 12 years old may apply for Finnish citizenship by declaration.

Naturalisation as a Finnish citizen 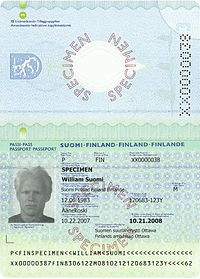 A specimen of the Finnish passport

Finnish citizenship can be acquired by application or declaration:

A foreigner may be granted Finnish citizenship upon meeting certain requirements, including:

For those married to or in a registered partnership with a Finnish citizen for more than three years, the residence requirement is reduced to:

Former Finnish citizens and citizens of other Nordic countries are only required to have two years continuous residence in Finland.

The authorities have the right to refuse an application for citizenship by application even if the requirements are met.

Declaration is a simpler method of acquiring Finnish citizenship. If the legal requirements are met it must be granted.

Categories of persons eligible for citizenship by declaration include:

Persons aged between 18–23 may acquire Finnish citizenship by declaration if:

Residence in another Nordic country before the age of 16 counts as residence in Finland (up to a maximum of 5 years). For males in the age group 18–23 years, getting the citizenship means becoming liable for conscription.

Otherwise the requirements are:

People from the autonomous Finnish province of Åland, have provincial (Ålandic) right of domicile in addition to their national (Finnish) citizenship. The right of domicile is called hembygdsrätt (kotiseutuoikeus in Finnish) and it gives Ålanders the right to buy and own real estate, abstain from national service, vote for and be elected to the Lagting and set up a business on Åland. Ordinary Finns without a right of domicile have none of these rights in Åland.

Registration of the municipal domicile

As the main rule, the person is domiciled in their place of residence. A new-born is domiciled in the municipality of its mother. If a person has several residences, the place which he has closest ties to is their domicile. The ties may be related to work, family or other similar arrangements. The register authorities will determine the domicile of the person whose opinion cannot be resolved.[5]

A person who leaves the country to stay abroad for more than a year, loses municipal domicile immediately. However, exceptions are made for persons who retain close ties to Finland or work as diplomats, missionaries or aid workers.[6]

When moving, the person's domicile will not change if the move has been caused by[9]

Any person who is domiciled in Finland is obliged to inform the registry office on moving permanently or temporarily within seven days from the move. Also persons who move from a residence without having any new address are required to report the change.[10] Failure to report moves is punishable by 50 euro administrative fine.[11]

Although similarly worded, the definition used is not exactly the same as for the determination of municipal domicile. In particular, the municipal domicile alone does not make an alien or citizen domiciled in Finland. The domicile in Finland requires factual residence and home in Finland, as well as permanent and continued physical presence in the country. This applies to foreigners and citizens alike. Persons moving into Finland may be considered domiciled in Finland immediately if they actually intend to remain in the country. This means that not even a Finnish citizen moving into Finland is guaranteed the state social benefits immediately after entry, unless they can show that they intend to remain.[20]

On the other hand, the concept of "domicile in Finland" allows for more consideration than the mechanistic definition municipal domicile. Students, missionaries, scholars, scientists, aid workers, officials of international organizations and employees of Finnish companies, as well as their family members may retain their domicile in Finland indefinitely even if they lose their municipal domicile. However, the Kela, which determines the domicile status, has a wide leeway to judge the circumstances of individuals.[21]

A foreigner with both municipal domicile and a domicile in Finland enjoys all social and health services provided to Finnish citizens.

Persons with close ties include those:

Finnish citizens may also lose citizenship if they formally petition for permission to renounce it. To prevent statelessness, Finnish citizenship may be renounced only if the person proves that they are a citizen of another state.

While losing Finnish citizenship is rare, the benefits of citizenship for persons residing abroad without close ties to Finland are few. A citizen without domicile in Finland and without municipal domicile has no rights to Finnish social security, to Finnish consular help in personal emergencies,[22] or to Finnish health services. The most important remaining rights are the absolute right to return to Finland, to vote in national elections, to have a Finnish passport, to work in the European Union without the working visa requirements faced by non-European Union citizens, and to enroll in Scandinavian universities as a European Union citizen (waiving university fees). In addition, all Finnish citizens have the right to receive consular protection from Finnish foreign missions in case of a major crisis in the host country or in case of arrest or incarceration.[23] However, if a Finnish citizen is also a citizen of the host country, Finnish foreign missions will not act on his behalf.[24]

As of July 2005, over 5000 people had acquired or resumed Finnish citizenship under this new provision.[25]

The changes to the law also mean that foreigners seeking naturalisation as a Finnish citizen do not need to renounce their former citizenship. They may retain it if the law of the other country permits them to do so.

Effective 1 May 2019, individuals with dual citizenship can be deprived of their citizenship should they be sentenced for serious crimes which can lead to eight years prison. Given examples of such were terrorism, treason, hostage taking, people smuggling, inciting to war and espionage. The decision on whether to cancel the Finnish citizenship will be taken by the Finnish Immigration Service. The law is not retroactive and therefore does not encompass people with Finnish citizenship who have joined the Islamic State of Iraq and the Levant.[26]

Citizenship of the European Union

Visa requirements for Finnish citizens are administrative entry restrictions by the authorities of other states placed on citizens of Finland. In 2020, Finnish citizens had visa-free or visa-on-arrival access to 188 countries and territories, ranking the Finnish passport fourth in the world according to the Visa Restrictions Index.[31]

The Finnish nationality is ranked eighth in The Quality of Nationality Index (QNI). This index differs from the Visa Restrictions Index, which focuses on external factors including travel freedom. The QNI considers, in addition, to travel freedom on internal factors such as peace & stability, economic strength, and human development as well.[32]