Finnish Lakeland or Finnish lake district (Finnish: Järvi-Suomi, "Lake Finland", Swedish: Insjöfinland) is the largest of the four landscape regions into which the geography of Finland is divided.

The hilly, forest-covered landscape of the lake plateau is dominated by drumlins and by long sinuous eskers. Both are glacial remnants after the continental glaciers that scoured and gouged the country's surface receded about 10,000 years ago.

The lake basins of the lakeland originate from the joint work of weathering and erosion of fractures in the bedrock. The erosion that made the depressions occurred before and during the Quaternary ice ages.[1] Erosion along fractures has produced linear inlets among the lakes.[2]

The district occupies most of the central and East Finland and is bounded to the south by the Salpausselkä Ridges. These ridges are terminal moraines, which trap networks of thousands of lakes separated by hilly forested countryside.

The lake district turns into the Coastal Finland district to the West and Northwest, and is bounded by the Upland Finland to the North.

The lake landscape continues to the East and extends into Russia (Karelian Isthmus and Republic of Karelia). 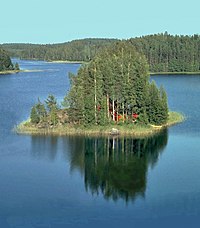 A summer cottage ("mökki") on a lake island.

Lakes occupy about 25% of the Lakeland. Much of the territory is forested and has a low population density. The cities in the region are Lappeenranta, Imatra, Jyväskylä, Mikkeli, Pieksämäki, Varkaus, Joensuu, Savonlinna and Kuopio. Since lakes formed the main transport route in earlier times, urban areas are often located on lakeshore, occasionally even on isthmuses or peninsulas, e.g. Varkaus, Savonlinna and Kuopio. The lakes often have extremely convoluted coastlines and consists of several nearly separate stretches of open water (selkä) connected by narrow sounds. Thus, they can connect large areas along shores and their hinterlands.

Because no set definition of what constitutes a lake and no procedures for counting the number of lakes exist, it has been impossible to ascertain exactly how many lakes the region has. There are, however, at least 55,000 lakes that are at least 200 metres wide.

If lake is defined to be a body of standing water larger than 500 square metres, then there are 187,888 lakes in Finland. On average, there are 40 lakes per 100 square kilometres in the district. The lake number density is largest north of the Lake Inari, up to 1,000 per 100 square kilometres, so that the area is sometimes called Lampi-Suomi (Pond Finland, Finnish pond district).[3]

The largest is Lake Saimaa, which, with a surface area of more than 4,400 square kilometres, is the fourth largest natural freshwater lake in Europe. Lake Saimaa itself contains 5,484 islands,[4] and islands in the greater Saimaa region (Finnish: Suur-Saimaa) number up to 13,710.[5] The deepest lake, Päijänne, has a maximum depth of only 95.3 metres; the depth of the average lake is 7 metres. Because they are shallow, these many lakes contain only slightly more water than Finland's annual rainfall.

Lake Päijänne is the second largest lake in Finland, which drains into the Gulf of Finland via the Kymi River and which is used as a drinking water supply for Helsinki.