Finnish Canadians are Canadian citizens of Finnish ancestry or Finns who emigrated to and reside in Canada. According to the 2001 census number over 131,040 Canadians claim Finnish ancestry. Finns started coming to Canada in the early 1880s, and in much larger numbers in the early 20th century and well into the mid-20th century. Finnish immigration to Canada was often a direct result of economic depressions and wars, or in the aftermath of major conflicts like the Finnish Civil War.[2][3] Canada was often chosen as a final destination because of the similarity in climate and natural conditions, while employment in logging or homesteading attracted landless farmers in the early 20th century.[4] Migratory movements of Finns between Canada and the United States was very common as well.[5]

The earliest Finnish immigrants to Canada came from the US, possibly as early as the 1820s for the construction of the Welland Canal. The Canadian Pacific Railway recruited immigrants directly from Finland in the late 1800s.[9]

Canadians of Finnish ancestry often formed a large percentage of left-wing organizations during the early 1900s, as Finland had, by 1906 as a part of the Russian empire, already become one of the first nations to adopt universal suffrage. Up until the early 1940s, the so-called "Red Finns," who held deep socialist convictions, far outnumbered "White Finns," the more religious and conservative Finns. This was partially due to the number of political refugees escaping persecution after the Finnish Civil War, but also attributable to the response of several, formerly apolitical Finns from rural Ostrobothnia, to harsh economic conditions. Finnish Canadians with Marxist political views aligned themselves with the Social Democratic Party of Canada and later, with the Communist Party of Canada, centered around the newspaper Vapaus (Freedom). Many Finns, however, were distrustful of politicians as a result of the perceived failure and reformism of the Finnish Social Democratic Party during the general strike in November 1917 and the reformist policy the party adopted after the Civil War. Finns arriving in Canada who had already faced severe class conflict and repression would line-up with the radical union, the Industrial Workers of the World (IWW) emphasizing anti-authoritarianism and anti-statism. The IWW would hold considerable influence in the mines and logging camps of Northern Ontario.

A decline in the Finnish-Canadian population began with the exodus 2000-3000[10] skilled workers and loggers to Soviet Karelia in the 1920s and 30s, and the large number of Finnish-Canadian volunteers in the Spanish Civil War. Finnish-Canadians, along with Ukrainians, formed the largest section of volunteers in the Canadian contingent of the International Brigades, Mackenzie-Papineau Battalion. Finns formed the Mackenzie-Papineau Battalions "Ilkka" machine-gun company. The period after the 1930s marks a decline in Finnish co-operative activity in Canada.

Canada started seeing a drastic increase in immigration from Finland during the late 1920s and forward, as the United States Immigration Act of 1924 did not consider Finland to be among the Western European favourable countries to have immigration from, resulting in a strong restriction of 500 Finnish immigrants per year to the US.[11] Despite conservative "White" Finnish support for Nazi Germany during World War II, Canadian immigration policy in the 1940s favoured admitting "White Finns" to Canada. This, combined with a fiercely anti-socialist view in the post-World War II era, led to a shift in the political balance of the Finnish-Canadian community. 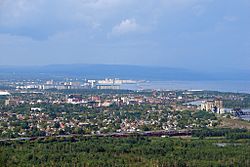 Thunder Bay, Ontario is home to 14,510 people of Finnish descent, the highest concentration of Finnish Canadians per capita in the country,[12] and the second largest Finnish population in Canada after Toronto which has 14,750 persons of Finnish origin.

Central Canada (mainly Ontario) has generally been the largest destination for Finns, followed by British Columbia, recording 72,990 (ON) and 29,875 (BC) Finns in 2006. Several small rural Finnish communities were established in Alberta and Saskatchewan.[13]

Today, the communities of Thunder Bay, Sudbury and New Finland form the main centres of Finnish-Canadian activity. Thunder Bay boasts the largest Finnish population outside of Fennoscandia, and the only Finnish cultural centre in Canada, housed in the Finnish Labour Temple along with the Hoito Restaurant. The Finnish-Canadian weeklies Canadan Sanomat and Vapaa Sana publish out of Thunder Bay and Toronto respectively. Another significant Finnish-Canadian newspaper, Vapaus, was published in Sudbury from 1917 to 1974. Other prominent communities are Sault Ste. Marie, Kirkland Lake and Timmins, in Ontario.

Finnish Canadians by province or territory

Finnish Canadian population by province and territory in Canada in 2011: