People born in the Philippines as a percentage of the population in Sydney divided geographically by postal area, as of the 2011 census

Currently Filipinos are the third largest Asian Australian immigrant group behind Indian Australians and Chinese Australians.[4] Females account for 61% while males represent 39% of Filipino Australians born in the Philippines.[4] According to census data, 50.2 per cent of the Philippines-born were resident in New South Wales, followed by 21.6% in Victoria, 14.9% in Queensland and 5.2% in Western Australia.

Filipinos were excluded from entering Australia under the White Australia policy. As a consequence, their numbers in Australia remained minimal; confined to descendants of those few Filipinos who had migrated to the north west pearling areas of Western Australia and the sugar cane plantations of Queensland prior to 1901; until the abolition of racially selective immigration policies in 1966.[5] The 1901 census had recorded 700 Filipinos in Australia.[5] 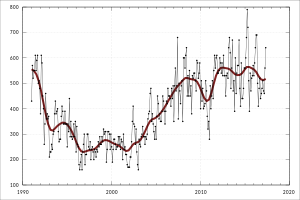 Martial law in the Philippines, declared by former Philippine president Ferdinand Marcos in 1972, and the renunciation of the White Australia policy made Australia an attractive destination for Filipino emigrants, particularly skilled workers. Many Filipinos also settled in Australia from the 1970s onward as either migrant workers or the spouses of Australian citizens. Marriages between Filipinos and Australians rose very sharply from 1978, peaked in 1986, and remained high as of 2000, despite a dip in the early 1990s.[6] The 1980s were the period of the greatest Filipino immigration, with 1987-1988 being the peak year.[5]