Enlarge Magnetic field ISBN (identifier)
Visual aid to depiction of a vector field
This article is about the modern use of "field lines" as a way to depict electromagnetic and other vector fields. For the role of these lines in the early history and philosophy of electromagnetism, see Line of force.

A field line is a graphical visual aid for visualizing vector fields. It consists of a directed line which is tangent to the field vector at each point along its length.[1][2] A diagram showing a representative set of neighboring field lines is a common way of depicting a vector field in scientific and mathematical literature; this is called a field line diagram. They are used to show electric fields, magnetic fields, and gravitational fields among many other types. In fluid mechanics field lines showing the velocity field of a fluid flow are called streamlines.

Since there are an infinite number of points, an infinite number of field lines can be drawn; but only a limited number can be shown on a field line diagram. Therefore which field lines are shown is a choice made by the person or computer program which draws the diagram, and a single vector field may be depicted by different sets of field lines. A field line diagram is necessarily an incomplete description of a vector field, since it gives no information about the field between the drawn field lines, and the choice of how many and which lines to show determines how much useful information the diagram gives.

In physics, drawings of field lines are mainly useful in cases where the sources and sinks, if any, have a physical meaning, as opposed to e.g. the case of a force field of a radial harmonic. For example, Gauss's law states that an electric field has sources at positive charges, sinks at negative charges, and neither elsewhere, so electric field lines start at positive charges and end at negative charges. A gravitational field has no sources, it has sinks at masses, and it has neither elsewhere, gravitational field lines come from infinity and end at masses. A magnetic field has no sources or sinks (Gauss's law for magnetism), so its field lines have no start or end: they can only form closed loops, extend to infinity in both directions, or continue indefinitely without ever crossing itself.

Note that for this kind of drawing, where the field-line density is intended to be proportional to the field magnitude, it is important to represent all three dimensions. For example, consider the electric field arising from a single, isolated point charge. The electric field lines in this case are straight lines that emanate from the charge uniformly in all directions in three-dimensional space. This means that their density is proportional to

, the correct result consistent with Coulomb's law for this case. However, if the electric field lines for this setup were just drawn on a two-dimensional plane, their two-dimensional density would be proportional to

, an incorrect result for this situation.[5] 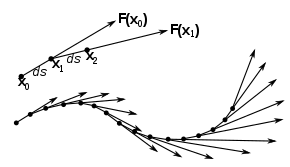 Construction of a field line

Given a vector field

and a starting point

. The unit tangent vector at that point is:

. By moving a short distance

Then the field at that point

is found and moving a further distance

in that direction the next point

of the field line is found. At each point

the next point can be found by

By repeating this and connecting the points, the field line can be extended as far as desired. This is only an approximation to the actual field line, since each straight segment isn't actually tangent to the field along its length, just at its starting point. But by using a small enough value for

Different ways to depict the field of a magnet.

Field lines can be used to trace familiar quantities from vector calculus: 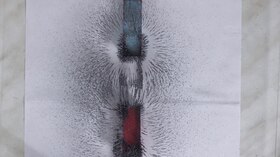 Play media
When randomly dropped (as with the shaker here), iron filings arrange themselves so as to approximately depict some magnetic field lines. The magnetic field is created by a permanent magnet underneath the glass surface.

While field lines are a "mere" mathematical construction, in some circumstances they take on physical significance. In fluid mechanics, the velocity field lines (streamlines) in steady flow represent the paths of particles of the fluid. In the context of plasma physics, electrons or ions that happen to be on the same field line interact strongly, while particles on different field lines in general do not interact. This is the same behavior that the particles of iron filings exhibit in a magnetic field.

The iron filings in the photo appear to be aligning themselves with discrete field lines, but the situation is more complex. It is easy to visualize as a two-stage-process: first, the filings are spread evenly over the magnetic field but all aligned in the direction of the field. Then, based on the scale and ferromagnetic properties of the filings they damp the field to either side, creating the apparent spaces between the lines that we see.[citation needed] Of course the two stages described here happen concurrently until an equilibrium is achieved. Because the intrinsic magnetism of the filings modifies the field, the lines shown by the filings are only an approximation of the field lines of the original magnetic field. Magnetic fields are continuous, and do not have discrete lines.