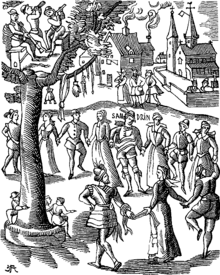 Village Feast. Facsimile of a woodcut of the Sandrin ou Verd Galant, facetious work end of 16th century (edition of 1609)

A festival is an event ordinarily celebrated by a community and centering on some characteristic aspect of that community and its religion or cultures. It is often marked as a local or national holiday, mela, or eid. A festival constitutes typical cases of glocalization, as well as the high culture-low culture interrelationship.[1] Next to religion and folklore, a significant origin is agricultural. Food is such a vital resource that many festivals are associated with harvest time. Religious commemoration and thanksgiving for good harvests are blended in events that take place in autumn, such as Halloween in the northern hemisphere and Easter in the southern.

Festivals often serve to fulfill specific communal purposes, especially in regard to commemoration or thanking to the gods and goddesses. Celebrations offer a sense of belonging for religious, social, or geographical groups, contributing to group cohesiveness. They may also provide entertainment, which was particularly important to local communities before the advent of mass-produced entertainment. Festivals that focus on cultural or ethnic topics also seek to inform community members of their traditions; the involvement of elders sharing stories and experience provides a means for unity among families.

In Ancient Greece and Rome, festivals such as the Saturnalia were closely associated with social organisation and political processes as well as religion.[2][3][4] In modern times, festivals may be attended by strangers such as tourists, who are attracted to some of the more eccentric or historical ones. The Philippines is one example of a modern society with many festivals, as each day of the year has at least one specific celebration. There are more than 42,000 known major and minor festivals in the country, most of which are specific to the barangay (village) level.[5] 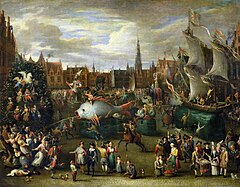 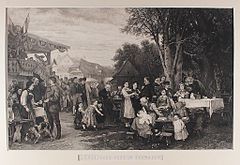 The word "festival" was originally used as an adjective from the late fourteenth century, deriving from Latin via Old French.[6] In Middle English, a "festival dai" was a religious holiday.[7] Its first recorded used as a noun was in 1589 (as "Festifall").[6] Feast first came into usage as a noun circa 1200,[8] and its first recorded use as a verb was circa 1300.[9] The term "feast" is also used in common secular parlance as a synonym for any large or elaborate meal. When used as in the meaning of a festival, most often refers to a religious festival rather than a film or art festival. In the Philippines and many other former Spanish colonies, the Spanish word fiesta is used to denote a communal religious feast to honor a patron saint.[citation needed]

The word gala comes from Arabic word khil'a, meaning robe of honor.[10] The word gala was initially used to describe "festive dress", but came to be a synonym of festival starting in the 18th century.[11]

Many festivals have religious origins and entwine cultural and religious significance in traditional activities. The most important religious festivals such as Christmas, Rosh Hashanah, Diwali, Eid al-Fitr and Eid al-Adha serve to mark out the year. Others, such as harvest festivals, celebrate seasonal change. Events of historical significance, such as important military victories or other nation-building events also provide the impetus for a festival. An early example is the festival established by Ancient Egyptian Pharaoh Ramesses III celebrating his victory over the Libyans.[12] In many countries, royal holidays commemorate dynastic events just as agricultural holidays are about harvests. Festivals are often commemorated annually.

There are numerous types of festivals in the world and most countries celebrate important events or traditions with traditional cultural events and activities. Most culminate in the consumption of specially prepared food (showing the connection to "feasting") and they bring people together. Festivals are also strongly associated with national holidays. Lists of national festivals are published to make participation easier.[13]

Among many religions, a feast is a set of celebrations in honour of Gods or God.[14] A feast and a festival are historically interchangeable. Most religions have festivals that recur annually and some, such as Passover, Easter and Eid al-Adha are moveable feasts – that is, those that are determined either by lunar or agricultural cycles or the calendar in use at the time. The Sed festival, for example, celebrated the thirtieth year of an Egyptian pharaoh's rule and then every three (or four in one case) years after that.[15] Among the Ashantis, most of their traditional festivals are linked to gazette sites which are believed to be sacred with several rich biological resources in their pristine forms. Thus, the annual commemoration of the festivals helps in maintaining the buoyancy of the conserved natural site, assisting in biodiversity conservation.[16]

In the Christian liturgical calendar, there are two principal feasts, properly known as the Feast of the Nativity of our Lord (Christmas) and the Feast of the Resurrection, (Easter). In the Catholic, Eastern Orthodox, and Anglican liturgical calendars there are a great number of lesser feasts throughout the year commemorating saints, sacred events or doctrines. In the Philippines, each day of the year has at least one specific religious festival, either from Catholic, Islamic, or indigenous origins.[citation needed]

Buddhist religious festivals, such as Esala Perahera are held in Sri Lanka and Thailand.[17] Hindu festivals, such as Holi are very ancient. The Sikh community celebrates the Vaisakhi festival marking the new year and birth of the Khalsa.[18]

A food festival is an event celebrating food or drink. These often highlight the output of producers from a certain region. Some food festivals are focused on a particular item of food, such as the National Peanut Festival in the United States, or the Galway International Oyster Festival in Ireland. There are also specific beverage festivals, such as the famous Oktoberfest in Germany for beer. Many countries hold festivals to celebrate wine. One example is the global celebration of the arrival of Beaujolais nouveau, which involves shipping the new wine around the world for its release date on the third Thursday of November each year.[22][23] Both Beaujolais nouveau and the Japanese rice wine sake are associated with harvest time. In the Philippines, there are at least two hundred festivals dedicated to food and drinks.[citation needed]

Seasonal festivals, such as Beltane, are determined by the solar and the lunar calendars and by the cycle of the seasons, especially because of its effect on food supply, as a result of which there is a wide range of ancient and modern harvest festivals. Ancient Egyptians relied upon the seasonal inundation caused by the Nile River, a form of irrigation, which provided fertile land for crops.[24] In the Alps, in autumn the return of the cattle from the mountain pastures to the stables in the valley is celebrated as Almabtrieb. A recognized winter festival, the Chinese New Year, is set by the lunar calendar, and celebrated from the day of the second new moon after the winter solstice. Dree Festival of the Apatanis living in Lower Subansiri District of Arunachal Pradesh is celebrated every year from July 4 to 7 by praying for a bumper crop harvest.[25]

Midsummer or St John's Day, is an example of a seasonal festival, related to the feast day of a Christian saint as well as a celebration of the time of the summer solstice in the northern hemisphere, where it is particularly important in Sweden. Winter carnivals also provide the opportunity to utilise to celebrate creative or sporting activities requiring snow and ice. In the Philippines, each day of the year has at least one festival dedicated to harvesting of crops, fishes, crustaceans, milk, and other local goods.[citation needed]