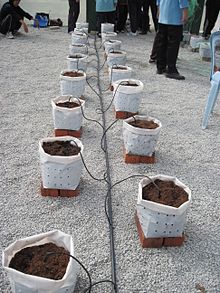 Fertigation is the injection of fertilizers, used for soil amendments, water amendments and other water-soluble products into an irrigation system.

Fertigation is related to chemigation, the injection of chemicals into an irrigation system. The two terms are sometimes used interchangeably however chemigation is generally a more controlled and regulated process due to the nature of the chemicals used. Chemigation often involves insecticides herbicides, and fungicides, some of which pose health threat to humans, animals, and the environment.

Fertigation is practiced extensively in commercial agriculture and horticulture. Fertigation is also increasingly being used for landscaping as dispenser units become more reliable and easier to use. Fertigation is used to add additional nutrients or to correct nutrient deficiencies detected in plant tissue analysis. It is usually practiced on the high-value crops such as vegetables, turf, fruit trees, and ornamentals.

Most plant nutrients can be applied through irrigation systems. Nitrogen is the most commonly used plant nutrient. Naturally occurring nitrogen (N2) is a diatomic molecule which makes up approximately 80% of the earth's atmosphere. Most plants cannot directly consume diatomic nitrogen, therefore nitrogen must be contained as a component of other chemical substances which plants can consume. Commonly, anhydrous ammonia, ammonium nitrate, and urea are used as bioavailable sources of nitrogen. Other nutrients needed by plants include phosphorus and potassium. Like nitrogen, plants require these substances to live but they must be contained in other chemical substances such as monoammonium phosphate or diammonium phosphate to serve as bioavailable nutrients. A common source of potassium is muriate of potash which is chemically potassium chloride.[1] A soil fertility analysis is used to determine which of the more stable nutrients should be used.

The benefits of fertigation methods over conventional or drop-fertilizing methods include:

Fertigation assists distribution of fertilizers for farmers. The simplest type of fertigation system consists of a tank with a pump, distribution pipes, capillaries, and a dripper pen.

All systems should be placed on a raised or sealed platform, not in direct contact with the earth. Each system should also be fitted with chemical spill trays.

Because of the potential risk of contamination in the potable (drinking) water supply, a backflow prevention device is required for most fertigation systems. Backflow requirements may vary greatly. Therefore, it is very important to understand the proper level of backflow prevention required by law. In the United States, the minimum backflow protection is usually determined by state regulation. Each city or town may set the level of protection required.