Peasants on a country road

Ferdinand van Apshoven the Younger was born in Antwerp as the son of Ferdinand van Apshoven the Elder and Leonora Wijns. His father was a painter who had studied with Adam van Noort and had become a master of the Antwerp Guild of Saint Luke in 1596. No paintings by his father are known.[4] Ferdinand had 7 siblings of whom his brother Thomas was a successful painter of genre scenes.[2]

He is believed to have studied with his father and some sources insist that he also was a pupil of David Teniers the Younger. He travelled abroad since it is reported that he was abroad when his father died on 8 November 1654. Upon his return to Antwerp in 1657 he was registered as a master painter and art dealer in the Guild in the capacity of a wijnmeester' (son of a master).[5]

He became dean of the Guild between 18 September 1678 and 18 September 1679 but the function was in fact performed by Martin Verhulst (I). When he died he lived in a house on the Blouwhantse Ruy in Antwerp.[2] 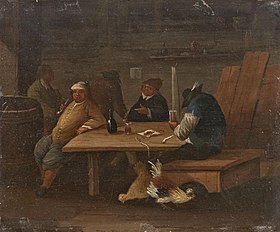 Drinkers and smokers in an interior

His pupils include Melsen de Grée (or Melchior de Gra).[2][4]

Van Apshoven was mainly active as an art dealer. His known works are in the style and treat the same genre subjects as David Teniers the younger. Some of his works have been attributed erroneously to Teniers.[7]

Van Apshoven is particularly known for his scenes of peasants, tavern interiors, rural landscapes and singeries. He may also have painted still lifes.[2]