The Federated Malay States (FMS) was a federation of four protected states in the Malay Peninsula—Selangor, Perak, Negeri Sembilan and Pahang—established by the British government in 1895, which lasted until 1946, when they, together with two of the former Straits Settlements (Malacca and Penang) and the Unfederated Malay States, formed the Malayan Union. Two years later, the Union became the Federation of Malaya, which achieved independence in 1957, and finally Malaysia in 1963 with the inclusion of North Borneo (present-day Sabah), Sarawak and Singapore.

Real power in the FMS and its constituent states rested with the four local British Residents and the Resident-General, the discretionary powers of the local sultans being essentially reduced to matters "touching Malay Religion and Customs".

The federation, along with the other Malay states and British possessions of the peninsula, was overrun and occupied by the Japanese during World War II. After the liberation of Malaya following the Japanese surrender, the federation was not restored, but the federal form of government was retained as the principal model for consolidating the separate States as an independent Federation of Malaya and the Federation's later evolution into Malaysia.

On 20 January 1874, Sir Andrew Clarke, governor of the Straits Settlements, concluded with the Sultan of Perak the treaty of Pangkor whereby the Sultan agreed to "receive and provide a suitable residence for a British Officer to be called Resident, who shall be accredited to his court, and whose advice must be asked and acted upon on all questions other than those touching Malay Religion and Customs". The residency system was extended the same year to the states of Selangor and Negri Sembilan, and in 1888 to Pahang. [1]

To promote greater administrative efficiency, these four states were brought together in 1895-1896 to form the Federated Malay States. This structure was highly centralized, real power resting in the hands of the agents of the British Government, at first called the Resident-General, and later the Chief Secretary.[2]

The British established the Federal Council in 1898 to administer the Federation. It was headed by the High Commissioner (The Governor of the Straits Settlement), assisted by the Resident-General, the Sultans, the four state Residents and four nominated unofficial members. This structure remained until the Japanese invaded Malaya on 8 December 1941.

The sultans and First Durbar

Although the Resident-General was the real administrator of the federation, each of the four constituent states of the federation retained their respective hereditary rulers (sultans). At the formation of the Federated Malay States, the reigning sultans were:

In 1897 the first Durbar was convened in the royal town of Kuala Kangsar, Perak as the platform for discussions for the four Rulers. This formed the basis for the Conference of Rulers that was created later on under Article 38 of the Malaysian Constitution on 27 August 1957.

Flag and emblem of the Federation

The Federated Malay States had a flag of its own until its dissolution in 1946. The flag consisted of four different-coloured stripes, from top to bottom: white, red, yellow and black. Different combinations of these colours represent the four states that formed the FMS — red, black and yellow are for Negeri Sembilan; black and white for Pahang; black, white and yellow for Perak; and red and yellow for Selangor. The same design concept is used in Malaysian national emblem. In the middle is an oblong circle with a Malayan tiger in it.

The National History Museum located near the Dataran Merdeka in Kuala Lumpur, Malaysia has a replica of the federation's flag.

The coat of arms of the Federated Malay States featured a shield guarded by two tigers. On the top of the shield is the crown (known as Eastern Crown in English heraldry), symbolising the federation of monarchies under the protection of the United Kingdom. A banner with the phrase "Dipelihara Allah" (Under God's (Allah) Protection) written in Jawi is located underneath the shield.

This design forms the basis of the Federation of Malaya's national emblem along with the guardian tigers and a quartered shield of the same, symbolic four colours mentioned above.

The phrase "Dipelihara Allah" was also adopted as the current state motto for the state of Selangor.

In addition to a state flag, the Federated Malay States also had a naval jack or ensign for use on government ships. The ensign, with the four colours of the FMS, was flown by HMS Malaya, commanded by Captain Boyle under the 5th Battle Squadron of the British Grand Fleet) during the Battle of Jutland in the North Sea. This was the largest and the only full-scale clash of battleships during World War I.

From 1896 to 1936, real power lay in the hands of the Resident-General, later known as Chief Secretary of the Federation.

Chief Secretary to the Government

Flag of the Chief Secretary of the Federated Malay States

After 1936 the Federal Secretaries were no more than co-ordinating officers, under the authority of the High Commissioners, which are always the Governors of the Straits Settlements

In the Federated Malay States, the individual State were still ruled by the Sultan but was now advised by the State Council for the purpose of administrating the State. The State Council was made up of the Resident (or in certain cases by the Secretary to the Resident), native chiefs, and representative(s) of the Chinese community nominated by the Sultan. The council discussed matters of interest for each respective state such as legislative and administrative issues as well as revision of all sentence of capital punishment. The Resident and his staff (mostly consist of European and Malay) carried on with the administrative work. 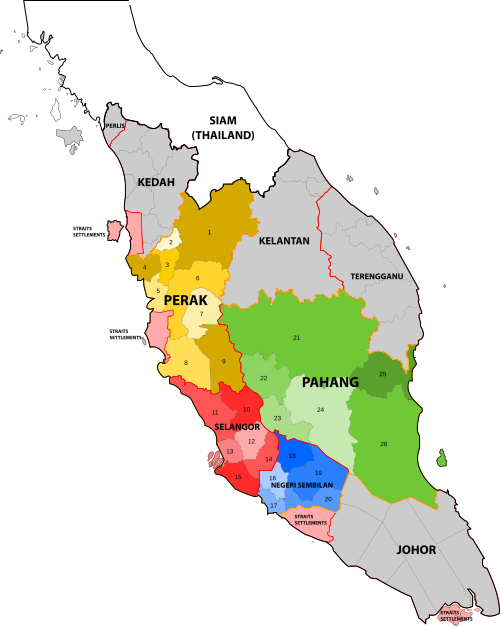 Notes:
1. The territories of Dinding and Pangkor Island was ceded to the British, administered as part of the Straits Settlements. Returned to the government of Perak in February 1935.[4]
2. The capital of Perak was moved to Ipoh in 1935 and has remained there ever since.

Notes:
Tanjung Tuan (also known as Cape Rachado) was a Dutch possession (originally Portuguese before 1641), passed to the British in 1824. Administered as an exclave of Malacca until today.

Notes:
The capital of Pahang was Kuala Lipis until 1953 when it moved to Kuantan.

The Federated Malay States as a Forerunner to Malaysia 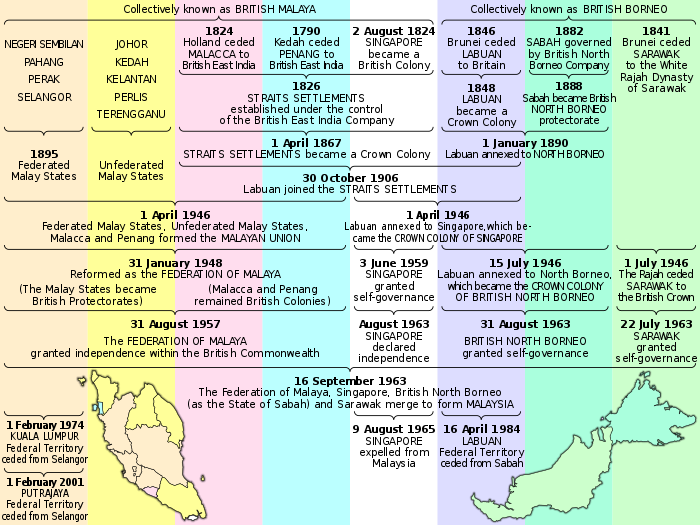 The Federated Malay States main economic activity was mostly focused on agriculture and mining with emphasis on rubber and tin. FMS and Malaya as a whole was the main supplier of these two commodities for the British industrial need. Rubber estates or plantations were established in all four states and tin was mined primarily in the Klang valley in Selangor and the Kinta Valley in Perak. This labour-intensive economic activities prompted the British to bring in immigrant workers from southern India to work at the plantations and workers from southern China to mine the tin.

The economic condition in the period can be viewed as self-sustainable, as the income of the federation was more than what was expended in terms of maintaining the administration and economic activities. In the later period, many resources were poured into the development of the city of Kuala Lumpur, as the capital of the federation. This period also saw rapid growth in terms of communications infrastructure such as interstate roads, the expansion of the Federated Malay States Railways' narrow gauge railway line between the Padang Besar and Singapore, and Port Swettenham (present-day Port Klang). Public schools and academic institutions were also opened along with an improvement in public health. An area in the city was also gazetted as a settlement for the Malay called Kampung Baru. Public buildings were also constructed such as the Kuala Lumpur railway station, the Government Offices of the FMS and Masjid Jamek.

The table and section below illustrated the economic growth of the federation and its member states.

Note: All values are in Straits dollars (One dollar fixed at two shillings and four pence sterling). Data for Pahang included only from 1890 onwards

WWI and the FMS

With the threat of Germany, the British Navy was in a drive for expansion. As a contribution, the Government and people of the Federated Malay States agreed to finance the commissioning of HMS Malaya; this was a motion proposed in the Federal Council by the Sultan of Perak in 1913 and supported by the Sultan of Selangor. The battleship which cost $25,000,000 (approximately £2,945,709) was one of five of the Queen Elizabeth class, displacing 31,000 tons, mounting fifteen-inch guns and capable of 25 knots (46 km/h). The most modern ships of their day, they formed the 5th Battle Squadron and fought as such at Jutland in 1916. HMS Malaya was also refurbished and was in service throughout World War II.

See also: Sinking of Prince of Wales and Repulse and Battle of Malaya

After the Japanese landed in Malaya on 8 December 1941, the Japanese forces began their invasion of the Malay Peninsula. Japanese forces began their invasion of the FMS by crossing the Thailand–FMS border at Kroh. Ipoh, the state capital of Perak, fell on 26 December 1941. Kuala Lumpur, the capital of the Federated Malay States and the State of Selangor, was captured on 11 January 1942. Seremban, the state capital of Negeri Sembilan, was captured two days later. Kuantan, in the eastern component state of Pahang, fell on 30 December 1941, meanwhile the capital, Kuala Lipis was taken by the Japanese on 7 January 1942. With the conclusion of the Battle of Gemas on 15 January 1942, the entire FMS was now in Japanese hands.

All of Malaya including Singapore remained under Japanese occupation until the surrender of the Japanese home islands.

Dissolution of the FMS

After the war the federation was dissolved formally on 1 April 1946, and was incorporated into the Malayan Union thereafter. This in turn was succeeded by the Federation of Malaya in 1948, which gained independence in 1957, and finally the establishment of Malaysia in 1963. 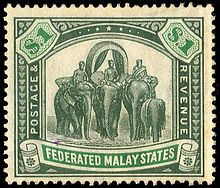 Stamp issued by the Federated Malay States in 1906

While the four states issued their own postage stamps as before, there were additional issues for the Federated States as a whole.

The Federated Malay States were within the flight path of American aviator Amelia Earhart on the Thailand–Singapore leg of her final and fatal attempt to cross the globe in 1937. She was given permission to enter FMS airspace with provision to land at Taiping Airport on 7 June 1937.