The federal government of Nigeria is composed of three distinct branches: legislative, executive, and judicial, whose powers are vested by the Constitution of Nigeria in the National Assembly, the President, and the federal courts, including the Supreme Court, respectively.

Nigeria is a federal republic, with executive power exercised by the president. The president is the head of state, the head of government, and the head of a multi-party system. Nigerian politics takes place within a framework of a federal, presidential, representative democratic republic, in which executive power is exercised by the government. Legislative power is held by the real[clarification needed] government and the two chambers of the legislature: the House of Representatives and the Senate. Together, the two chambers make up the law-making body in Nigeria, called the National Assembly, which serves as a check on the executive arm of government. The highest judiciary arm of government in Nigeria is the Supreme Court of Nigeria which was created after independence and also practices Baron de Montesquieu's theory of the separation of powers[1] based on the United States system and also practises checks and balances.[2][failed verification]

The Economist Intelligence Unit rated Nigeria a "hybrid regime" in 2019.[3]

The law of Nigeria is based on the rule of law, the independence of the judiciary, and British common law (due to the long history of British colonial influence). The common law in the legal system is similar to common-law systems used in England and Wales and other Commonwealth countries. The constitutional framework for the legal system is provided by the Constitution of Nigeria.

There is a judicial branch, with the Supreme Court regarded as the highest court of the Nation.

Legislation as a source of Nigerian law

The two fundamental sources of Nigerian law through legislation are[4]

(1) Acts of British parliament, popularly referred to as statutes of general application.[when?]

The grant of independence to Nigeria was a milestone in the political history of the country. This period witnessed the consolidation of political gains made during the colonial era. Politicians genuinely focused their lapses in the polity. It achieved for herself a republican status by shaking off the last vestiges of colonial authority. However, despite the violent violation of its provisions, the constitution remained the subsequent administrations (military or otherwise).

The breakdown of law and order which occurred in the period under review would not be attributed to any defect in the Nigerian legal system. Corrupt practices both in the body politic and all aspects of Nigerian life eroded efficiency and progress. There were 8 coups generally five were successful and 3 were unsuccessful. 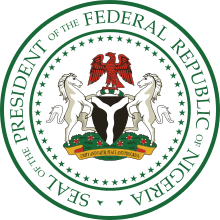 Seal of the President of the Federal Republic of Nigeria.

The president is elected through universal suffrage. He or she is both the chief of state and head of government, heading the Federal Executive Council, or cabinet.

The executive branch is divided into Federal Ministries, each headed by a minister appointed by the president. The president must include at least one member from each of the 36 states in his cabinet. The President's appointments are confirmed by the Senate of Nigeria. In some cases, a federal minister is responsible for more than one ministry (for example, Environment and Housing may be combined), or a minister may be assisted by one or more ministers of State.[5] Each ministry also has a Permanent Secretary, who is a senior civil servant.[6]

The ministries are responsible for various parastatals (government-owned corporations), such as universities, the National Broadcasting Commission, and the Nigerian National Petroleum Corporation. However, some parastatals are the responsibility of the Office of the Presidency, such as the Independent National Electoral Commission, the Economic and Financial Crimes Commission and the Federal Civil Service Commission.[7]

House of Representatives of Nigeria.

The judicial branch consists of the Supreme Court of Nigeria, the Court of Appeals, the High Courts, and other trial courts such as the Magistrates', Customary, Sharia and other specialised courts.[8] The National Judicial Council serves as an independent executive body, insulating the judiciary from the executive arm of government.[9] The Supreme Court is presided over by the Chief Justice of Nigeria and thirteen associate justices, who are appointed by the President of Nigeria on the recommendation() of the National Judicial Council. These justices are subject to confirmation by the Senate.

Each state is further divided into Local Government Areas (LGAs). There are 774 LGAs in Nigeria.[10] Kano State has the largest number of LGAs at 44, and Bayelsa State has the fewest at 9. The Federal Capital Territory of Abuja has 6 LGAs.[10] LGAs replaced the Districts that were the previous third-tier administrative units under the British government.

The military of Nigeria has played a major role in the country's history, often seizing control of the country and ruling it for long periods of time. Its last period of rule ended in 1999, following the death of the leader of the previous military junta Sani Abacha in 1998.

Active duty personnel in the three Nigerian armed services totals approximately 76,000. The Nigerian Army, which is the largest of the services, has about 60,000 personnel, deployed between two mechanized infantry divisions, one composite division (airborne and amphibious), the Lagos Garrison Command (a division-size unit), and the Abuja-based Brigade of Guards.[citation needed] The Nigerian Navy (7,000) is equipped with frigates, fast attack craft, corvettes, and coastal patrol boats. The Nigerian Air Force (9,000) flies transports, trainers, helicopters, and fighter aircraft; however, most of their vehicles are currently not operational. Recently, Marshal of the Nigerian Air Force, Sadique Abubakar, suggested the purchase of equipment after dumping the non-operational vehicles.

Nigeria currently has better foreign relations with its neighbors, due to its current state of democracy. It is a member of the African Union and sits on that organization's Peace and Security Council. In 1960, Nigeria joined both the United Nations and the Commonwealth of Nations; however, they were briefly suspended between 1995 and 1999.