listen))[4] is one of 27 federative units of Brazil. Located in the Center-West Region, it is the smallest Brazilian federal unit and the only one that has no municipalities, being divided into 31 administrative regions, totaling an area of 5,802 km². The federal capital of Brazil, Brasília, which is also the seat of government of the Federal District, is located in its territory.

From the first republican constitution there was already a device that foresaw the move of the federal capital of Rio de Janeiro, at that time in the former Federal District (1889-1960), to the interior of the country. In 1891 the Exploration Commission of the Central Highlands of Brazil was appointed, led by astronomer Luiz Cruls and composed of doctors, geologists and botanists, who made a study on topography, climate, geology, flora, fauna and other material resources of the region of the Central Highlands The area was known as Quadrilateral Cruls and was presented in 1894 to the Republican Government.

In 1922 a commission of the Federal Government established the location in Goiás, but the project was closed. Only in 1955, during a few elections, the then presidential candidate Juscelino Kubitschek said he would transfer the capital. Elected president, he established the construction of Brasilia as a meta-synthesis of his Plano de Metas.

The region has a tropical savanna climate ("Aw" according to the Köppen system), with a rainy season from October to April, and a dry season from May to September. During the dry season (winter), the humidity can reach critical levels, mainly in the peak hours of the hottest days. The artificial Paranoá Lake, with almost 40 km2 (15 sq mi) and 500 million cubic metres (410,000 acre⋅ft) of water, was built to minimize the severe dry climatic conditions of winter in the Cerrado vegetation.

In area, the Federal District is more than double the size of Tokyo (Japan) or the island of Maui (Hawaii, USA). It is slightly larger than French Polynesia, the US State of Rhode Island, or Cape Verde. It is slightly smaller than Bali (Indonesia) or Trinidad and Tobago. The District is surrounded in almost its entirety by Goiás except for a short stretch along the Preto River with Minas Gerais. The District's eastern boundary is marked by the aforementioned Preto River, an eventual tributary of the São Francisco, and its western boundary by the Descoberto, an eventual tributary of the Río de la Plata. The northern and southern boundaries are roughly straight lines. 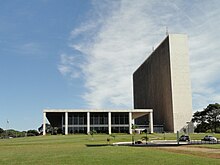 Buriti Palace, seat of the government of the Federal District.

Headquarters of the Legislative Chamber of the Federal District.

The politics and administration of the Federal District are distinguished from the other units of the federation in some particular points, as defined in the Brazilian Constitution of 1988:[7]

The Federal District is a legal entity of internal public law, which is part of the political-administrative structure of Brazil, of a nature sui generis, because it is neither a state nor a municipality, but a special entity that accumulates the legislative powers reserved to the states and the municipalities, as provided in art. 32, § 1º of the CF, which gives it a hybrid nature of state and municipality.[7]

Located in Brasília, the "Parque da Cidade" ("City Park"), which is named after the wife of Brazilian president Juscelino Kubitschek, extends over four million square meters. It includes landscape works of Burle Marx, and wall tiles that decorate restrooms in the park designed by Athos Bulcão. Equipped with sports courts, a horse track, a racing kart track, skate tracks, playgrounds for children, bicycle tracks and trails for walks and jogging, the City Park attracts hundreds of people everyday, specially on weekends. The park's main entrance is located in the Monumental Axis South, but there are secondary exits that lead to other areas in the city's south wing.

The Metropolitan Cathedral of Brasilia

Designed by Oscar Niemeyer, it was inaugurated in 1970. Its shape is circular horizontally and structured around 16 curved pillars, forming a crown filled with futuristic and/or spatial stained-glass works in a triangular shape. The pillars evoke reversed praying hands that deconstruct the gothic traditional church window pattern, but conserves the triangular vaginal shape of the stained-glasses. The curves present in many of Niemeyer's works pay homage to the beautifully built bodies of Brazilian women.

The stained-glasses were designed by Marianne Peretti. Their disposition ensures natural lighting into the aisle, which was built below street level. Around the church, in the outside area, visitors can see Alfredo Ceschiatti's sculptures — the four evangelists — and inside, suspended angels. There are also paintings by Emiliano Di Cavalcanti, representing the stages of the Passion of Christ, and paintings by Athos Bulcão. The Cathedral is located in the Eixo Monumental mall, at the entry to the Esplanada dos Ministerios, or Ministries Sector.

Praça dos Três Poderes concentrates some of the most important and significant buildings in the work and career of Oscar Niemeyer — the Planalto Palace, headquarters of Brazilian Presidency; the National Congress, hosting the Chamber of Deputies and the Federal Senate; and the Higher Courts of Justice. The Square also hosts: the Panteão da Pátria (Pantheon of the Fatherland), the Lúcio Costa Space and three important sculptures — "Pombal", by Niemeyer; "Justice", by Alfredo Ceschiatti; and "Os Candangos", by Bruno Giorgi. In the central plaza, a giant Brazilian national flag 286 square meters (3,080 sq ft) is supported by a triangular black 100-meter (330 ft) and high pole. It is located at the end of the Esplanada dos Ministerios.

Brasília International Airport is the third largest in Brazil in terms of passenger movement. Because of its strategic location it is considered a civil aviation hub for the rest of the country. This makes for a large number of takeoffs and landings and it is not unusual for flights to have to wait in the holding pattern to land. Following the airport's master plan, Infraero built a second runway in 2005. In 2003, the fourth phase of the passenger terminal expansion was completed. It raised its capacity to 7.4 million passengers a year. The third floor of the main building, with 12 thousand square meters, has a panoramic deck, a food court, shops, four movie theaters with total capacity of 500 people, and space for exhibitions. There are a total of 136 shop spots at the Brasília Airport.

There is a rapid transit system, the Brasília Metro, serving some cities. It is operated by Metrô-DF (Companhia do Metropolitano do Distrito Federal) and was inaugurated in 2001. The system has 29 stations (24 in operation)[13] on two lines, and operates from 06:00 to 23:30, Monday to Friday and from 07:00 to 19:00 on weekends. It serves the southern half of Brasília and the main cities to the west. Its main problem is the large distance between many of the stations caused by the low housing density for such a system. This makes it a small component in the Federal District transit system where a low-efficiency bus network is still predominant. Águas Claras is well served by the metro, making it one of the fastest growing areas and the most dense in the Federal District.

Brasília is known as a departing point for the practice of free flying sports, a sport that may be practiced with Hang Gliding or Paragliding wings. Practitioners of such sports reveal that, because of the city's dry weather, the city offers strong thermal winds and great "cloud-streets" – which is also the name for a manoeuvre quite appreciated by practitioners. The national capital hosted the 14th Hang Gliding World Championship – one of the categories of free flying – in 2003. In August 2005, it hosted the 2nd stage of the Brazilian Hang Gliding Championship.

Brasília is one of the 12 cities that hosted the games of the 2014 FIFA World Cup, which took place in the country.

The flag of the Federal District

The white background of the flag stands for peace, and gives the idea of infinity, or the vast Brazilian territory. The green and yellow colours in the middle refer to the most commonly used of the four colours of the national flag to represent Brazil. The four yellow arrows symbolize the native nations of Brazil, whereas their pointing into the four cardinal directions of the compass stands for the centralized emanating political power of Brasilia, as the capital of the country. The yellow arrows also form a cross, which symbolizes both the Southern Cross, a constellation seen only in the Southern Hemisphere and the Roman Catholic or Christian symbol of redemption brought by Pedro Álvares Cabral and under whose shadow the first Mass in Brazil was celebrated in 1500 in Bahia. With their feathers, the arrows form a lozenge in the middle, a reference to yellow lozenge of the national flag, that stands for Brazil's mineral riches.

The flag was created by the poet and herald Guilherme de Almeida, and was adopted by decree n.o 1090 on August 25, 1969.

The Federal District has eight seats in the Chamber of Deputies[14] and three in the Federal Senate.[15] Its population also votes its governor and district deputies (which function as both state deputies and aldermen in the municipalities), but not regional administrators, which are appointed by the governor itself, respecting the government centrality of the Federal District.