Seismic wave Shear (geology) Detachment fault
"Fault line" redirects here. For other uses, see Fault line (disambiguation).
Fracture or discontinuity in rock across which there has been displacement 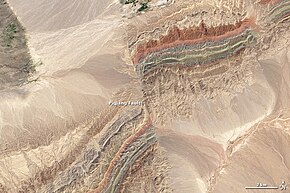 In geology, a fault is a planar fracture or discontinuity in a volume of rock across which there has been significant displacement as a result of rock-mass movement. Large faults within the Earth's crust result from the action of plate tectonic forces, with the largest forming the boundaries between the plates, such as subduction zones or transform faults.[1] Energy release associated with rapid movement on active faults is the cause of most earthquakes. Faults may also displace slowly, by aseismic creep.

A fault plane is the plane that represents the fracture surface of a fault. A fault trace or fault line is a place where the fault can be seen or mapped on the surface. A fault trace is also the line commonly plotted on geologic maps to represent a fault.[2][3]

Since faults do not usually consist of a single, clean fracture, geologists use the term fault zone when referring to the zone of complex deformation associated with the fault plane. 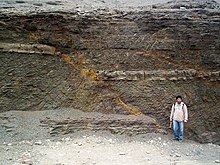 Owing to friction and the rigidity of the constituent rocks, the two sides of a fault cannot always glide or flow past each other easily, and so occasionally all movement stops. The regions of higher friction along a fault plane, where it becomes locked, are called asperities. Stress builds up when a fault is locked, and when it reaches a level that exceeds the strength threshold, the fault ruptures and the accumulated strain energy is released in part as seismic waves, forming an earthquake.

Strain occurs accumulatively or instantaneously, depending on the liquid state of the rock; the ductile lower crust and mantle accumulate deformation gradually via shearing, whereas the brittle upper crust reacts by fracture – instantaneous stress release – resulting in motion along the fault. A fault in ductile rocks can also release instantaneously when the strain rate is too great. 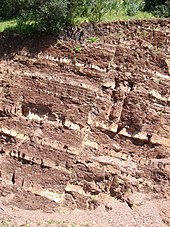 A fault in Morocco.The fault plane is the steeply leftward-dipping line in the centre of the photo, which is the plane along which the rock layers to the left have slipped downwards, relative to the layers to the right of the fault.

Slip is defined as the relative movement of geological features present on either side of a fault plane. A fault's sense of slip is defined as the relative motion of the rock on each side of the fault with respect to the other side.[4] In measuring the horizontal or vertical separation, the throw of the fault is the vertical component of the separation and the heave of the fault is the horizontal component, as in "Throw up and heave out".[5] 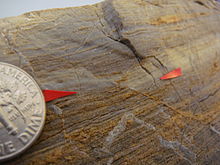 Microfault showing a piercing point (the coin's diameter is 18 mm)

The vector of slip can be qualitatively assessed by studying any drag folding of strata,[clarification needed] which may be visible on either side of the fault; the direction and magnitude of heave and throw can be measured only by finding common intersection points on either side of the fault (called a piercing point). In practice, it is usually only possible to find the slip direction of faults, and an approximation of the heave and throw vector.

Based on the direction of slip, faults can be categorized as:

In a strike-slip fault (also known as a wrench fault, tear fault or transcurrent fault),[8] the fault surface (plane) is usually near vertical, and the footwall moves laterally either left or right with very little vertical motion. Strike-slip faults with left-lateral motion are also known as sinistral faults, and those with right-lateral motion as dextral faults.[9] Each is defined by the direction of movement of the ground as would be seen by an observer on the opposite side of the fault.

A special class of strike-slip fault is the transform fault, when it forms a plate boundary. This class is related to an offset in a spreading center, such as a mid-ocean ridge, or, less common, within continental lithosphere, such as the Dead Sea Transform in the Middle East or the Alpine Fault in New Zealand. Transform faults are also referred to as "conservative" plate boundaries, inasmuch as lithosphere is neither created nor destroyed.

Normal faults in Spain, between which rock layers have slipped downwards (at photo's centre)

Dip-slip faults can be either normal ("extensional") or reverse. 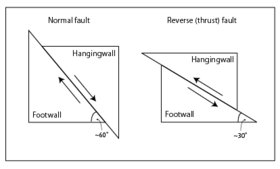 A reverse fault is the opposite of a normal fault—the hanging wall moves up relative to the footwall. Reverse faults indicate compressive shortening of the crust. The dip of a reverse fault is relatively steep, greater than 45°. The terminology of "normal" and "reverse" comes from coal-mining in England, where normal faults are the most common.[10]

A thrust fault has the same sense of motion as a reverse fault, but with the dip of the fault plane at less than 45°.[11][12] Thrust faults typically form ramps, flats and fault-bend (hanging wall and footwall) folds. 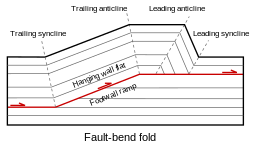 Flat segments of thrust fault planes are known as flats, and inclined sections of the thrust are known as ramps. Typically, thrust faults move within formations by forming flats and climb up sections with ramps.

Fault-bend folds are formed by movement of the hanging wall over a non-planar fault surface and are found associated with both extensional and thrust faults.

Faults may be reactivated at a later time with the movement in the opposite direction to the original movement (fault inversion). A normal fault may therefore become a reverse fault and vice versa.

Thrust faults form nappes and klippen in the large thrust belts. Subduction zones are a special class of thrusts that form the largest faults on Earth and give rise to the largest earthquakes.

A fault which has a component of dip-slip and a component of strike-slip is termed an oblique-slip fault. Nearly all faults have some component of both dip-slip and strike-slip; hence, defining a fault as oblique requires both dip and strike components to be measurable and significant. Some oblique faults occur within transtensional and transpressional regimes, and others occur where the direction of extension or shortening changes during the deformation but the earlier formed faults remain active.

The hade angle is defined as the complement of the dip angle; it is the angle between the fault plane and a vertical plane that strikes parallel to the fault. 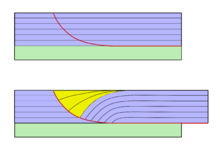 Listric faults are similar to normal faults but the fault plane curves, the dip being steeper near the surface, then shallower with increased depth. The dip may flatten into a sub-horizontal décollement, resulting in horizontal slip on a horizontal plane. The illustration shows slumping of the hanging wall along a listric fault. Where the hanging wall is absent (such as on a cliff) the footwall may slump in a manner that creates multiple listric faults.

Ring faults, also known as caldera faults, are faults that occur within collapsed volcanic calderas[13] and the sites of bolide strikes, such as the Chesapeake Bay impact crater. Ring faults are result of a series of overlapping normal faults, forming a circular outline. Fractures created by ring faults may be filled by ring dikes.[13] 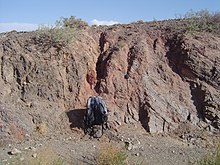 All faults have a measurable thickness, made up of deformed rock characteristic of the level in the crust where the faulting happened, of the rock types affected by the fault and of the presence and nature of any mineralising fluids. Fault rocks are classified by their textures and the implied mechanism of deformation. A fault that passes through different levels of the lithosphere will have many different types of fault rock developed along its surface. Continued dip-slip displacement tends to juxtapose fault rocks characteristic of different crustal levels, with varying degrees of overprinting. This effect is particularly clear in the case of detachment faults and major thrust faults.

The main types of fault rock include:

Impacts on structures and people

In geotechnical engineering a fault often forms a discontinuity that may have a large influence on the mechanical behavior (strength, deformation, etc.) of soil and rock masses in, for example, tunnel, foundation, or slope construction.

The level of a fault's activity can be critical for (1) locating buildings, tanks, and pipelines and (2) assessing the seismic shaking and tsunami hazard to infrastructure and people in the vicinity. In California, for example, new building construction has been prohibited directly on or near faults that have moved within the Holocene Epoch (the last 11,700 years) of the Earth's geological history.[15] Also, faults that have shown movement during the Holocene plus Pleistocene Epochs (the last 2.6 million years) may receive consideration, especially for critical structures such as power plants, dams, hospitals, and schools. Geologists assess a fault's age by studying soil features seen in shallow excavations and geomorphology seen in aerial photographs. Subsurface clues include shears and their relationships to carbonate nodules, eroded clay, and iron oxide mineralization, in the case of older soil, and lack of such signs in the case of younger soil. Radiocarbon dating of organic material buried next to or over a fault shear is often critical in distinguishing active from inactive faults. From such relationships, paleoseismologists can estimate the sizes of past earthquakes over the past several hundred years, and develop rough projections of future fault activity.

Many ore deposits lie on faults. This is due to the fact that damaged fault zones allow for the circulation of mineral-bearing fluids. Intersections of near-vertical faults are often locations of significant ore deposits.[16]