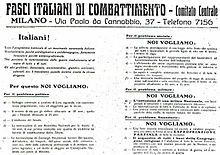 The platform of Fasci italiani di combattimento, as published in Il Popolo d'Italia

On 23 March 1919, the Fasci d'Azione Rivoluzionaria was renamed in Fasci Italiani di Combattimento. In 1919, the Treaty of Versailles resulted in Italy obtaining Southern Tyrol, Trentino, Istria and Trieste from Austria. However, Italy also wanted Fiume and the region of Dalmatia on the Adriatic coast, hence they felt treated unfairly. In March 1919, Mussolini set up the Fasci di Combattimento (the fighting group), which galvanised the support of the disgruntled, unemployed war veterans. The Arditi, (The blackshirts, from the Italian commandos) were angry about the problems in Italy. Mussolini sympathised with them, claiming he shared their war experiences, hence they joined the Fasci, eventually becoming the Squadrismo.

In the election of 1919, Mussolini and his party put forth a “decidedly leftist” and anti-clerical program which called for higher inheritance and capital-gains taxes and the ousting of the monarchy.[4] He also proposed an electoral alliance with the socialists and other parties on the left, but was ignored over concerns that he would be a liability with the voters. During the election, Mussolini campaigned as the “Lenin of Italy” in an effort to “out-socialist the socialists.”[5]:284, 297 Mussolini and his party failed miserably against the socialists who garnered forty times as many votes, an election so dismal that even in Mussolini’s home village of Predappio, not a single person voted for him.[4] In a mock funeral procession after the election, members of Mussolini’s former Italian Socialist Party, carried a coffin that bore Mussolini’s name, parading it past his apartment to symbolize the end of his political career.[6]

Due to the disastrous results in the November 1919 election, Mussolini contemplated a name change for his Fascist party. By 1921, Mussolini favored a plan to rename the Fasci Italiani di Combattimento to the “Fascist Labor Party” or “National Labor Party” at the Third Fascist Congress in Rome (November 7-10, 1921), in an effort to maintain his reputation as being loyal to the left-wing tradition of supporting trade unionism.[7] Mussolini envisaged a more successful political party if it was based on a fascist coalition of labor syndicates.[8] This alliance with socialists and labor was described as a sort of “nationalist-leftist coalition government”, but was opposed by both more conservative fascist members and the governing Italian Liberal Party of Giovanni Giolitti, who already had decided to include the Fascists in their National Blocs.[7]

In 1921, this fascio would be transformed into the National Fascist Party (Italian: Partito Nazionale Fascista, PNF). Mussolini combined ideologies from a few different political parties. He started his political life as a socialist, eventually editor of the socialist magazine Avanti, but was expelled when he supported intervention in World War I. He then started a group called the Fascio di Combattimento (League of Combat), which at first didn't gain much popularity. In 1919, a three-party government was formed, leaning toward a democratic side of government.

The Fasci was strongly based on Mazzinian politics, such as following Mazzini's denouncement of irreligious, non-mystic, class conflict-based socialism,[9]:42 and in particular, Mazzini's theme of mobilizing the masses based on faith rather than materialism.[9]:44 In March 1915, Mussolini described Mazzini and other Italian patriots as having "awoken" Italians in Risorgimento, who up to then had been a "sleeping people."[9]:44 Mussolini like Mazzini accused conventional socialists for being dogmatic and in December 1914 had criticized the Italian Socialist Party (PSI) for their association with Marxism that Mussolini declared had become obsolete; and made a list of socialist figures ranging from the top of admirable socialist figures like Mazzini, Proudhon, Bakunin, Fourier, and Saint-Simon at the top to Marx at the bottom.[9]:44 He said that he and other Italian interventionist socialists sought to "repudiate Marx" and "return to Mazzini."[9]:44 This perception of Mazzini by Mussolini was influenced by Mussolini's idealization of philosopher Friedrich Nietzsche's übermensch and his idealization of revolutionary syndicalist Georges Sorel. In a 1909 review of Sorel's works, Mussolini indicated that he became a syndicalist when Sorel said "we syndicalists."[9]:44