Far-left politics are politics further to the left of the left–right political spectrum than the standard political left.

There are different definitions of the far-left. Some scholars define it as representing the left of social democracy while others limit it to the left of communist parties. In certain instances, the term far-left has been associated with forms of anarchism, autonomism and communism.[citation needed] Groups that advocate for revolutionary anti-capitalism and anti-globalization have been characterized as far-left.[citation needed]

Extremist far-left politics can involve violent acts and the formation of far-left militant organizations meant to abolish capitalist systems and the upper ruling class. Far-left terrorism consists of groups that attempt to realize their radical ideals and bring about change through violence rather than established political processes.

The definition of the far-left has varies in the literature and there is not a general agreement on what it entails or consensus on the core characteristics that constitute the far-left, other than being to the left of "the left". Scholars such as Luke March and Cas Mudde propose that socio-economic rights are at the radical left's core. Moreover, March and Mudde argue that the far-left is to the left of "the left" with regard to how parties or groups describe economic inequality on the base of existing social and political arrangements.[1]

Luke March, Senior Lecturer in Soviet and post-Soviet Politics at Politics and International Relations of the University of Edinburgh, defines the far-left as those who position themselves to the left of social democracy which they see as insufficiently left-wing. The two main sub-types are called "the radical left" which desires fundamental changes in neoliberal capitalism and progressive reform of democracy such as direct democracy and the inclusion of marginalised communities; and "the extreme left" which denounces liberal democracy as a "compromise with bourgeois political forces" and defines capitalism more strictly. In his later conceptualization, March started to refer to far-left politics as "radical left politics" which is constituted of radical left parties that reject the socio-economic structures of contemporary society that are based on the principles and values of capitalism.[2]

Far-left politics is seen as radical because it calls for fundamental change to the capitalist socio-economic structure of society.[3] March and Mudde claim that far-left parties are an increasingly stabilized political actor and are challenging mainstream social democratic parties. They further define other core characteristics of far-left politics as being internationalism and a focus on networking and solidarity as well as opposition to globalization and neoliberalism.[3] 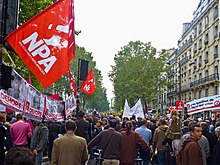 In Europe, the support for far-left politics comes from three overlapping groups, namely far-left subcultures, disaffected social democrats and protest voters—those who are opposed to their country's European Union membership.[4]

Others classify the far-left under the category of populist socialist parties.[6] Some such as Professor Vít Hloušek and Professor Lubomír Kopeček of the Masaryk University at the International Institute of Political Science suggest secondary characteristics, including anti-Americanism, anti-globalization, opposition to NATO and in some cases a rejection of European integration.[7]

Luke March states that "compared with the international communist movement 30 years ago, the far left has undergone a process of profound de-radicalisation. The extreme left is marginal in most places". March identifies four major subgroups within contemporary European far-left politics, namely communists, democratic socialists, populist socialists and social populists.[8] In Radical Left Parties in Europe (2012), March writes: "I prefer the term 'radical left' to alternatives such as 'hard left' and 'far left', which can appear pejorative and imply that the left is necessarily marginal". According to March, the most successful far-left parties are "pragmatic and non-ideological".[9] 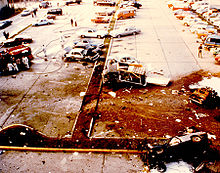 Many far-left militant organizations were formed by members of existing political parties in the 1960s and 1970s[10] such as the Montoneros, the Red Army Faction and the Red Brigades.[11][12][13] These groups generally aim to overthrow capitalism and the wealthy ruling classes.[14]