Faiyum Governorate (Arabic: محافظة الفيوم‎ Muḥāfāzah Al Fayyūm) is one of the governorates of Egypt in the middle of the country. Its capital is the city of Faiyum, located about 81 mi (130 km) south west of Cairo. It has a population of 3,072,181 (2014).[4]

The name Faiyum comes from Coptic  ̀Ⲫⲓⲟⲙ /Ⲡⲉⲓⲟⲙ efiom/peiom (whence the proper name Ⲡⲁⲓⲟⲙ payoum), meaning the Sea or the Lake, which in turn comes from late Egyptian pA y-m of the same meaning, a reference to the nearby Lake Moeris.

The rate of poverty is more than 60% in this governorate but recently some social safety networks have been provided in the form of financial assistance and job opportunities. The funding has been coordinated by the country's Ministry of Finance and with assistance from international organizations.[5]

The governorate is divided into the following municipal divisions for administrative purposes, with a total estimated population as of July 2017 of 3,615,486. In some instances there is a markaz and a kism with the same name.[6][7] 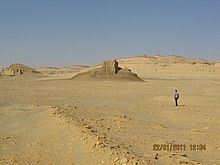 The governorate of Faiyum includes: 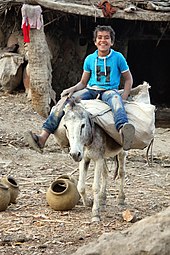 Boy of Nazla, one of the pottery production sites at Faiyum

According to the Egyptian Governing Authority for Investment and Free Zones (GAFI), in affiliation with the Ministry of Investment (MOI), the following industrial zones are located in this governorate:[10]