The FIFA Confederations Cup was an international association football tournament for men's national teams, held every four years by FIFA. It was contested by the holders of each of the six continental championships (AFC, CAF, CONCACAF, CONMEBOL, OFC and UEFA), along with the current FIFA World Cup holder and the host nation, to bring the number of teams up to eight.

Between 2001 and 2017 (with an exception of 2003), the tournament was held in the country that would host the World Cup next year, acting as a test event for the larger tournament.

The last champions were Germany, who won the 2017 FIFA Confederations Cup by defeating Chile 1–0 in the final to win their only title.

In March 2019, FIFA confirmed that the tournament would no longer be staged, with its slot replaced by an expansion of the FIFA Club World Cup in 2021.[1]

The tournament was originally organized by and held in Saudi Arabia, contested in 1992 and 1995 by the Saudi national side and some continental champions. Disputed as the King Fahd Cup (Confederations Winners Cup or Intercontinental Championship), in honor of the then Saudi ruler who organized the tournament with his country's federation, (thus in the form of an unofficial tournament).[2]

In 1997, FIFA took over the organization of the tournament, named it the FIFA Confederations Cup and staged the competition every two years and recognized the first two editions in 1997.[3]

After 2005, it was held every four years, in the year prior to each World Cup in the host country of the forthcoming World Cup (the 2001 edition was hosted in South Korea and Japan, before the quadrennial pattern was established). Considered a dress-rehearsal for the World Cup it precedes, it used around half of the stadiums intended for use at the following year's competition and gave the host nation, which qualified for that tournament automatically, experience at a high level of competition during two years of otherwise friendlies. At the same time, participation was made optional for the South American and European champions.[4] 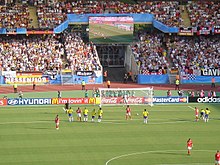 Germany against Brazil in the Frankenstadion in Nuremberg, Germany in the 2005 FIFA Confederations Cup

Generally, the host nation, the World Cup holders, and the six continental champions qualified for the competition. In those cases where a team meets more than one of the qualification criteria (such as the 2001 tournament where France qualified as the World Cup champions and European champions), another team was invited to participate, often the runner-up in a competition that the extra-qualified team won.[citation needed]

On four occasions teams have chosen not to participate in the tournament. Germany did so twice, in 1997 (replaced by Euro 1996 runners-up Czech Republic) and in 2003 when Germany were awarded a place as the 2002 World Cup runners-up, replaced by the third-placed team Turkey. World champions France declined a place in the 1999 Confederations Cup, replaced by Brazil, the 1998 World Cup runners-up. Italy, UEFA Euro 2000 runners up, declined their place in the 2003 FIFA Confederations Cup.[citation needed]

An earlier tournament that invited former World Cup winners, the Mundialito, celebrated the fiftieth anniversary of the first World Cup. The Artemio Franchi Trophy, contested in 1985 and 1993 between the winners of the Copa América and UEFA European Football Championship, was another example of an earlier contest between football confederations. Both of these are considered by some to be a form of unofficial precursor to the Confederations Cup, although FIFA recognised only the 1992 tournaments onwards to be Confederations Cup winners.[5]

The 2021 tournament was originally to be held in Qatar, the host country of the 2022 FIFA World Cup, as announced on 2 December 2010 after the country was awarded the hosting rights of the 2022 FIFA World Cup. However, concerns arose surrounding Qatar's high temperatures during the summer period (which also led to calls for the World Cup to be moved from its traditional June–July scheduling to November–December).[6]

On 25 February 2015, this resulted in FIFA officially announcing that it would move the 2021 Confederations Cup to another country of the Asian Football Confederation, so it could still be held during the traditional window of June/July 2021, without interrupting domestic leagues. As compensation, another FIFA tournament, potentially the 2021 FIFA Club World Cup, could be held in Qatar in November–December 2021, as the test event for the 2022 World Cup.[7][8]

The eight qualified teams were drawn into two round-robin groups: two teams from the same confederation could not be drawn in a group, except if there were three teams from the same confederation (something that only happened in the 2017 edition when hosts Russia were joined by World Cup champions Germany and European champions Portugal). Every team played all other teams in their group once, for three matches.

The top two teams of each group advanced to the semi-finals, with the winners of each group playing the runners-up of the other group. The rankings of teams in each group were determined as follows (regulations Article 19.6):

If two or more teams were equal on the basis of the above three criteria, their rankings were determined as follows:

The winners of the semi-finals advanced to the final, while the losers played in the third-place game. For the knockout stage if the score was drawn at the end of regular time, extra time was played (two periods of 15 minutes each) and followed, if necessary, by a penalty shoot-out to determine the winner.