The Fédération des travailleurs et travailleuses du Québec (FTQ; Quebec Federation of Labour) is the largest labour federation in Quebec in terms of its membership. It has over 500,000 members, who account for 44% of the unionised workers in Quebec. This ratio is 60% in the private sector, in which most members work. It also has many members in government agencies. 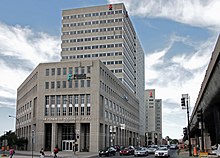 The FTQ Complex in Montreal

It was created in 1957 out of two very old unions, the Fédération provinciale du travail du Québec (Quebec Provincial Labour Federation) and the Fédération des unions industrielles du Québec (Federation of Quebec Industrial Unions), and was mostly developed under the presidency of Louis Laberge from 1964 to 1991 with help from American unions that were afraid of seeing industry relocated in Canada.

Michel Arsenault is the federation’s current president and René Roy is its secretary.

The FTQ is unusual among labour unions in that it founded (in 1983) and controls a capital investment fund called "Fonds de solidarité FTQ" which it uses to collaborate with and influence industrial groups and to promote economic growth. In November 2006 its investment fund stood at more than $6.8 billion.

The FTQ endorsed the Parti Québécois for the 2007 Quebec election, but criticized their call for a new referendum.