The Fédération aéronautique internationale (French: [fedeʁɑsjɔ̃ aeʁɔnotik ɛ̃tɛʁnasjɔnal]; FAI; English: World Air Sports Federation), is the world governing body for air sports, and also stewards definitions regarding human spaceflight. It was founded on 14 October 1905, and is headquartered in Lausanne, Switzerland.[3] It maintains world records for aeronautical activities including ballooning, aeromodeling, unmanned aerial vehicles (drones), as well as flights into space.

The FAI was founded at a conference held in Paris 12–14 October 1905, which was organised following a resolution passed by the Olympic Congress held in Brussels on 10 June 1905 calling for the creation of an Association "to regulate the sport of flying, ... the various aviation meetings and advance the science and sport of Aeronautics."[4] The conference was attended by representatives from 8 countries: Belgium (Aero Club Royal de Belgique, founded 1901), France (Aéro-Club de France, 1898), Germany (Deutscher Aero Club e.V.), Great Britain (Royal Aero Club, 1901), Italy (Aero Club d'Italia, 1904), Spain (Real Aero Club de España, 1905), Switzerland (Aero-Club der Schweiz, 1900) and the United States (Aero Club of America, 1905).

The FAI is the international governing body for the following activities:

The FAI establishes the standards for records in the activities. Where these are air sports, the FAI also oversees international competitions at world and continental levels, and also organizes the World Air Games and FAI World Grand Prix.

The FAI organises the FAI International Drones Conference and Expo. This event offers a platform for organisations, businesses and individuals to discuss how drones are used today and to create a framework for how they will be used and impact on life in the future.

The FAI defines the limit between Earth's atmosphere and outer space, the so-called Karman Line, as the altitude of 100 kilometres (62 miles; 330,000 feet) above Earth's sea level.[18] 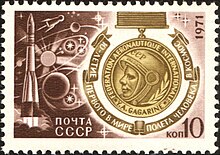 Among the FAI's responsibilities are the verification of record-breaking flights. For a flight to be registered as a "World Record," it has to comply with the FAI's strict rules, which include a proviso that the record must exceed the previous record by a certain percentage. Since the late 1930s, military aircraft have dominated some classes of record for powered aircraft such as speed, distance, payload, and height, though other classes are regularly claimed by civilians.

Some records are claimed by countries as their own, even though their achievements fail to meet FAI standards. These claims are not typically granted the status of official records. For example, Yuri Gagarin earned recognition for the first manned spaceflight, despite failing to meet FAI requirements. The FAI initially did not recognize the achievement because he did not land in his Vostok spacecraft (he ejected from it), but later it recognized that Gagarin was the first human to fly into space. The FAI then established "The Yuri A. Gagarin Gold Medal", which has been awarded since 1968.[19]

The following types of craft have records:

Some of the records

The FAI Gold Air Medal was established in 1924 and was first awarded in 1925. It is reserved for those who have contributed greatly to the development of aeronautics by their activities, work, achievements, initiative or devotion to the cause of Aviation. The FAI has also awarded the Paul Tissandier Diploma since 1952 to those who have served the cause of aviation in general and sporting aviation in particular.[19] 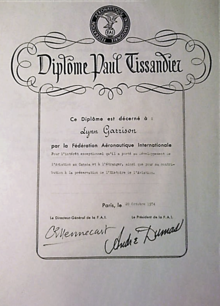 The FAI also makes awards for each of the following air sports.

The FAI Young Artists Contest[34] is an international painting competition for youngsters between the ages of 6 and 17. Each FAI Member Country organises the contest in their country, and the national winners are submitted to the International Jury each year.