Extreme weather or extreme climate events includes unexpected, unusual, severe, or unseasonal weather; weather at the extremes of the historical distribution—the range that has been seen in the past.[1] Often, extreme events are based on a location's recorded weather history and defined as lying in the most unusual ten percent.[2]

In recent years, growing evidence suggests that human-induced global warming is increasing the periodicity and intensity of some extreme weather events.[3][4][5][6][7] Confidence in the attribution of extreme weather and other events to anthropocentric climate change is highest in changes in frequency or magnitude of extreme heat and cold events with some confidence in increases in heavy precipitation and increases in intensity of droughts.[8]

Extreme weather has significant impacts on human society as well natural ecosystems. For example, global insurer Munich Re estimates that natural disasters cause more than $90 billion global direct losses in 2015.[9]

Early research in extreme weather focused on statements about predicting certain events, contemporary research has focused more on attribution of causes to trends in events.[9] In particular the field is focusing on human-induced global warming alongside other causal factors for these events.[9]

Definitions of extreme weather vary in different parts of the scientific community, changing the outcomes of research from those fields.[9] Generally speaking, one event in extreme weather cannot be attributed to any one cause; however, certain system wide changes to global weather systems can lead to increased frequency or intensity of extreme weather events.[9]

A 2016 report from the National Academies of Sciences, Engineering, and Medicine, recommended investing in improved shared practices across the field working on attribution research, improving the connection between research outcomes and weather forecasting.[8]

Changes in the frequency and type of extreme weather over long windows of time can be attributed to natural variability.

In general, climate models show that with climate change, the planet will experience more extreme weather.[10] In particular, temperature record highs outpaced record lows consistently from the 1980s through the 2000s and extreme weather types such as extreme heat, intense precipitation, and drought became more frequent or severe during these decades.[11][when?] As of 2016, confidence in the attribution of specific extreme weather events to anthropocentric climate change is highest in changes in frequency of extreme heat and cold events, increases in heavy precipitation, and increases in droughts.[8]

Some studies assert a connection between rapidly warming arctic temperatures and thus a vanishing cryosphere to extreme weather in mid-latitudes.[12][13][14][15] 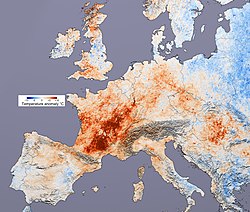 Heat waves are periods of abnormally high temperatures and heat index. Definitions of a heatwave vary because of the variation of temperatures in different geographic locations.[16] Excessive heat is often accompanied by high levels of humidity, but can also be catastrophically dry.[17]

Because heat waves are not visible as other forms of severe weather are, like hurricanes, tornadoes, and thunderstorms, they are one of the less known forms of extreme weather.[18] Severe heat weather can damage populations and crops due to potential dehydration or hyperthermia, heat cramps, heat expansion and heat stroke. Dried soils are more susceptible to erosion, decreasing lands available for agriculture. Outbreaks of wildfires can increase in frequency as dry vegetation has increased likeliness of igniting. The evaporation of bodies of water can be devastating to marine populations, decreasing the size of the habitats available as well as the amount of nutrition present within the waters. Livestock and other animal populations may decline as well.

During excessive heat plants shut their leaf pores (stomata), a protective mechanism to conserve water but also curtails plants' absorption capabilities. This leaves more pollution and ozone in the air, which leads to higher mortality in the population. It has been estimated that extra pollution during the hot summer 2006 in the UK, cost 460 lives.[19] The European heat waves from summer 2003 are estimated to have caused 30,000 excess deaths, due to heat stress and air pollution.[20] Over 200 U.S cities have registered new record high temperatures.[21] The worst heat wave in the USA occurred in 1936 and killed more than 5000 people directly. The worst heat wave in Australia occurred in 1938–39 and killed 438. The second worst was in 1896. 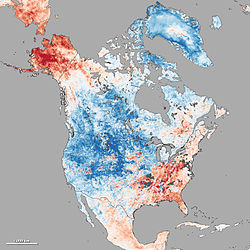 A cold wave is a weather phenomenon that is distinguished by a cooling of the air. Specifically, as used by the U.S. National Weather Service, a cold wave is a rapid fall in temperature within a 24-hour period requiring substantially increased protection to agriculture, industry, commerce, and social activities. The precise criterion for a cold wave is determined by the rate at which the temperature falls, and the minimum to which it falls. This minimum temperature is dependent on the geographical region and time of year.[24] Cold waves generally are capable of occurring any geological location and are formed by large cool air masses that accumulate over certain regions, caused by movements of air streams.[16]

A cold wave can cause death and injury to livestock and wildlife. Exposure to cold mandates greater caloric intake for all animals, including humans, and if a cold wave is accompanied by heavy and persistent snow, grazing animals may be unable to reach necessary food and water, and die of hypothermia or starvation. Cold waves often necessitate the purchase of fodder for livestock at considerable cost to farmers.[16] Human populations can be inflicted with frostbites when exposed for extended periods of time to cold and may result in the loss of limbs or damage to internal organs.

Cold waves that bring unexpected freezes and frosts during the growing season in mid-latitude zones can kill plants during the early and most vulnerable stages of growth. This results in crop failure as plants are killed before they can be harvested economically. Such cold waves have caused famines. Cold waves can also cause soil particles to harden and freeze, making it harder for plants and vegetation to grow within these areas. One extreme was the so-called Year Without a Summer of 1816, one of several years during the 1810s in which numerous crops failed during freakish summer cold snaps after volcanic eruptions reduced incoming sunlight. 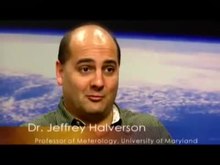 There has been long ongoing debate about a possible increase of tropical cyclones as an effect of global warming.[25] However, the 2012 IPCC special report on extreme events SREX states that "there is low confidence in any observed long-term (i.e., 40 years or more) increases in tropical cyclone activity (i.e., intensity, frequency, duration), after accounting for past changes in observing capabilities." [26] Increases in population densities increase the number of people affected and damage caused by an event of given severity. The World Meteorological Organization[27] and the U.S. Environmental Protection Agency[28] have in the past linked increasing extreme weather events to global warming, as have Hoyos et al. (2006), writing that the increasing number of category 4 and 5 hurricanes is directly linked to increasing temperatures.[29] Similarly, Kerry Emanuel in Nature writes that hurricane power dissipation is highly correlated with temperature, reflecting global warming.[30]

Hurricane modeling has produced similar results, finding that hurricanes, simulated under warmer, high CO2 conditions, are more intense than under present-day conditions. Thomas Knutson and Robert E. Tuleya of the NOAA stated in 2004 that warming-induced by greenhouse gas may lead to the increasing occurrence of highly destructive category-5 storms.[31] Vecchi and Soden find that wind shear, the increase of which acts to inhibit tropical cyclones, also changes in model-projections of global warming. There are projected increases of wind shear in the tropical Atlantic and East Pacific associated with the deceleration of the Walker circulation, as well as decreases of wind shear in the western and central Pacific.[32] The study does not make claims about the net effect on Atlantic and East Pacific hurricanes of the warming and moistening atmospheres, and the model-projected increases in Atlantic wind shear.[33]

A tornado that struck Anadarko, Oklahoma during a tornado outbreak in 1999

According to IPCC (2011) estimates of annual losses have ranged since 1980 from a few billion to above US$200 billion (in 2010 dollars), with the highest value for 2005 (the year of Hurricane Katrina).[36] The global weather-related disaster losses, such as loss of human lives, cultural heritage, and ecosystem services, are difficult to value and monetize, and thus they are poorly reflected in estimates of losses.[37][38] Yet, recent abnormally intense storms, hurricanes, floods, heatwaves, droughts and associated large-scale wildfires have led to unprecedented negative ecological consequences for tropical forests and coral reefs around the world.[39]