Expulsion of Asians from Uganda

Expelled Asians in the Netherlands after leaving Uganda, 1972
Expulsion of a racial group

In early August 1972, the President of Uganda, Idi Amin, ordered the expulsion of his country's Asian minority, giving them 90 days to leave the country.[1] At the time of the expulsion, there were approximately 80,000 individuals of Indian descent (mostly Gujaratis[2][3]) in Uganda, of whom 23,000 had their applications for citizenship both processed and accepted.[4] Although the latter were ultimately exempted from the expulsion, many chose to leave voluntarily.[5] The expulsion took place against a backdrop of Indophobia in Uganda, with Amin accusing a minority of the Asian population of disloyalty, non-integration and commercial malpractice, claims Indian leaders disputed.[4] Amin defended the expulsion by arguing that he was "giving Uganda back to ethnic Ugandans".[5]

Many of the expellees were citizens of the United Kingdom and Colonies and 27,200 subsequently emigrated to the United Kingdom. Of the other refugees who were accounted for; 6,000 went to Canada, 4,500 refugees ended up in India and 2,500 went to nearby Kenya.[5] In total, some 5,655 firms, ranches, farms, and agricultural estates were reallocated, along with cars, homes and other household goods.[5]

The presence of South Asians in Uganda was the result of deliberate choices by the British administration (1894–1962).[6] They were brought to the Uganda Protectorate by the British to "serve as a buffer between Europeans and Africans in the middle rungs of commerce and administration".[5] In addition, in the 1890s, 32,000 labourers from British India were brought to Southeast Africa under indentured labour contracts to work on the construction of the Uganda Railway.[7] Most of the surviving Indians returned home, but 6,724 individuals decided to remain in the African Great Lakes after the line's completion.[8] At the time of the expulsion, there were approximately 80,000 individuals of South Asian descent in Uganda, of whom 23,000 had had their applications for citizenship both processed and accepted.[4] A further 50,000 were British passport holders,[1] though Amin himself used the apparently exaggerated figure of 80,000 British passport holders in his initial expulsion speech.[4]

The British had invested in the education of the Asian minority, in preference to that of indigenous Ugandans.[6] By the early 1970s, many Indians in Southeast Africa and Uganda were employed in the sartorial and banking businesses[9] and Indophobia was already engrained by the start of Amin's rule in February 1971.[4] While not all Ugandan Asians were well off, they were on average better off than the indigenous communities,[4] constituting 1% of the population while receiving a fifth of the national income.[3] Indians were stereotyped as "merely traders" and labelled as "dukawallas" (an occupational term that degenerated into an anti-Indian slur during Amin's time[8]), who tried to cheat unsuspecting purchasers and looked out only for their own families.[10] Conversely, it was "not unusual to find that Indians possessed attitudes of superiority and negative pictures of the ability and efficiency of Africans".[10] Racial segregation was institutionalised.[10] Gated ethnic communities served elite healthcare and schooling services. Additionally, the tariff system in Uganda had historically been oriented toward the economic interests of South Asian traders.[11]

Milton Obote's government had pursued a policy of "Africanisation" which included policies targeted at Ugandan Asians. The 1968 Committee on the "Africanisation in Commerce and Industry", for example, had made far-reaching Indophobic proposals and a system of work permits and trade licenses was introduced in 1969 to restrict the role of non-citizen Indians in economic and professional activities. Nevertheless, Amin's policies represented a significant acceleration.[10] In August 1971, Amin announced a review of the citizenship status awarded to Uganda's Asian community, followed by the declaration of a census of Uganda's Asian population in October that year.[5][4] In order to resolve the "misunderstandings" regarding the role of Uganda's Asian minority in society, he then convened an Indian 'conference' for 7–8 December. In a memorandum presented on the second day of the conference, he set out his hope that "the wide gap" between Ugandan Asians and Africans would narrow.[4] While paying tribute to Indians' contribution to the economy and the professions, he accused a minority of the Asian population of disloyalty, non-integration and commercial malpractice, claims Indian leaders disputed.[4] On the vexed question of citizenship, he said his government would recognise citizenship rights already granted, but all outstanding applications for citizenship (which by this point were thought to number more than 12,000) would be cancelled.[4]

This expulsion of an ethnic minority was not the first in Uganda's history as the country's Kenyan minority, numbering approximately 30,000, had been expelled in 1969–70.[5][12] 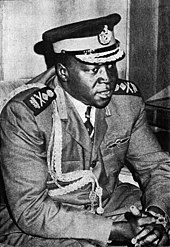 On 4 August 1972, Amin declared that Britain would need to take on responsibility for British subjects of Asian origin,[5] accusing them of "sabotaging Uganda's economy and encouraging corruption".[4] The deadline for British subjects to leave was confirmed as three months, which came to mean 8 November. On 9 August, the policy was expanded to include citizens of India, Pakistan and Bangladesh.[5] The position of the 23,000 Asians who had been granted Ugandan citizenship (and in particular those who held no other citizenship) was less clear. Not originally included, on 19 August, they were seemingly added to the list, before being re-exempted three days later following international protest. Many chose to leave rather than endure further intimidation, with only 4,000 known to have stayed.[5] Exemptions for certain professions were added, then later removed.[5][4]

The precise motivation for the expulsion remains unclear. Some of his former supporters suggest that it followed a dream in which, he claimed, Allah had told him to expel them, as well as plot vengeance against the British government for refusing to provide him with arms to invade Tanzania.[13] Although it is not confirmed, there was a rumour circulating around the Ugandan Asians that Amin fell in love with a married Indian woman. Her family sent her away to India to get away from him and this made Amin so angry that he wanted to expel every Indian from the country in retaliation. Amin defended the expulsion by arguing that he was giving Uganda back to the ethnic Ugandans:

We are determined to make the ordinary Ugandan master of his own destiny, and above all to see that he enjoys the wealth of his country. Our deliberate policy is to transfer the economic control of Uganda into the hands of Ugandans, for the first time in our country's history.

Ugandan soldiers during this period engaged in theft and physical and sexual violence against the Asians with impunity.[14] Restrictions were imposed on the sale or transfer of private businesses by Ugandan Asians and on 16 August Amin made it clear that after he was done with Indian-owned business, European-owned businesses would be next.[4]

The Asians only milked the cow, but they did not feed it to yield more milk.
There are now Black faces in every shop and industry. All the big cars in Uganda are now driven by Africans, and not the former bloodsuckers. The rest of Africa can learn from us.

Amin's decrees drew immediate worldwide condemnation, including from India. The Indian government warned Uganda of dire consequences, but took no action when Amin's government ignored the ultimatum.[16] India continued to maintain diplomatic ties with Uganda.[17] The United Kingdom froze a £10.4 million loan which had been arranged the previous year; Amin simply shrugged this off.[4]

Many of the Indians were citizens of the United Kingdom and Colonies and 27,200 refugees subsequently emigrated to the United Kingdom. Of the other refugees who were accounted for, 6,000 went to Canada, 4,500 ended up in India and 2,500 went to nearby Kenya. Malawi, Pakistan, West Germany and the United States took 1,000 refugees each, with smaller numbers emigrating to Australia, Austria, Sweden, Norway, Mauritius and New Zealand. About 20,000 refugees were unaccounted for.[5][18] Only a few hundred remained behind.[4] Reluctant to expand its newly introduced immigration quota, the British government had sought agreement from its British overseas territories to resettle them; however, only the Falkland Islands responded positively.[19] Kenya and Tanzania similarly closed their borders with Uganda to prevent an influx of refugees.[4]

Most of those expelled were Nizari Ismaili Muslims. The Aga Khan, the Imam of Nizari Ismailis phoned his long-time friend Canadian Prime Minister Pierre Trudeau. Trudeau's government agreed to allow thousands of Nizari Ismailis to emigrate to Canada.[20] The exodus of Ugandan Asians took on a new level of urgency in the September following a telegram from Amin to the UN Secretary General Kurt Waldheim, in which it appeared that Amin was sympathetic to Hitler's treatment of Jews and an airlift was organised.[4] The UN dispatched the Executive Secretary of the Economic Commission for Africa, Robert K. A. Gardiner, who attempted in vain to convince Amin to reverse his decision.[21]

Before the expulsion, Asians owned many large businesses in Uganda but the purge of Asians from Uganda's economy was virtually total. In total, some 5,655 firms, ranches, farms, and agricultural estates were reallocated, along with cars, homes and other household goods.[5] For political reasons, most (5,443) were reallocated to individuals, with 176 going to government bodies, 33 being reallocated to semi-state organisations and 2 going to charities. Possibly the biggest winner was the state-owned Uganda Development Corporation, which gained control over some of the largest enterprises, though both the rapid nature of the growth and the sudden lack of experienced technicians and managers proved a challenge for the corporation, resulting in a restructuring of the sector in 1974–5.[5] "The Ugandan economy fell deep into a crisis under the strain of civil wars, the nationalization of certain industries and the expulsion of the Asians... By 1987, President Yoweri Museveni had inherited an economy that suffered the poorest growth rate in Africa."[22]

Thousands of Indians returned to Uganda starting in 1986 when Yoweri Museveni assumed power. Museveni criticized Idi Amin's policies and invited the Indians to return.[23][3] According to Museveni, "Gujaratis have played a lead role in Uganda's social and industrial development. I knew that this community can do wonders for my country and they have been doing it for last many decades." The Indians resurfacing in Uganda have helped rebuild the economy of East Africa, and are financially well settled.[3][24]