Expo 2010, officially the Expo 2010 Shanghai China, was held on both banks of the Huangpu River in Shanghai, China, from 1 May to 31 October 2010. It was a major World Expo registered by the Bureau International des Expositions (BIE), in the tradition of international fairs and expositions, the first since 2005.[1] The theme of the exposition was "Better City – Better Life" and signifies Shanghai's new status in the 21st century as the "next great world city".[2] The Expo emblem features the Chinese character 世 ('world', Chinese "shì") modified to represent three people together with the 2010 date. It had the largest number of countries participating and was the most expensive Expo in the history of the world's fairs. The Shanghai World Expo was also the largest World's Fair site ever at 5.28 square km.[3]

By the end of the expo, over 73 million people had visited – a record attendance – and 246 countries and international organizations had participated.[4] On 16 October 2010, the expo set a single-day record of over 1.03 million visitors.[5]

Shanghai has been one of the main cities envisioned to host the expos for some time. Many scholars have written about the possibility and made suggestions in books. Unofficial participation in fairs outside China have happened since 1851. In 1910, the Qing dynasty decided to host China's first fair with the 1910 Nanyang industrial exposition.[6]

Shanghai scored the highest in each of the four rounds of voting at the 132nd Meeting of the Bureau of International Expositions in Prince's Palace of Monaco, Monte Carlo, Monaco, with Yeosu, South Korea maintaining second place. Yeosu later won the bid to host Expo 2012, a three-month specialized world expo. 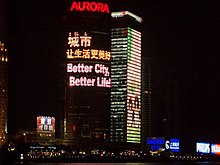 The site of the event was the Nanpu Bridge–Lupu Bridge region in the center of Shanghai along both sides of the Huangpu River. The area of the Expo 2010 covers 5.28 km2.[3]

After winning the bid to host the Expo in 2002, Shanghai began a monumental task to reshape the city. More than $48 billion [9] was spent for the preparation, more than the cost of cleaning up Beijing in the preparations for the Olympics in 2008. Shanghai began clearing 2.6 square kilometres along the Huangpu River; that involved moving 18,000 families and 270 factories, including the Jiang Nan Shipyard, which employs 10,000 workers.

Six new subway lines were opened between 2008 and 2010; four thousand brand new taxis were added in the month before Expo2010 opened and the city's buildings along the river were decorated with more energy-efficient LEDs.[citation needed]

During the expo, the expo site was crowded with national pavilions, sculpture gardens, shops, a sports arena and clam-shaped performing arts centre.[citation needed]

Main article: List of participants at the Expo Shanghai 2010

Flags of participating countries waving in front of the China pavilion.

192 countries and 50 organizations registered to participate in the Shanghai World Expo. A record number.[11]

Over 73 million people visited Expo 2010 during the 184-day event, breaking the previous record of 64 million visitors set by Expo 70 in Osaka. Organizers had expected 70 million visitors at the start of the expo. About 5.8 percent of the visitors, or 4.25 million, were foreigners.[12]

Shanghai spent 11.964 billion yuan in operating cost to host the event, making it the most expensive World Expo ever, but the organizers still made an operating profit of more than 1 billion yuan (US$157 million) thanks to the record attendance. The total revenue was 13.014 billion yuan, including 7.36 billion yuan in admission fees and almost 4 billion yuan in sponsorship income. However, the city invested another 19.74 billion yuan to prepare and construct the 5.28 square kilometer site, exceeding the budget of 18 billion yuan.[12]

The opening ceremony was held in the evening of 30 April 2010 attended by dozens of world leaders.[13] The ceremony consisted of an indoor and outdoor component. Jackie Chan, Lang Lang, and Andrea Bocelli were among the performers in the indoor component. The event featured an outdoor display of fireworks, lasers, and dancing fountains after a performance by singers and dancers.[14][15] The outdoor ceremony was produced by David Atkins Enterprises. 6,000 LED balls were floated into the Huangpu River representing fish. Organisers called the outdoor show "the largest searchlight display in history, the largest collection of multi-coloured laser firepower ever assembled in one place, the world’s largest LED screen, one of the largest dancing water fountains ever, and the “largest light show ever attempted”."[16] President Hu Jintao inaugurated the opening of the Shanghai World Expo.

About 20,000 performances were set to be staged between 1 May and 31 October in 2010, many singers present at the expo song writing and preparation process since 2008. Performers included Alan Tam, Gigi Leung, Stephanie Cheng, Khalil Fong, Hacken Lee, Denise Ho, Hins Cheung, Vincy Chan, Philadelphia Boys Choir, National Boys Choir of Australia, Salut Salon, the Cross Border Orchestra of Ireland and the Harvard Din & Tonics, and others.[18]

Haibao was the mascot of the Shanghai Expo 2010. It means treasure of the sea and was based on the Chinese character for man or person, "人". Some said that Haibao resembles Gumby,[22] but the expo's secretariat said that it was an original design chosen through a competition and that they had never heard of Gumby.[23] 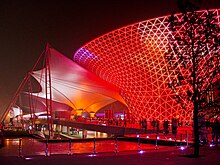 There were five central theme pavilions at the Expo 2010, exploring different aspects of urban development. They were called Urban Footprints, Urban Planet, Urbanian, City Being, and Urban Future.[26]

The Expo also included a pavilion for the Red Cross and Red Crescent and several others.

The Expo introduced numerous urban best practices and concepts from all over the world which the organisers hope will be a lasting legacy for better urban life in China and around the world. It advocated for future development to focus on environmental sustainability, efficiency and diversity. The innovations and achievements of the event were summarised in the Shanghai Declaration issued by the participants of the Expo. The declaration also nominated the Shanghai Expo’s closing day 31 October as "World Better Cities Day". United Nations Secretary-General Ban Ki-moon stated at the closing of the Expo, "Thanks to this Expo, millions of people learned about possibilities for making our cities healthier and safer, cities that better integrate nature and technology, cities that offer their citizens cleaner air and water, and better lives all around".[28]

Within Shanghai, the grounds of the former Expo site now constitute the Expo Park, including the former China Pavilion. The Bureau of International Expositions (BIE) and the Shanghai government have announced plans to construct the world's only official World Expo Museum in Shanghai, on the Puxi side of the expo site. Construction began in 2012, and the museum opened its doors on May 1, 2017.[29] More than 200 participants from Expo 2010 have donated over 30,000 exhibits to the future museum. The BIE has added into its formal requirements that all future Expo bidders shall support the new Expo Museum.[30]

The Shanghai Expo was touted by the Chinese government as yet another first-rate global scale event, similar in significance to the Beijing Olympics, which would symbolise the economic and political rise of China in the 21st century. The event would demonstrate to both the Chinese populace and foreign nations the enormous progress of China's urban development in the heart of the nation's economic hub of Shanghai. The event received extensive media coverage in the Chinese media both in the lead up and during the World Expo. According to China analyst Tom Doctoroff, “In terms of what the city was able to achieve, the Chinese were impressed. Shanghai stepped up a level in internationalization”.[31] Outside China, the Expo propelled Shanghai onto magazine covers, newspaper front pages and television programmes at a time when it is laying the groundwork to become an international financial centre by 2020.[32]

A group of NGOs protested a month before the expo against the alleged displacement of 18,000 families in the Shanghai area in connection with the Expo.[33] Dissident Feng Zhenghu was detained in mid April 2010 for threatening to publicly seek redress for them in the courts.[34] According to the U.S. government-run Congressional-Executive Commission on China, Shanghai authorities used the expo as an excuse to conduct a surveillance, propaganda, and detention campaign against members of the banned Falun Gong spiritual group.[35]

Denmark controversially sent the original Little Mermaid statue from Copenhagen to the expo, putting a video replica recorded by dissident Ai Weiwei in its place.[36] Some observers criticized the Hong Kong and Macao Affairs Office's payment for the 9 Hong Kong undersecretaries to inspect infrastructure projects and hold discussions on city-to-city cooperation.[37] Six legislators from the pro-democracy camp boycotted an invitation to the expo by the Shanghai government because of the issue of political reform and the 2010 Hong Kong by-election.[38] The Chinese government postponed the planned visit of 1,000 Japanese youths to the expo in September because of the 2010 Senkaku boat collision incident, which Japanese prime minister Naoto Kan called regrettable.[39]

State employees were given free one-day vouchers to the expo, and according to one worker, threatened with wage cuts, in order to fulfill the target of 70 million visitors.[40] Long lines at the Germany pavilion caused visitors to shout "Nazi, Nazi" and attack workers, according to general commissioner for Germany's pavilion Dietmar Schmitz.[41][42] Free tickets to an expo show featuring K-pop group Super Junior allegedly caused a stampede that injured 100 people, which spokespersons for the expo and the Korean pavilion denied.[43]