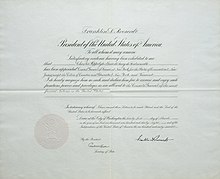 An exequatur is a legal document issued by a sovereign authority that permits the exercise or enforcement of a right within the jurisdiction of the authority. The word is a form of the Latin verb exequi, which denotes 'let it be executed'.

An exequatur is a patent which a head of state issues to a foreign consul, guaranteeing the consul's rights and privileges of office and ensuring recognition in the state to which the consul is appointed to exercise such powers. If a consul is not appointed by commission, the consul receives no exequatur; the government will usually provide some other means to recognize the consul. The exequatur may be withdrawn, but in practice, where a consul is obnoxious, an opportunity is afforded to his government to recall him.[1]

An exequatur is a legal instrument issued by secular authorities in Roman Catholic nations to guarantee the legal force of papal decrees within the jurisdiction of the secular authority. This custom began during the Western Schism, when the legitimately elected Supreme Pontiff permitted secular leaders to verify the authenticity of papal decrees before enforcing them.

Some dissidents[who?] in the church claim that the custom arose as an implication of the nature of secular authority over the church, and that such a state privilege to verify papal doctrine was exercised since the early days of the church. However, church doctrine denies that any permission from secular authority is necessary for papal decrees to be legally effective, even though secular authorities sometimes do not enforce them.[2]

In Brazilian, French, Luxembourg, Italian, Mexican, and Spanish law, an exequatur is a judgment of a tribunal (in the case of Italy, the Court of Appeal) that a decision issued by a foreign tribunal is to be executed in the jurisdiction of the former, thereby granting authority to the decision of the foreign tribunal as if it issued from the native tribunal.

In Puerto Rico, an exequatur is a document that validates a court order of a United States civil court as if a court of the Commonwealth of Puerto Rico issued it.[3]