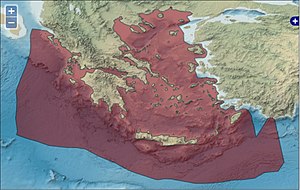 Greece forms the southernmost part of the Balkan peninsula in the Mediterranean Sea. It includes many small islands which vary between 1,200 and 6,000 in the Aegean Sea and the Ionian Sea.[2] The largest islands are Crete, Euboea, Lesbos, Rhodes and Chios. It is bordered to the north by Albania, to the east by Turkey, Cyprus, to the south by Egypt, Libya and to the west by Italy.

Turkey doesn't recognize a legal continental shelf and EEZ around the Greek islands.

According to published maps, the Government of Israel has recognized the EEZ of Greece and Cyprus. They describe the course of the gas pipeline which will transfer gas produced by American Νoble Εnergy Ltd. from the Leviathan reservoir to Europe, through an undersea pipeline crossing Greece. By this proposal, Israel recognizes the Greek EEZ in the area and offers an advantage that Greece can use during negotiation procedures to support its claims on the area. In practice, this cooperation will set up a powerful energy coalition between Greece, Cyprus and Israel. The mining and operating part will be undertaken by an American company.[3] "The substance of the issue is that in an effort to protect and secure vital Israeli interests in the Mediterranean Sea, Israel has been left with no choice other than to officially delimit its maritime borders".[4]

On 08 June 2020, Greece signed an agreement with Italy, establishing an EEZ between the two countries and resolving longstanding issues over fishing rights in the Ionian Sea. [5] On 06 August 2020, Greece signed an agreement with Egypt designating an EEZ in the Eastern Mediterranean between the two countries. [6] Both agreements are in line with Greece's claimed EEZ as per UNCLOS 1982 as well as customary international law.