Advertisement - You can get this game from STEAM
Plant that has leaves in all seasons
This article is about plant types. For other uses, see Evergreen (disambiguation). 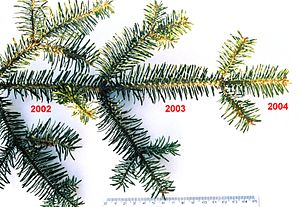 In botany, an evergreen is a plant that has leaves throughout the year and are always green. This is true even if the plant retains its foliage only in warm climates, and contrasts with deciduous plants, which completely lose their foliage during the winter or dry season

There are many different kinds of evergreen plants, both trees and shrubs. Evergreens include:

The Latin binomial term sempervirens, meaning "always green", refers to the evergreen nature of the plant, for instance

Leaf longevity in evergreen plants varies from a few months to several decades (over thirty years in the Great Basin Bristlecone Pine[1]).

Japanese umbrella pine is unique in that it has its own family of which it is the only species.

Differences between evergreen and deciduous species

Evergreen and deciduous species vary in a range of morphological and physiological characters. Generally, broad-leaved evergreen species have thicker leaves than deciduous species, with a larger volume of parenchyma and air spaces per unit leaf area.[2] They have larger leaf biomass per unit leaf area, and hence a lower specific leaf area. Construction costs do not differ between the groups. Evergreens have generally a larger fraction of total plant biomass present as leaves (LMF),[3] but they often have a lower rate of photosynthesis.

Reasons for being evergreen or deciduous 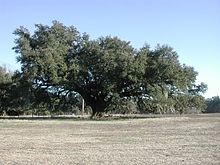 A southern live oak in South Carolina during winter

Deciduous trees shed their leaves, usually as an adaptation to a cold or dry/wet season. Evergreen trees do lose leaves, but each tree loses its leaves gradually and not all at once. Most tropical rainforest plants are considered to be evergreens, replacing their leaves gradually throughout the year as the leaves age and fall, whereas species growing in seasonally arid climates may be either evergreen or deciduous. Most warm temperate climate plants are also evergreen. In cool temperate climates, fewer plants are evergreen, with a predominance of conifers, as few evergreen broadleaf plants can tolerate severe cold below about −26 °C (−15 °F).

In areas where there is a reason for being deciduous, e.g. a cold season or dry season, being evergreen is usually an adaptation to low nutrient levels. Deciduous trees lose nutrients whenever they lose their leaves. In warmer areas, species such as some pines and cypresses grow on poor soils and disturbed ground. In Rhododendron, a genus with many broadleaf evergreens, several species grow in mature forests but are usually found on highly acidic soil where the nutrients are less available to plants. In taiga or boreal forests, it is too cold for the organic matter in the soil to decay rapidly, so the nutrients in the soil are less easily available to plants, thus favouring evergreens.

In temperate climates, evergreens can reinforce their own survival; evergreen leaf and needle litter has a higher carbon-nitrogen ratio than deciduous leaf litter, contributing to a higher soil acidity and lower soil nitrogen content. These conditions favour the growth of more evergreens and make it more difficult for deciduous plants to persist. In addition, the shelter provided by existing evergreen plants can make it easier for younger evergreen plants to survive cold and/or drought.[4][5][6]