A phase diagram for a fictitious binary chemical mixture (with the two components denoted by A and B) used to depict the eutectic composition, temperature, and point. (L denotes the liquid state.)

A eutectic system (/juːˈtɛktɪk/ yoo-TEK-tik)[1] from the Greek "εύ" (eu = well) and "τήξις" (tēxis = melting) is a homogeneous mixture of substances that melts or solidifies at a single temperature that is lower than the melting point of any of the constituents.[2]

The eutectic temperature is the lowest possible melting temperature over all of the mixing ratios for the involved component species.

Upon heating any other mixture ratio and reaching the eutectic temperature, one component's lattice will melt first, while the temperature of the mixture has to further increase for (all) the other component lattice(s) to melt. Conversely, as a non-eutectic mixture cools down, each mixture's component will solidify (form its lattice) at a distinct temperature, until all material is solid.

Not all binary alloys have eutectic points because the valence electrons of the component species are not always compatible,[clarification needed] in any mixing ratio, to form a new type of joint crystal lattice. For example, in the silver-gold system the melt temperature (liquidus) and freeze temperature (solidus) "meet at the pure element endpoints of the atomic ratio axis while slightly separating in the mixture region of this axis".[4]

The eutectic solidification is defined as follows:[6]

This type of reaction is an invariant reaction, because it is in thermal equilibrium; another way to define this is the change in Gibbs free energy equals zero. Tangibly, this means the liquid and two solid solutions all coexist at the same time and are in chemical equilibrium. There is also a thermal arrest for the duration of the change of phase during which the temperature of the system does not change.[6]

The resulting solid macrostructure from a eutectic reaction depends on a few factors. The most important factor is how the two solid solutions nucleate and grow. The most common structure is a lamellar structure, but other possible structures include rodlike, globular, and acicular.[7]

Eutectic alloys have two or more materials and have a eutectic composition. When a non-eutectic alloy solidifies, its components solidify at different temperatures, exhibiting a plastic melting range. Conversely, when a well-mixed, eutectic alloy melts, it does so at a single, sharp temperature. The various phase transformations that occur during the solidification of a particular alloy composition can be understood by drawing a vertical line from the liquid phase to the solid phase on the phase diagram for that alloy. 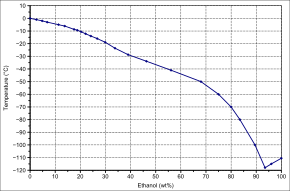 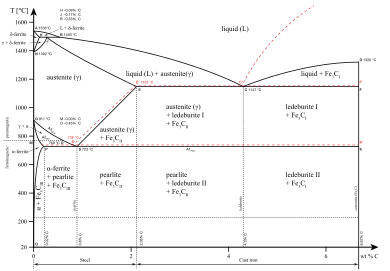 A peritectoid transformation is a type of isothermal reversible reaction that has two solid phases reacting with each other upon cooling of a binary, ternary, ...,

-ary alloy to create a completely different and single solid phase.[16] The reaction plays a key role in the order and decomposition of quasicrystalline phases in several alloy types.[17] A similar structural transition is also predicted for rotating columnar crystals. 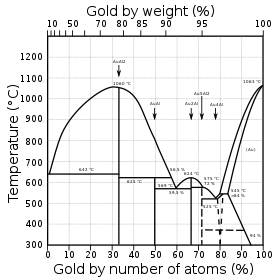 Peritectic transformations are also similar to eutectic reactions. Here, a liquid and solid phase of fixed proportions react at a fixed temperature to yield a single solid phase. Since the solid product forms at the interface between the two reactants, it can form a diffusion barrier and generally causes such reactions to proceed much more slowly than eutectic or eutectoid transformations. Because of this, when a peritectic composition solidifies it does not show the lamellar structure that is found with eutectic solidification.

Such a transformation exists in the iron-carbon system, as seen near the upper-left corner of the figure. It resembles an inverted eutectic, with the δ phase combining with the liquid to produce pure austenite at 1,495 °C (2,723 °F) and 0.17% carbon.

At the peritectic decomposition temperature the compound, rather than melting, decomposes into another solid compound and a liquid. The proportion of each is determined by the lever rule. In the Al-Au phase diagram, for example, it can be seen that only two of the phases melt congruently, AuAl2 and Au2Al , while the rest peritectically decompose.

The composition and temperature of a eutectic can be calculated from enthalpy and entropy of fusion of each components.[18]

The Gibbs free energy G depends on its own differential:

Thus, the G/T derivative at constant pressure is calculated by the following equation:

is calculated if we assume that the activity is equal to the concentration:

and an enthalpy of fusion

We obtain a relation that determines the molar fraction as a function of the temperature for each component:

The mixture of n components is described by the system

which can be solved by