The Eurovision Song Contest 2007 was the 52nd edition of the annual Eurovision Song Contest. It took place in Helsinki, Finland, following Lordi's win at the 2006 contest in Athens, Greece with the song "Hard Rock Hallelujah". It was the first time Finland had hosted the contest - 46 years after the country made its debut. Organised by the European Broadcasting Union (EBU) and host broadcaster Yleisradio (Yle), the contest was held at the Hartwall Areena, and consisted of a semi-final on 10 May, and the final on 12 May 2007. The two live shows were hosted by Jaana Pelkonen and Mikko Leppilampi. In addition, Krisse Salminen acted as guest host in the green room, and reported from the crowds at the Senate Square.

Forty-two countries participated in the contest - three more than the previous record of thirty-nine, that took part in 2005. The EBU decided to put aside its limit of 40 countries, which would have meant excluding some countries using a ranking order scheme.[2] The Czech Republic and Georgia made their first participation this year, with Montenegro and Serbia taking part as independent nations for the first time.[3] Austria and Hungary both returned, after their absence from the previous edition. Meanwhile, Monaco decided not to participate.[4]

The winner was Serbia with the song "Molitva", performed by Marija Šerifović and written by Vladimir Graić and Saša Milošević Mare. This was Serbia's first victory in the contest, and indeed, the first year they competed as an independent nation. Also, this was the first victory for one of the former Yugoslav republics. It was also the first winning song entirely performed in a country's native language since Israel's "Diva" in 1998. Ukraine, Russia, Turkey and Bulgaria rounded out the top five. Further down the table, Belarus achieved their best placing to date, finishing sixth. Meanwhile, Ireland achieved their worst placing in the contest, finishing twenty-fourth (last place). Of the "Big Four" countries Germany placed the highest, finishing nineteenth. 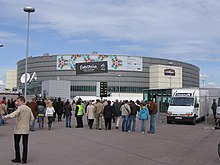 Helsinki, the Finnish capital, was chosen as the host city, although other cities were in the running; the second-largest city of Espoo, the third-largest city of Tampere, and the city of Turku all submitted bids to host the contest.

In the end, Helsinki was chosen, with the host venue being the Hartwall Areena. The venue is a large multi-functional indoor arena, which opened in 1997, and can take some 12,000-15,000 spectators for concerts. Its name comes from its largest sponsor, the beverage company Hartwall, also based in Helsinki. For the contest, the arena was referred to as the Helsinki Arena.

On 12 March 2007, the draws for the running order for the semi-final, final and voting procedure took place. A new feature allowed five wild-card countries from the semi-final and three countries from the final to choose their starting position. The heads of delegation went on stage and chose the number they would take. In the semi-final, Austria, Andorra, Turkey, Slovenia and Latvia were able to choose their positions. In the final, Armenia, Ukraine and Germany were able to exercise this privilege. All countries opted for spots in the second half of both evenings. Shortly after the draw, the entries were approved by the EBU, ending the possibility of disqualification for the Israeli song.[citation needed] The United Kingdom chose their entry after the deadline because they were granted special dispensation from the EBU.

The contest saw some minor changes to the voting time-frame. The compilation summary video of all entries including phone numbers was shown twice. The voting process was the same as 2006 except there was fifteen minutes to vote, an increase of five minutes on the 2006 Contest. In the final, the results from each country were once again shown from one to seven points automatically on screen and only eight, ten and twelve were read by the spokespeople. For the first time, the winner was awarded a promotion tour around Europe, visiting Denmark, Spain, Sweden, the Netherlands, Greece and Germany. The tour was held between 16 May and 21 May. The event was sponsored by Nordic communications group TeliaSonera, and — as with several previous contests — Nobel Biocare. Apocalyptica were the interval act, and played a medley of songs: Worlds Collide, Faraway and finally Life Burns!, but without the usual lyrics.

The official logo of the contest remained the same as 2006; the flag in the centre of the heart was changed to the Finnish flag. The European Broadcasting Union and YLE announced that the theme for the 2007 contest would be "True Fantasy", which embraced Finland and "Finnishness" in terms of the polarities associated with the country.[5] The design agency Dog Design was responsible for the design of the visual theme of the contest which incorporated vibrant kaleidoscopic patterns formed from various symbols including exclamation marks and the letter F.[6] The stage was in the shape of a kantele, a traditional Finnish instrument. On 20 February 2007 a reworked official website for the contest was launched marking the first public exhibition of this year's theme. An official CD and DVD were released (but no HD DVD or Blu-ray, despite the event being broadcast in high definition for the first time). An official fan book was also released. The themes of the postcards (short videos between the acts) were short stories happening in different Finnish places.

Participating countries in a Eurovision Song Contest must be active members of the EBU.

42 countries submitted preliminary applications. Although in previous years the maximum number of participating countries was 40, the EBU allowed all 42 to participate in 2007. The Czech Republic, Serbia, Montenegro and Georgia all entered the contest for the first time in 2007.[3] Monaco announced its non-participation on 12 December 2006,[4] and the EBU announced the final lineup of 42 countries on 15 December 2006.

Countries qualified for the final are highlighted.

1.^ Contained some words in French and Spanish.
2.^ Although the song was performed in English, the title and sentence in the lyrics "Ven a bailar conmigo" is in Spanish.

3.^ Contained some words in English.
4.^ Song is entirely in english but the title is in Greek.

All countries participating in the contest were required to use televoting and/or SMS voting during both evenings of the contest. In the event of technical difficulties, or if the votes of the country did not meet the EBU threshold, then a back-up jury's results were to be used. Albania and Andorra were the only countries that used juries. A draw was held in Helsinki to establish the order in which the countries presented their votes during the final.

Below is a summary of all 12 points in the semi-final:

Below is a summary of all 12 points in the final:

Organisation Générale des Amateurs de l'Eurovision (more commonly known as OGAE) is an international organisation that was founded in 1984 in Savonlinna, Finland by Jari-Pekka Koikkalainen.[10] The organisation consists of a network of 40 Eurovision Song Contest fan clubs across Europe and beyond, and is a non-governmental, non-political, and non-profitable company.[11] In what has become an annual tradition for the OGAE fan clubs, a voting poll was opened allowing members from different clubs around the world to vote for their favourite songs of the 2007 contest. Below is the top five overall results, after all the votes had been cast.[12]

The Barbara Dex Award has been annually awarded by the fan website House of Eurovision since 1997, and is a humorous award given to the worst dressed artist each year in the contest. It is named after the Belgian artist, Barbara Dex, who came last in the 1993 contest, in which she wore her own self designed (awful) dress.

The order in which each country announced their votes was determined in a draw during the heads of delegation meeting. The spokespersons are shown alongside each country.[13]

The commentators of the 42 participating countries are as follows:

The commentators of the non-participating countries are:

Eurovision Song Contest: Helsinki 2007 was the official compilation album of the 2007 Contest, put together by the European Broadcasting Union and released by CMC International on 20 April 2007. The album featured all 42 songs that entered in the 2007 contest, including the semi-finalists that failed to qualify into the grand final.[44]