European windstorms are powerful extratropical cyclones which form as cyclonic windstorms associated with areas of low atmospheric pressure. They can occur throughout the year, but are most frequent between October and March, with peak intensity in the winter months.[1] Deep areas of low pressure are common over the North Atlantic, and occasionally start as nor'easters off the New England coast. They frequently track across the North Atlantic Ocean towards the north of Scotland and into the Norwegian Sea, which generally minimizes the impact to inland areas; however, if the track is further south, it may cause adverse weather conditions across Central Europe, Northern Europe and especially Western Europe. The countries most commonly affected include the United Kingdom, Ireland, the Netherlands, Norway, the Faroe Islands and Iceland.[2]

The strong wind phenomena intrinsic to European windstorms, that give rise to "damage footprints" at the surface, can be placed into three categories, namely the "warm jet", the "cold jet" and the "sting jet". These phenomena vary in terms of physical mechanisms, atmospheric structure, spatial extent, duration, severity level, predictability and location relative to cyclone and fronts.[3] 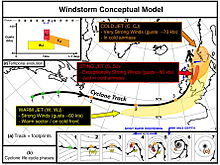 Conceptual model for a European Windstorm and the associated strong wind "footprints". Note that storm track, footprint locations and footprint sizes vary by case, and that all footprints are not always present.[3]

The state of the North Atlantic Oscillation relates strongly to the frequency, intensity, and tracks of European windstorms.[5] An enhanced number of storms have been noted over the North Atlantic region during positive NAO phases (compared to negative NAO phases) and is due to larger areas of suitable growth conditions. The occurrence of extreme North Atlantic cyclones is aligned with the NAO state during the cyclones' development phase.[6] The strongest storms are embedded within, and form in large scale atmospheric flow.[7] It should be kept in mind that, on the other hand, the cyclones themselves play a major role in steering the NAO phase.[6] Aggregate European windstorm losses show a strong dependence on NAO,[8] with losses increasing/decreasing 10-15% at all return periods.[8]

Temporal clustering of windstorm events has also been noted, with eight consecutive storms hitting Europe during the winter of 1989/90. Cyclone Lothar and Martin in 1999 were separated by only 36 hours. Cyclone Kyrill in 2007 followed only four days after Cyclone Per.[9][10] In November 2011, Cyclone Berit moved across Northern Europe, and just a day later another storm, named Yoda, hit the same area.

Up to the second half of the 19th century, European windstorms were named after the person who spotted them.[citation needed] Usually, they would be named either by the year, the date, the Saint's day of their occurrence[11] or any other way that made them commonly known.

An alternative Scottish naming system arose in 2011 via social media/Twitter which resulted in the humorous naming of Hurricane Bawbag[13][14][15] and Hurricane Fannybaws. Such usage of the term Hurricane is not without precedent, as the 1968 Scotland storm was referred to as "Hurricane Low Q".[16]

The UK Met Office and Ireland's Met Éireann held discussions about developing a common naming system for Atlantic storms.[17][18] In 2015 a pilot project by the two forecasters was launched as "Name our storms" which sought public participation in naming large-scale cyclonic windstorms affecting the UK and/or Ireland over the winter of 2015/16.[19][20] The UK/Ireland storm naming system began its first operational season in 2015/2016, with Storm Abigail.[21][circular reference] An independent forecaster, the European Windstorm Centre, also has its own naming list, although this is not an official list.[22]

During 1954, Karla Wege, a student at the Free University of Berlin's meteorological institute suggested that names should be assigned to all areas of low and high pressure that influenced the weather of Central Europe.[23] The university subsequently started to name every area of high or low pressure within its weather forecasts, from a list of 260 male and 260 female names submitted by its students.[23][24] The female names were assigned to areas of low pressure while male names were assigned to areas of high pressure.[23][24] The names were subsequently exclusively used by Berlin's media until February 1990, after which the German media started to commonly use the names, however, they were not officially approved by the German Meteorological Service Deutscher Wetterdienst.[23][25] The DWD subsequently banned the usage of the names by their offices during July 1991, after complaints had poured in about the naming system.[24] However, the order was leaked to the German press agency, Deutsche Presse-Agentur, who ran it as its lead weather story.[24] Germany's ZDF television channel subsequently ran a phone in poll on 17 July 1991 and claimed that 72% of the 40,000 responses favored keeping the names.[24] This made the DWD pause and think about the naming system and these days the DWD accept the naming system and request that it is maintained.[24][25]

During 1998 a debate started about if it was discrimination to name areas of high pressure with male names and the areas of low pressure with female names.[23] The issue was subsequently resolved by alternating male and female names each year.[23] In November 2002 the "Adopt-a-Vortex" scheme began, which allows members of the public or companies to buy naming rights for a letter chosen by the buyer that are then assigned alphabetically to high and low pressure areas in Europe during each year.[26] The naming comes with the slim chance that the system will be notable. The money raised by this is used by the meteorology department to maintain weather observations at the Free University.[27] 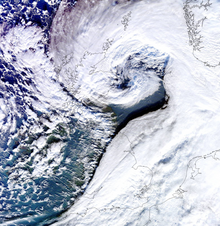 Several European languages use cognates of the word huracán (ouragan, uragano, orkan, huragan, orkaan, ураган, which may or may not be differentiated from tropical hurricanes in these languages) to indicate particularly strong cyclonic winds occurring in Europe. The term hurricane as applied to these storms is not in reference to the structurally different tropical cyclone of the same name, but to the hurricane strength of the wind on the Beaufort scale (winds ≥ 118 km/h or ≥ 73 mph).

In English, use of term hurricane to refer to European windstorms is mostly discouraged, as these storms do not display the structure of tropical storms. Likewise the use of the French term ouragan is similarly discouraged as hurricane is in English, as it is typically reserved for tropical storms only.[28][29] European windstorms in Latin Europe are generally referred to by derivatives of tempestas (tempest, tempête, tempestado, tempesta), meaning storm, weather, or season, from the Latin tempus, meaning time.[30]

Globally storms of this type forming between 30° and 60° latitude are known as extratropical cyclones. The name European windstorm reflects that these storms in Europe are primarily notable for their strong winds and associated damage, which can span several nations on the continent. The strongest cyclones are called windstorms within academia and the insurance industry.[2] The name European windstorm has not been adopted by the UK Met Office in broadcasts (though it is used in their academic research[31]), the media or by the general public, and appears to have gained currency in academic and insurance circles as a linguistic and terminologically neutral name for the phenomena.

In contrast to some other European nations there is a lack of a widely accepted name for these storms in English. The Met Office and UK media generally refer to these storms as severe gales.[32] The current definition of severe gales (which warrants the issue of a weather warning) are repeated gusts of 70 mph (110 km/h) or more over inland areas.[32] European windstorms are also described in forecasts variously as winter storms,[33] winter lows, autumnal lows, Atlantic lows and cyclonic systems.[citation needed] They are also sometimes referred to as bullseye isobars and dartboard lows in reference to their appearance on weather charts.[citation needed] A Royal Society exhibition has used the name European cyclones,[34] with North-Atlantic cyclone and North-Atlantic windstorms also being used.[2] Though with the advent of the "Name our Storms" project, they are generally known as storms. 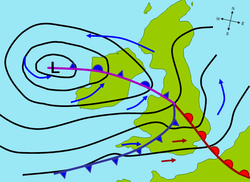 A fictitious synoptic chart of an extratropical cyclone affecting Great Britain & Ireland. The blue and red arrows between isobars indicate the direction of the wind and its relative temperature, while the "L" symbol denotes the center of the "low". Note the occluded cold and warm frontal boundaries.

Insurance losses from windstorms are the second greatest source of loss for any natural peril after Atlantic hurricanes in the United States.[35] Windstorm losses exceed those caused by flooding in Europe. For instance one windstorm, Kyrill in 2007, exceeded the losses of the 2007 United Kingdom floods.[36] On average, some 200,000 buildings are damaged by high winds in the UK every year.[37]

European windstorms wipe out electrical generation capacity across large areas, making supplementation from abroad difficult (windturbines shut down to avoid damage and nuclear capacity may shut if cooling water is contaminated or flooding of the power plant occurs). Transmission capabilities can also be severely limited if power lines are brought down by snow, ice or high winds. In the wake of Cyclone Gudrun in 2005 Denmark and Latvia had difficulty importing electricity,[38] and Sweden lost 25% of its total power capacity as the Ringhals Nuclear Power Plant and Barsebäck nuclear power plant nuclear plants were shut down.[39]

During the Boxing Day Storm of 1998 the reactors at Hunterston B nuclear power station were shut down when power was lost, possibly due to arcing at pylons caused by salt spray from the sea.[40] When the grid connection was restored, the generators that had powered the station during the blackout were shut down and left on "manual start", so when the power failed again the station was powered by batteries for a short time of around 30 minutes, until the diesel generators were started manually.[40] During this period the reactors were left without forced cooling, in a similar fashion to the Fukushima Daiichi nuclear disaster, but the event at Hunterston was rated as International Nuclear Event Scale 2.[40][41]

A year later in 1999 during the Lothar storm Flooding at the Blayais Nuclear Power Plant resulted in a "level 2" event on the International Nuclear Event Scale.[42] Cyclone Lothar and Martin in 1999 left 3.4 million customers in France without electricity, and forced EdF to acquire all the available portable power generators in Europe, with some even being brought in from Canada.[39] These storms brought a fourth of France's high-tension transmission lines down and 300 high-voltage transmission pylons were toppled. It was one of the greatest energy disruptions ever experienced by a modern developed country.[43]

Following the Great Storm of 1987 the High Voltage Cross-Channel Link between the UK and France was interrupted, and the storm caused a domino-effect of power outages throughout the Southeast of England.[44] Conversely windstorms can produce too much wind power. Cyclone Xynthia hit Europe in 2010, generating 19000 megawatts of electricity from Germany's 21000 wind turbines. The electricity produced was too much for consumers to use, and prices on the European Energy Exchange in Leipzig plummeted, which resulted in the grid operators having to pay over 18 euros per megawatt-hour to offload it, costing around half a million euros in total.[45]

Disruption of the gas supply during Cyclone Dagmar in 2011 left Royal Dutch Shell's Ormen Lange gas processing plant in Norway inoperable after its electricity was cut off by the storm. This left gas supplies in the United Kingdom vulnerable as this facility can supply up to 20 percent of the United Kingdom's needs via the Langeled pipeline. However, the disruption came at a time of low demand.[46] The same storm also saw the Leningrad Nuclear Power Plant also affected, as algae and mud stirred up by the storm were sucked into the cooling system, resulting in one of the generators being shut down.[47][48] A similar situation was reported in the wake of Storm Angus in 2016 (though not linked specifically to the storm) when reactor 1 at Torness Nuclear Power Station in Scotland was taken offline after a sea water intake tripped due to excess seaweed around the inlet.[49] Also following Storm Angus the UK's National Grid launched an investigation into whether a ship's anchor damaged four of the eight cables of the Cross Channel high voltage interconnector, which would leave it only able to operate at half of its capacity until February 2017.[50]

Contemporary picture of the flood that struck the North Sea coast of Germany and Denmark in October 1634.