The E67 near Bříství, Czech Republic 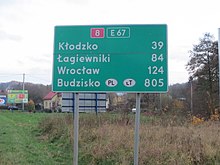 At the Northern beginning at the port of Tallinn.

European route E 67 is an E-road running from Prague in the Czech Republic to Helsinki in Finland by way of Poland, Lithuania, Latvia, and Estonia. It goes via Prague, Wrocław, Warsaw, Kaunas, Panevėžys, Riga, Tallinn and Helsinki.

It is known as the Via Baltica between Warsaw and Tallinn, a distance of 970 kilometres (600 mi). It is a significant road connection between the Baltic states. The final stretch between Tallinn and Helsinki is by ferry (with about 10 car ferry departures each direction per day[1]).

The route is mostly ordinary road, but there are plans to convert it into a motorway or expressway, in Poland called S8 (326 of 379 km completed as of 2015[update]) and S61 (19 of 235 km completed as of 2015[update]). Along the Via Baltica highway, the stretch of European route E67 between Warsaw and Tallinn, the 5G mobile network will be built in order to facilitate self-driving vehicles and expand opportunities for freight carriers.[2]

The Via Baltica attracted great controversy in 2007, as its planned new express road was to take it through several areas in Poland of great natural value. Most controversial was the Augustów bypass, which would take the route through the wetlands of the Rospuda Valley, the last area of its kind remaining in Europe,[citation needed] and an area protected by EU law as part of the European Natura 2000 Network. In July 2007 Polish Prime Minister Jarosław Kaczyński halted work on the bypass after the European Commission applied for an immediate injunction.[3] After an intense campaign of protests in Poland and abroad and also counter-protests of the local community, the plans have been changed, and now the highway has been rerouted to completely avoid the wilderness area.[4][5]