European route E65 is a north-south Class-A European route that begins in Malmö, Sweden and ends in Chania, Greece. The road is about 4,400 km (2,700 mi) in length. 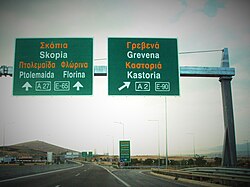 E65 (A27) near Kozani in Western Macedonia, Greece heading north

The route between Montenegro and Kosovo is unclear, a problem currently shared with E80 which is concurrent with E65 on this section. The existing magistral road that goes via Podgorica through the town of Bijelo Polje continues northwards through western Serbia as E763, away from the direction of Pristina. Instead the route needs to turn to the east some 5 km before Bijelo Polje (Ribarevina junction), and towards Priština. After that, at Rožaje, the route winds slightly northwards again, goes through western Serbia near Tutin, and then enters Kosovo near Kosovska Mitrovica.

^ Kosovo is the subject of a territorial dispute between the Republic of Kosovo and the Republic of Serbia. The Republic of Kosovo unilaterally declared independence on 17 February 2008, but Serbia continues to claim it as part of its own sovereign territory. The two governments began to normalise relations in 2013, as part of the 2013 Brussels Agreement. Kosovo is currently recognized as an independent state by 98 out of the 193 United Nations member states. In total, 113 UN member states recognized Kosovo at some point, of which 15 later withdrew their recognition.