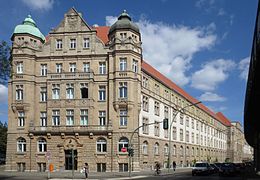 The European Patent Office (EPO) grants European patents for the Contracting States to the European Patent Convention. The EPO provides a single patent grant procedure, but not a single patent from the point of view of enforcement. Hence the patents granted are not European Union patents or even Europe-wide patents, but a bundle of national patents.[6] Besides granting European patents, the EPO is also in charge of establishing search reports for national patent applications on behalf of the patent offices of France, Netherlands, Belgium, Luxembourg, Italy, Turkey, Greece, Cyprus, Malta, San Marino, Lithuania, Latvia and Monaco.[9][10][11][12]

The EPO headquarters are located in Munich, Germany.[1] The EPO also has a branch in Rijswijk, The Netherlands, which is near The Hague[16][17], sub-offices in Berlin, Germany,[18] and Vienna, Austria, and a "liaison bureau" in Brussels, Belgium. At the end of 2009, the European Patent Office had a staff of 6818 (with 3718 based in Munich, 2710 in Rijswijk, 274 in Berlin, 112 in Vienna and 4 in Brussels).[19] The predecessor of the European Patent Office was the Institut International des Brevets or IIB.

More generally, the "management of the EPO is dominated by the delegates of the contracting States in the Administrative Council," these delegates being, according to Otto Bossung, primarily guided by their national interests rather than by supranational interests such as for instance the implementation of the EU internal market.[30] 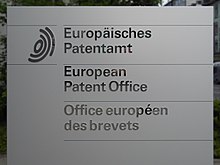 Signage at the Munich office of the European Patent Office, in its three official languages, German, English and French.

Some Contracting States to the European Patent Convention have an official language which is not an official language of the EPO, such as Dutch, Italian or Spanish. These languages are referred to as "admissible non-EPO languages".[34] Residents or nationals of such States may submit any documents subject to a time limit in an official language of that State[39] and there is a period of one month for filing a translation into an official language[40] or the document is deemed not to have been filed.[39] The filing fee and examination fee are reduced by 30% for certain categories of applicants, namely for small and medium-sized enterprises, natural persons, and "non-profit organisations, universities or public research organisations", when filing a patent application or an examination request in an admissible non-EPO language and subsequently, or at the earliest simultaneously, file the necessary translation.[34][41]

Branch of the EPO at The Hague, Netherlands[42] (more precisely at Rijswijk, a suburb of The Hague).

In practice, the above departments of European Patent Office are organized into three "Directorates-General" (DG) and a Boards of Appeal Unit. The three DG, each being directed by a Vice-President, are: DG Patent Granting Process, DG Corporate Services, and DG Legal and International Affairs.[44]

The European Patent Office does not make decisions on infringement matters. National courts have jurisdiction over infringement matters regarding European patents. Regarding the validity of European patents however, both the European Patent Office during opposition proceedings (Article 99 EPC) and national courts during nullity proceedings (Article 138 EPC) may decide to revoke a European patent. According to Sir Robin Jacob, the members of the EPO Boards of Appeal are "judges in all but name".[45]

Activities under the Patent Cooperation Treaty

As Supplementary International Searching Authority (SISA), the European Patent Office has announced that it will conduct no more than 700 supplementary international searches per year.[48]

Patents granted by EPO in 2013 per country of residence of the first named patentee.

The main staff union active within the EPO is the "Staff Union of the European Patent Office" (SUEPO).[51]

As an international organization, EPOorg enjoys immunity and national courts have -in principle- no jurisdiction regarding disputes in which EPO is a party. Labour disputes can be submitted by employees to the Administrative Tribunal of the International Labour Organization (ILOAT).[52] Courts in the Netherlands have however on occasion taken jurisdiction when it found a breach of fundamental principles of human rights, based on European Court of Human Rights case law. Jurisdiction was assumed for example because the ILOAT procedure (of over 3 years) was too lengthy for a process involving health issues[53] or regarding a conflict with labour unions, as no appeal to ILOAT or any other judicial organization was possible.[54] The background to the latter judgment was the ongoing conflict between EPO staff and management, in particular the refusal of EPO to recognise the staff unions, blocking of e-mail communication between the unions and their members and restriction of the right to strike.[55] After service of the judgement to EPO, the then Dutch Minister of Security and Justice, Ivo Opstelten, ordered bailiffs not to perform service of the judgment.[clarification needed] Opstelten's intervention was criticised by a number of Dutch legal experts including Cedric Ryngaert, Professor of International Law in Utrecht, who considered the Minister's intervention to be unusual: "Basically he erodes the power of the Court. International organisations are going to increasingly put themselves above the law, which is already a problem now. Opstelten relies on an Act from the seventies, which must be applied dynamically. Instead he takes a very conservative view."[55]

Labour relations at the EPO during the presidency of Benoît Battistelli have been strained and marked by conflict with a noticeable escalation during 2014.[56][57][58][59] Staff discontent has been attributed to Battistelli's style of management which, according to reports in the German newspapers Die Zeit and Die Welt, was perceived by staff as being unduly autocratic and unsuited to a European intergovernmental body such as the EPO.[60][61][62]

Concern has been expressed regarding the high number of suicides of EPO employees, five in over three years.[51][63] The EPO President Battistelli dismissed the suggestions -by EPO staff union SUEPO- of a possible link between the suicide and working conditions at the EPO as "totally inappropriate" and accused the staff union of "abusing a personal tragedy and inciting controversy". The EPO staff union SUEPO said that a direct link between the suicide and the working conditions had not been demonstrated but that the Dutch Labour Inspectorate should be given the opportunity of investigating the matter.[64]