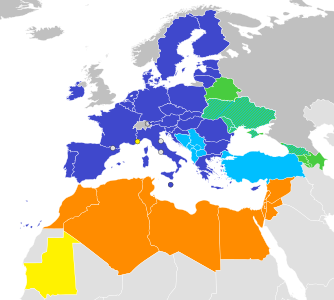 The countries covered include Algeria, Morocco, Egypt, Israel, Jordan, Lebanon, Libya, Palestine, Syria, Tunisia in the South and Armenia, Azerbaijan, Belarus, Georgia, Moldova, Ukraine in the East. Russia has a special status with the EU-Russia Common Spaces instead of ENP participation.

The EU offers financial assistance to countries within the European Neighbourhood, so long as they meet the strict conditions of government reform, economic reform and other issues surrounding positive transformation. This process is normally underpinned by an Action Plan, as agreed by both Brussels and the target country. The ENP does not cover countries which are in the current EU enlargement agenda, the European Free Trade Association or the western European microstates.

The EU typically concludes Association Agreements in exchange for commitments to political, economic, trade, or human rights reform in a country. In exchange, the country may be offered tariff-free access to some or all EU markets (industrial goods, agricultural products, etc.), and financial or technical assistance.

The countries covered include Algeria, Morocco, Egypt, Israel, Jordan, Lebanon, Libya, State of Palestine, Syria, Tunisia in the South and Armenia, Azerbaijan, Belarus, Georgia, Moldova, Ukraine in the East.[1] Russia has a special status with the EU-Russia Common Spaces instead of ENP participation.

On 25 May 2011, the European Commission launched what it described as a new and ambitious European Neighbourhood Policy, backed by more than €1.2 billion in new funding, bringing the total to almost €7 billion. The main priorities and directions of a revitalised ENP strategy are set out in the Joint Communication by the European Commission and the High Representative for Foreign Affairs, titled "A new response to a changing Neighbourhood". It seeks to strengthen individual and regional relationships between the EU and countries in its neighbourhood through a "more funds for more reform" approach – making more additional funds available, but with more mutual accountability.

In the South the first comprehensive policy for the region was the Euro-Mediterranean Partnership (or Barcelona Process) a wide framework of political, economic and social relations between member states of the EU and countries of the Southern Mediterranean. It was initiated on 27–28 November 1995 through a conference of Ministers of Foreign Affairs, held in Barcelona. Besides the 28 member states of the European Union, the remaining "Mediterranean Partners" are all other Mediterranean countries including Libya (which had 'observer status' from 1999 to 2012).

In the East the Eastern Partnership (EaP) is a policy initiative launched at the Prague Summit in May 2009 that aims to bring the 6 Eastern neighbours - Armenia, Azerbaijan, Belarus, Georgia, Republic of Moldova and Ukraine - closer to the EU. It represents the Eastern dimension of the ENP and strengthens bilateral relations between the EU and its partners.

In March 2015 the European Commission launched a review of the principles on which the policy is based as well as its scope and how its instruments should be used. The consultation [2] follows four priorities: differentiation; focus; flexibility; ownership and visibility. A Communication setting out proposals for the future direction of the ENP will follow in autumn.

Giving incentives and rewarding best performers, as well as offering funds in a faster and more flexible manner, are the two main principles underlying the European Neighbourhood Instrument (ENI) that came into force in 2014.[3] It has a budget of €15.4 billion and provides the bulk of funding through a number of programmes. The ENI, effective from 2014 to 2020, replaces the European Neighbourhood and Partnership Instrument – known as the ENPI. This cooperation instrument continues to be managed by DG Development and Cooperation - EuropeAid, which turns decisions taken on a political level into actions on the ground. ENPI funding approved for the period 2007-2013 was €11.2 billion.

Kazakhstan's Foreign Ministry has expressed interest in the ENP[4] and some MEPs have also discussed Kazakhstan's inclusion in the ENP.[5]

The EU Neighbourhood Info Centre was launched in January 2009 by the European Commission to make more known the relationship between the EU and its Neighbours. 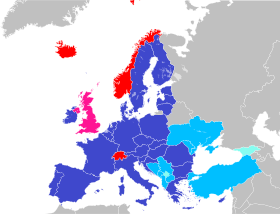 In recent history, such agreements are signed as part of two EU policies: Stabilisation and Association process (SAp) and European Neighbourhood Policy (ENP). The countries of the Mediterranean and the East European EU neighbours (including South Caucasus, but excluding Russia that insists on creating four EU-Russia Common Spaces) are covered by ENP through the External Relations directorate-general. In the ENP Association Agreements (as in similar AAs signed with Mexico and other states) there is no mention of EU membership—this is a concern only to the European ENP states, because for the Mediterranean they cannot join the union in its current form because they are not located in Europe. The ENP AAs are similar to the Partnership and Cooperation Agreements signed with CIS states in the 1990s and to the multiple other AAs governing the relations between the EU and other third countries. The ENP stipulates that after signing of AA with a particular country the EU will make a Country Report and then the two sides will agree on an Action Plan drafted by the EU (including particular reforms, actions and also aid by the EU) for the next three to five years.

Both the SAA and ENP AP are based mostly on the EU's acquis communautaire and its promulgation in the cooperating states legislation. Of course the depth of the harmonisation is less than for full EU members and some policy areas may not be covered (depending on the particular state).

According to EUobserver the ENP countries may be divided into two groups—European states with explicitly stated EU membership possibility for the long term and Mediterranean states with no such statement in the Action Plans. This division is obvious in the two groups for multilateral activities that are meant to supplement the bilateral ENP Action Plans—the Eastern Partnership and the Union for the Mediterranean.[6]

Association Agreements have to be ratified by all the EU member states. AA signed with the Mediterranean states also include a Free Trade Agreement between the EU and the third country. For the East European EU neighbours covered by the ENP such provisions are expected for some of the next Action Plan periods.

Although the Eastern Partnership was inaugurated on 7 May 2009, academic research critically analysing the policy became available by early 2010 (see Elena Korosteleva#Building Research Excellence in Russian and East European Studies at the Universities of Tartu, Uppsala and Kent). Research findings from a UK ESRC research project examining the EU's relations with three Eastern Partnership member states—namely, Belarus, Ukraine, and Moldova—notes both conceptual and empirical dilemmas.[7] First, conceptually the EU has limited uniform awareness of what it is trying to promote in its eastern neighbourhood under the aegis of "shared values", "collective norms", and "joint ownership". Secondly, empirically, the EU seems to favour a "top-down" governance approach (based on rule/norm transfer and conditionality) in its relations with outsiders, which is clearly at odds with a voluntary idea of "partnership", and explicitly limits the input of "the other" in the process of reform.[8] This has led critics to argue that the neighbourhood policies are subordinated to the EU's interests —and values—, whereas the role of the "partners" is at best secondary. [9]

The Arab Spring in North Africa has shed light on the close personal and business ties between governing elites in EU member states and their Mediterranean counterparts. For example, French Foreign Minister Michèle Alliot-Marie was forced to resign due to public outrage over her links to the ousted Ben Ali regime in Tunisia.[10] In 2008, the EU tried to negotiate an association agreement with Libya and earmarked €60 million in ENPI funds to the country over the 2011–2013 period.[11]