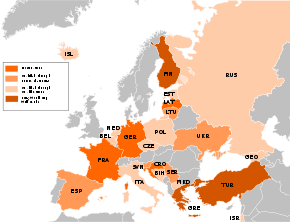 Qualified teams for the EuroBasket 2015

EuroBasket 2015 was the 39th annual edition of the EuroBasket championship that is organized by FIBA Europe. It took place in Croatia, France, Germany, and Latvia, making it the first EuroBasket held in more than one country. It started on 5 September and ended on 20 September.

The top two teams (Spain and Lithuania) qualified to the 2016 Summer Olympics. The next five teams (France, Serbia, Greece, Italy and the Czech Republic) advanced to the World Olympic Qualifying Tournaments. Latvia and Croatia later qualified due to Serbia and Italy hosting two of the Olympic qualifying tournaments while Turkey also qualified as an invitee.

Spain won their third title by defeating Lithuania 80–63 in the final.[1] France won bronze on home soil defeating Serbia (81–68).[2] The final game was held in the Stade Pierre-Mauroy and set a new record for the highest attendance in a EuroBasket game, with 26,922.[3] Pau Gasol was named the tournament's MVP.

On 18 December 2011, FIBA Europe decided to let Ukraine host EuroBasket 2015, after France, Croatia, Germany and Italy withdrew their joint bid.[4] On 19 March 2014, tournament director Markiyan Lubkivsky announced that EuroBasket 2015 would not take place in Ukraine because of the political and financial crisis and the championship would be relocated.[5][6] But later, FIBA Europe was forced to deny reports that Ukraine had given up the hosting rights for EuroBasket 2015 due to the continuous political situation and security issues in Ukraine.[7] On 13 June 2014, FIBA Europe officially announced that Ukraine would not be hosting the championships.[8]

Sixteen countries expressed an initial interest to bid for the relocated event. National Federations were called by FIBA Europe to officially bid for hosting the tournament or parts of the tournament until 31 July 2014. The next day FIBA Europe announced eight official bids from potential organizers:[9]

All interested federations were provided the option to bid to stage either one of the four groups in the Group Phase of the tournament, one of the groups and the Final Phase, only the finals, or the entire tournament. FIBA Europe was scheduled to officially announce the details of the bids after 27 August 2014.[9]

On 8 September 2014, it was announced that the FIBA EuroBasket 2015 tournament would be hosted in Germany (Berlin), Croatia (Zagreb), Latvia (Riga) and France (Montpellier), with each of the countries hosting one respective group during the group stage of the tournament. France would be the hosts of the finals in the knock-out phase in the city of Lille at the multi-functional Stade Pierre-Mauroy, which has a 27,000 capacity for basketball. [10]

Qualification for the tournament took place in two phases; the first featured 13 teams who failed to qualify for FIBA EuroBasket 2013, the winner of which qualifying directly for the finals. The remaining teams then went into qualification with the remaining FIBA Europe sides. 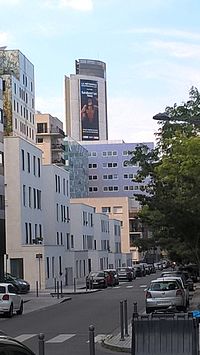 Publicity onto the North Regional Council in Lille.

The best four teams of each group advance to the knockout stage.[17] 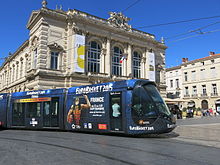