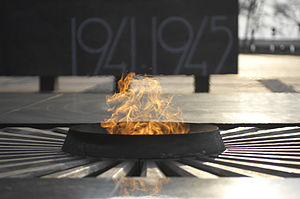 An eternal flame is a flame, lamp or torch that burns for an indefinite time. Most eternal flames are ignited and tended intentionally, but some are natural phenomena caused by natural gas leaks, peat fires and coal seam fires, all of which can be initially ignited by lightning, piezoelectricity or human activity, some of which have burned for a long time.

In ancient times, eternal flames were fueled by wood or olive oil;[citation needed] modern examples usually use a piped supply of propane or natural gas. They consume oxygen, transforming it to carbon dioxide. Human-created eternal flames most often commemorate a person or event of national significance, serve as a symbol of an enduring nature such as a religious belief, or a reminder of commitment to a common goal, such as diplomacy. The concept is the same as that of a candlelit vigil.

The eternal fire is a long-standing tradition in many cultures and religions. In ancient Iran the atar was tended by a dedicated priest and represented the concept of "divine sparks" or Amesha Spenta, as understood in Zoroastrianism. Period sources indicate that three "great fires" existed in the Achaemenid era of Persian history, which are collectively considered the earliest reference to the practice of creating ever-burning community fires.[1]

The eternal flame was a component of the Jewish religious rituals performed in the Tabernacle and later in the Temple in Jerusalem, where a commandment required a fire to burn continuously upon the Outer Altar.[2] Modern Judaism continues a similar tradition by having a sanctuary lamp, the ner tamid, always lit above the ark in the synagogue. After World War II, such flames gained further meaning, as a reminder of the six million Jews killed in the Holocaust.

The Cherokee Nation maintained a fire at the seat of government until ousted by the Indian Removal Act in 1830. At that time, embers from the last great council fire were carried west to the nation's new home in the Oklahoma Territory. The flame, maintained in Oklahoma, was carried back to the last seat of the Cherokee government at Red Clay State Park in south-eastern Tennessee, to the Museum of the Cherokee Indian in Cherokee, North Carolina, and to the Cherokee Nation Tribal Complex in Talequah, Oklahoma.[3]

In China, it has at times been common to establish an eternally lit lamp as a visible aspect of ancestor veneration; it is set in front of a spirit tablet on the family's ancestral altar.[4] 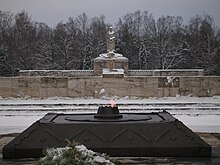 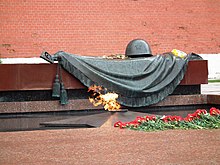 Eternal flame at the Tomb of the Unknown Soldier, Moscow 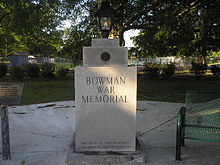 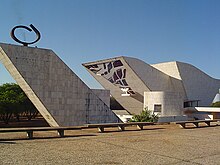 The Pantheon of Fatherland and Freedom, Tancredo Neves, in Brasília 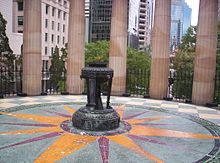 Eternal flame at the Shrine of Remembrance, Brisbane, Queensland, Australia 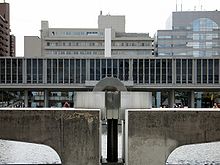 Peace Flame at the Peace Memorial Museum in Hiroshima, Japan 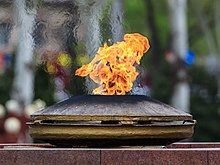 An eternal flame is featured on the New Design/BSP series Philippine 1000-peso bill. 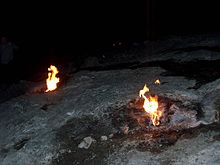 The Darvaza gas crater, near Derweze, Turkmenistan, has been burning since 1971.