Construction cost $23 million MXN when the stadium was completed in 1967. The official dedication occurred on May 30 of that year. Originally planned to hold nearly 90,000 spectators, the plan was downscaled to meet financial needs.[3] After the 1986 FIFA World Cup, the stadium's official capacity was 52,000. Later, modifications were made to improve the fan experience and increase safety, resulting in a reduced capacity; the stadium currently seats 41,615.[3]

In 2016, a proposal was floated to build a replacement venue for Tigres that would sit atop the Santa Catarina River running through central Monterrey. The proposed stadium would have seated 80,000. The National Water Commission, CONAGUA, rejected the project as potentially affecting the flow of the river (the dry riverbed was infamously developed with parks and parking facilities which were swept away in 2010's Hurricane Alex). With the rejection of the stadium on the river, renovation projects may be considered for the existing stadium.

The stadium is the home venue for the Tigres UANL, playing in the Liga MX. It was given to Sinergia Deportiva, the for-profit company that administers Tigres, as part of the club's assets.

Between 1973 and 1980, C.F. Monterrey, the other top-flight soccer club in Monterrey, also used the Estadio Universitario. The club departed to return to the Estadio Tecnológico beginning in September 1980. 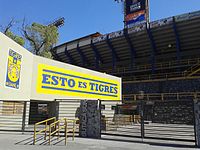 South entrance to the Estadio Universitario

While the Auténticos Tigres, the university's American football team, have their own stadium (the Estadio Gaspar Mass), the Estadio Universitario is normally used for playoff games and ONEFA championships. One exception was the 2016 ONEFA championship game, played at Gaspar Mass due to a playoff soccer game scheduled for the next day.[4]

On August 5, 1996, the stadium hosted the Kansas City Chiefs and Dallas Cowboys in the American Bowl, with the Chiefs winning by a score of 32-6. The event recorded 52,247 paid tickets.

British rock band Queen performed during The Game Tour on October 9, 1981, to more than 150,000 fans on their first and only tour of Mexico.