The Estadio Cuscatlán is a football stadium located in San Salvador, El Salvador. It is the largest stadium in Central America with a capacity of 53,400.[1] The stadium is the home ground of the El Salvador national football team and Alianza F.C.[2]

Cuscatlán stadium was first developed as a replacement to what at the time was El Salvador's largest stadium, Estadio Nacional de la Flor Blanca (now known as Estadio Jorge "Mágico" González). Its creation was made possible by EDESSA (Estadios Deportivos de El Salvador) who in 1969 first proposed the idea of a new national stadium.

Construction began on 24 March 1971, with then-president of El Salvador General Fidel Sánchez Hernández laying the first stone. After 5 years of building, the stadium was opened and held its very first game on 24 July 1976. This day saw German Bundesliga champions Borussia Dortmund play the El Salvador national team, with the match ending 2–0 to the German side.

On 25 May 1978, EDESSA agreed to and signed a 599-year lease of the stadium to CLIMA (Asociación de Clubes de Liga Mayor A'). As a result, CLIMA is now the operator of the stadium, and controls what events are held there. 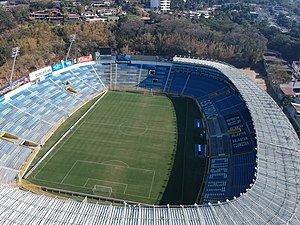 The playing field of the stadium

The stadium, with a capacity of 53,400 is the largest football venue in Central America.

It was announced on 16 November 2007 that Estadio Cuscatlán would become the first football stadium in Central America and Caribbean to have a large LED screen where the supporters can view the action. The screen is 40 meters in height and width and was completed in March 2008.[3]

The modernization also extends to the pitch, which includes:

The stadium's capacity has been the topic of much dispute, with many saying that its official capacity is not accurate. As the stadium only has seats available in certain sections, it is difficult to estimate the maximum capacity when trying to take into account how many spectators could fit into the sections without seats. The seating capacity is between 45,000 and 53,400 people. FIFA regulates the capacity, setting a maximum of about 45,000.

The stadium has the following distribution on its premises:

The stadium itself sits on an area of land roughly 15 square blocks (30 hectares) in size. Not only does it accommodate the stadium itself, with its parking lot (8,500 cars capacity), but also two other football pitches. One of these is used for training by club sides, to limit damage to the stadium ground itself. The other ground is used for junior football. A beach soccer field is set to be built within the next months, the main idea is becoming Estadio Cuscatlán a sport venue.

Although Cuscatlán stadium was primarily built to be just a football stadium, it is now also used to cater for other events. Apart from football, it is also used for concerts, cultural events, religious events and political rallies. In 2005, Colgate broke the World Record of most people brushing their teeth at the same time in this stadium.[4]