Esperanza Base (Spanish: Base Esperanza, 'Hope Base') is a permanent, all-year-round Argentine research station in Hope Bay, Trinity Peninsula (in Graham Land on the Antarctic Peninsula). It is one of only two civilian settlements in Antarctica (the other being the Chilean Villa Las Estrellas). The base's motto is Permanencia, un acto de sacrificio ('Permanence, an act of sacrifice'). 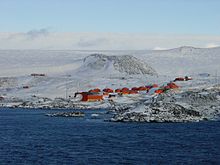 Esperanza Base seen from Hope Bay

Built in 1953,[1][2][3] the base houses 55 inhabitants in winter, including 10 families and 2 school teachers. Provincial school #38 Presidente Raúl Ricardo Alfonsín (formerly named Julio Argentino Roca) was founded in 1978 and acquired independent status in 1997. It maintains the furthest South Scout troop. The base has an Argentine civil register office where births and weddings are recorded.[4] The base has tourist facilities that are visited by about 1,100 tourists each year. The LRA 36 Radio Nacional Arcángel San Gabriel radio station started transmitting in 1979 and currently broadcasts on shortwave and FM. A wind generator was installed in 2008, mounted by INVAP.[5]

The 43 buildings of the station have a combined space of 3,744 square metres (40,300 sq ft) covered;[6] 18,000 litres (4,800 US gal) of fuel are used annually by the four generators to produce electricity for the station. Research projects include: glaciology, seismology, oceanography, coastal ecology, biology, geology, and limnology.

This place was also the scene of the first ever shots fired in anger in Antarctica in 1952 when an Argentine shore party fired a machine gun over the heads of a British Antarctic Survey team unloading supplies from the John Biscoe. The Argentines later extended a diplomatic apology, saying that there had been a misunderstanding and that the Argentine military commander on the ground had exceeded his authority. A series of incidents in the area had begun during World War II. The Antarctic Treaty of 1959, treats the continent as a laboratory open to all, and provides that "no acts or activities ... shall constitute a basis for asserting, supporting or denying a claim to territorial sovereignty."[7]

Main article: List of people born at Esperanza Base

The base was the birthplace of Emilio Palma, the first person to be born in Antarctica. There have been at least ten other children born at the base.[8][9]

Like the rest of the Antarctic Peninsula, the base has a polar climate characterized by strong winds that descend downwards from the Antarctic ice sheet.[10] These winds can exceed 250 km/h (160 mph), leading to blowing snow and reduced visibility.[10] The climate is classified as a polar tundra (ET) climate in the Köppen system.[11]

A group of items or structures of historic significance at, or close to, the base have been designated a Historic Site or Monument (HSM 40), following a proposal by Argentina to the Antarctic Treaty Consultative Meeting. These comprise a bust of General San Martin, a grotto with a statue of the Virgin of Lujan, a flagpole erected in 1955, and a cemetery with a stele commemorating Argentine expedition members who died in the area.[22]

Refuge General Martín Güemes is the name given to two shelters in Antarctica. The first one is covered by ice, the second one is active. The refuge is Administered by the Argentine Army and depends on Esperanza Base, which is responsible for maintenance and care. The two refuges are located on the Tabarin Peninsula on the eastern tip of the Trinity Peninsula on the Antarctic Peninsula 14 kilometres (8.7 mi) south of Esperanza.The refuges pay homage to Martín Miguel de Güemes, a military man who served an outstanding role in the Argentine war of independence.